In plasma wakefield acceleration research we study the use of plasmas for accelerating charged particle beams using electric fields a thousand times stronger than what is possible than with conventional microwave based accelerator technology.  The main challenge is to demonstrate that we can harvest these very strong field in an energy efficiency way, and at the same time preserve a very good particle beam quality.  If this can be achieved, plasmas may revolutionize the field of particle accelerators and allow accelerators to be made more compact, more energy efficient and cheaper.  This is particularly important for advances in high energy particle physics, where powerful but efficient accelerators are required in order to study lepton interactions at the TeV-scale and beyond. 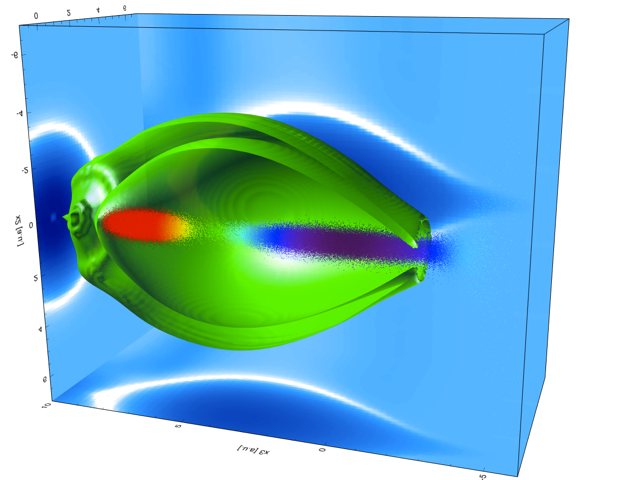 In order to fully understand complex beam-plasma interactions, experiments must be performed to investigate this very particular regime of plasma physics.  A typical plasma wakefield acceleration experiment consists of the plasma itself plus a driving force which is used to set up a very strong field plasma wave, called a "wake" in this context.   As plasma source, a gas, ionized by a high power laser is often used.  As driver, either a TW-scale laser  ("laser driven") or a high intensity charged particle beam is used ("beam driven").

* the AWAKE project located at CERN, where a highly energetic proton bunch generated by the CERN Super Proton Synchrotron is used as a driver

* the E200 experiment located at FACET/SLAC, where high intensity electron or positron bunches are used as drivers