English version of this page

The Geology Building – History and facts

The Department of Geosciences at the University of Oslo is located in the Geology Building, an educational building that houses auditoriums and seminar rooms, laboratories and other infrastructure, computer labs and offices. 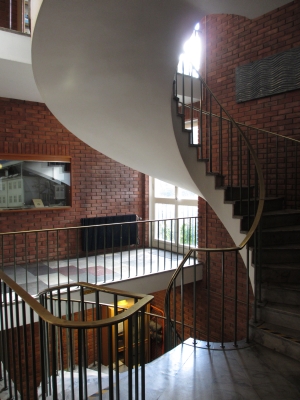 The Geology Building is an educational building from 1957. The officially opening date was February 12 in 1958. The Geology Building had originally two wings when it was new. In the 1970s there came more students and it was necessary to build a new wing. The third wing to the east was built in 1985 – 1986.

The floor in the entrance hall of the Geology Building has an exceptionally fine mosaic with different kinds of stones, from marble, schist, soapstone, gneiss to granite. The mosaic contains of a total of 139 types of stones from all over Norway.

The floor mosaic gives a interesting view of Norwegian building stones with all its variations in colours, texture and finish. Information about where the stones originally comes from is documented in this poster (pdf).

The floor mosaic is drawed of the architect Finn Bryn and made by AS Johs. Grønseth & Co. The mosaic was once financed by the Norwegian stone industry. See details of the mosaic floor in the picture below.

The Geology Building, some facts:

Architect:
Finn Bryn (about the architect, in Norwegian)