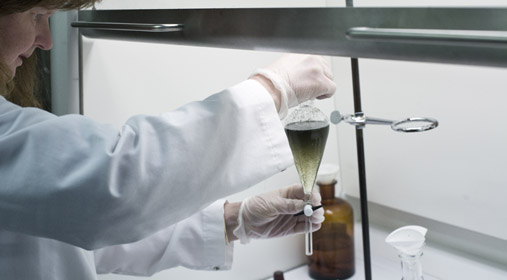 The main mineral analyzed in the TIMS U-Pb Isotope Geology Laboratory is zircon, essentially of any age (so far from 3.5 Ga to 100 ka), by ID-TIMS following the method of Krogh (1973) adapted for smaller samples and modern conditions.

Zircons are measured as multigrain fractions, as single grains, or as fragments of grains, depending on the problem, and boundary conditions. A ‘large sample’ is one with ³1 ng of Pb, very small samples have Pb amounts close to the Pb blank level of 0.5 to 1 pg (the U blank is about 0.1 pg). The threshold separating the measurement of 207Pb on Faraday during static multicollection from a (less precise) measurement on the multiplier, lies at about 10-20 pg, using Si-gel prepared following Gerstenberger and Haase (1997).

For the isotope dilution analyses we use a mixed 202Pb-205Pb-235U – spike, which enables us to normalize the Pb internally using the 202Pb/205Pb ratio. The reproducibility of Pb and U measurements in static Faraday mode on our mass spectrometer is about ± 0.06 % / a.m.u., based on regular measurement of standard solutions (NBS982 and U500), reference samples and reproducibility tests. Reproducibility on the multiplier is about 0.1 % / a.m.u., but depends strongly on a strict control of the drift and non-linearity of the device.

Zircon samples are prepared by hand-picking under the binocular microscope and they are normally air abraded before analyses. We have also started applying the alternative chemical abrasion of Mattinson (annealing of zircon at high temperature followed by stepwise partial dissolution). Zircon is dissolved in HF (+HNO3) in Teflon bombs at 194oC for 3 to 5 days and equilibrated in 3 N HCl at the same temperature. Samples with weights of less than 5 mg are generally loaded directly on Re filaments for the isotopic measurement, larger samples are purified in anion exchange resin with an HCl procedure.

Titanite is dissolved in HF (+HNO3) in Savillex vials on a hot plate and the chemical separation is carried out using a novel single stage HBr-HCl procedure with anion exchange resin. Monazite is dissolved with 6N HCl in Savillex vials on a hot plate and commonly put through the same separation as titanite. Other minerals processed include rutile, baddeleyite and xenotime (all dissolved with HF in bombs) and perovskite (HF on hot-plate), but basically any mineral containing some U and /or Pb is done if suitable to solve specific problems.

Krogh, T.E., 1973. A low contamination method for hydrothermal decomposition of zircon and extraction of U and Pb for isotopic age determinations. Geochimica et Cosmochimica Acta 37, 485‑494.