Doctoral candidate Bjørgunn Heggem Dalslåen at the Department of Geosciences, Faculty of Mathematics and Natural Sciences, is defending the thesis The Early to Late Ordovician rock record of the Oppdal area, Scandinavian Caledonides: Explosive volcanism, element recycling and basin infill during closure of the Iapetus Ocean for the degree of Philosophiae Doctor. 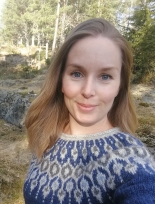 This PhD defence and trial lecture is held only physically, with the possibility to follow on Zoom. All program for the completion of the disputation will take place with attendance in auditorium 1 in The Geology Building.

A digital version of the thesis can be ordered from the link below:

The Early to Late Ordovician rock record of the Oppdal area, Scandinavian Caledonides: Explosive volcanism, element recycling and basin infill during closure of the Iapetus Ocean

This thesis provides a detailed study of the Ordovician rocks of the Oppdal area, central Norwegian Caledonides, which records the evolution of a section across the Laurentian margin after formation and obduction of the Løkken–Vassfjellet–Bymarka ophiolite now preserved in the western Trondheim Nappe Complex (TNC). By extensive field-work, geochronology and whole rock geochemistry a revised map and stratigraphy of the geology in the area has been made, the formation age of the rocks has been constrained, and the processes active during their formation have been examined.

The KVS has a peculiar geochemistry: extreme enrichment in elements commonly associated with evolved continental/arc crust (e.g. K-Th-U-LREE), combined with a high content of Mg, Cr and Ni which together point to a mantle source and limited fractionation. By comparison with modern analogues, it is suggested that large amounts of continental material was subducted, partially melted and reacted with the mantle to form anomalous mantle domains which sourced the enriched rocks, whereas the Trollhøtta MORB was sourced from “normal” mantle domains, all in an extensional setting possibly related to the death of a subduction zone.

Based on geochemical and lithological similarities the Trollhøtta metabasalts are correlated with the Støren greenstones s.s., and the KVS is correlated with the Hølonda Porphyrites of the Hovin Group which places formation of the Skarvatnet-Trollhøtta system close to the Laurentian margin. Proximity to Laurentia is furthermore supported by detrital zircon data from the Trollhøtta unit.

The Skuggliberga unit was deposited after accretion, folding and erosion of the Skarvatnet-Trollhøtta units, and consist of a cross-stratified to massive sandstone and andesitic pyroclastic rocks, formed in a continental arc setting >435 Ma, before the initial collision between Laurentia and Baltica in which the units were thrusted onto the Baltican plate along with the rest of the western TNC.

Other photo material: Figure with description and credit as specified in the article above, size 1000px.

Department of Geosciences, University of Oslo
E-mail this page

Lecturer Steven Hollis, School of Geosciences, The University of Edinburgh