With this research we aim to identify precursory signals of failure embedded in the characteristics of localizing fracture and strain networks. Our ultimate goal is to recognizing the signals that indicate the timing of catastrophic failure in the Earth, such as earthquakes. 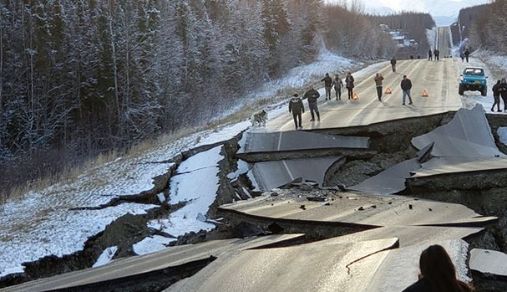 Destruction and collapse of a road after a 7.0 magnitude earthquake in Alaska, USA, November 2018. Source: nbcnews.com

Over the past three years, we have conducted 40 tomography experiments on rock samples and performed DVC on 24 of these experiments. The resulting experimental data, including time series of fracture network geometries and local strain fields, provide unique access to coalescing fractures and localizing strain at spatial and temporal resolutions previously unavailable. This enables quantifying the dynamics of the transition from distributed to localized deformation, including coalescing fracture networks and concentrating strain distributions.

The objectives and background for the project are given below

The ultimate goal of this project is to identify precursory signals of failure embedded in the characteristics of localizing fracture and strain networks.

The primary objectives that will facilitate this goal are to:

These three objectives aim to identify the criteria that govern fracture development and strain localization, and so highlight precursory signals of failure.

The ability of fracture networks to coalesce controls the structural integrity of engineered structures, and crustal km-scale fault systems. Several dominant theories have emerged in the past century to predict fracture propagation. Linear elastic fracture mechanics can describe the potential of propagation of one or a few fractures within linear elastic material (e.g., Griffith, 1921; Irwin, 1957). However, these fractures must be significantly larger than the length of preexisting weaknesses that permeate rocks and most engineering materials. Consequently, such formulations do not capture details of the fracture coalescence process, including the precursors that signal imminent macroscopic failure. An alternative theory describes deformation localization as the onset of instability in the constitutive descriptions of homogeneous deformation (e.g., Rudnicki & Rice, 1975; Lyakhovsky et al., 2011).

To constrain the criteria that determine fracture development, experimentalists have worked to infer the geometry of evolving fracture networks using acoustic emissions (e.g., Lockner et al., 1991), observations of the surface of uniaxial experiments (e.g., Wong et al., 2001), or ex situ examinations of rock cores at various stages of deformation (e.g., Mair et al., 2002). However, the interaction and coalescence of some fractures may produce acoustic energy below the detection limit, the exposed 2D geometry of fractures may misrepresent the 3D geometry within the rock core, and unloading and subsequent sample preparation may induce artificial deformation. Despite these drawbacks, previous analyses have identified several criteria that can control fracture coalescence, and match some aspects of the three aforementioned theories, including the spatial distribution and orientation of growing fractures with respect to an external stress field, the length and shape of fractures, the energetic cost of fracture propagation and interaction, and the existence of pre-existing mechanical weaknesses in the host rock (e.g., Anderson, 1942; Hubbert, 1951; Sih, 1974; Rybicki & Kanninen, 1977; Raju & Newman, 1979; Dahlen, 1984; Cooke & Madden, 2014; Renard et al., 2018b).

Few experimental analyses have been able to directly observe evolving 3D fracture networks and their corresponding strain fields in natural rocks as they are triaxially compressed toward failure. Consequently, the geophysical community lacks a comprehensive, quantitative understanding of the criteria that govern the transition from distributed to localized deformation. In addition, previous analyses have not been able to directly compare the relative importance of recognized criteria, such as fracture length and orientation, on the dynamics of fracture coalescence to each other. This gap in knowledge forces scientists to categorize a multitude of properties of fault networks in order to estimate the potential of fault interaction, and ultimately constrain seismic hazard.

The name of the project is Emergent networks: Predicting strain localization and fracture network development.

Funding from the Research Council of Norway as part of the Young Research Talents program, with project number 300435.

The project is carried out in collaboration with Professor Yehuda Ben-Zion at the University of Southern California, USA.