CEED participates in the SUBITOP - European Training Network (ETN) with several other institutions. The network will provide a framework for training and career development of young researchers from different institutions in Europe, for research in geodynamics, geophysics, geology and geomorphology. 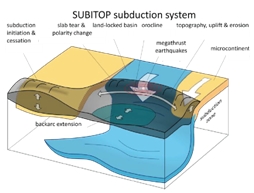 Changes in topography, like mountain building or basin formation are often due to subduction process. These processes may determine the patterns and intensity of geological hazards such as earthquakes, volcanic activity and landsliding. On a longer timescale, they can modify the shape of the continental margins and lead to rifting and oceanic basin formation.

Studying present day and ancient subduction zones and the links with short and long term changes in topography and associated processes is the aim of the newly granted European Training Network project. The network will involve 10 European academic groups from 8 countries and will train 15 doctoral students.

The Centre for Earth Evolution and Dynamics (CEED) at the Department of Geosciences is one of the SUBITOP partners and will train an Early Stage Researcher (ESR) by studying the formation of microcontinents in subduction systems using field observations and kinematic, analogue and numerical modeling. The team will study ancient subduction systems (including the Caledonides) and more recent examples like the Mediterranean region.

The SUBITOP network will also impart essential communication, outreach and career management skills, and first-hand experience of the private sector through project-specific secondments and co-supervision by industry partners, and embed its ESRs in the active TOPO-Europe research community.

SUBITOP, is an acronym for: Understanding subduction zone topography through modelling of coupled shallow and deep processes

The principal investigator at CEED is Carmen Gaina. Other project participants from CEED are Torgeir Andersen, Trond. H. Torsvik, Roy Gabrielsen and Susanne Buiter from the Geological Survey of Norway (NGU) and CEED.

The SUBITOP - ETN will be financed by Marie Skłodowska-Curie actions (MSCA), in the EU Horizon 2020 programme.

10 European institutions will be involved in the SUBITOP network collaboration.