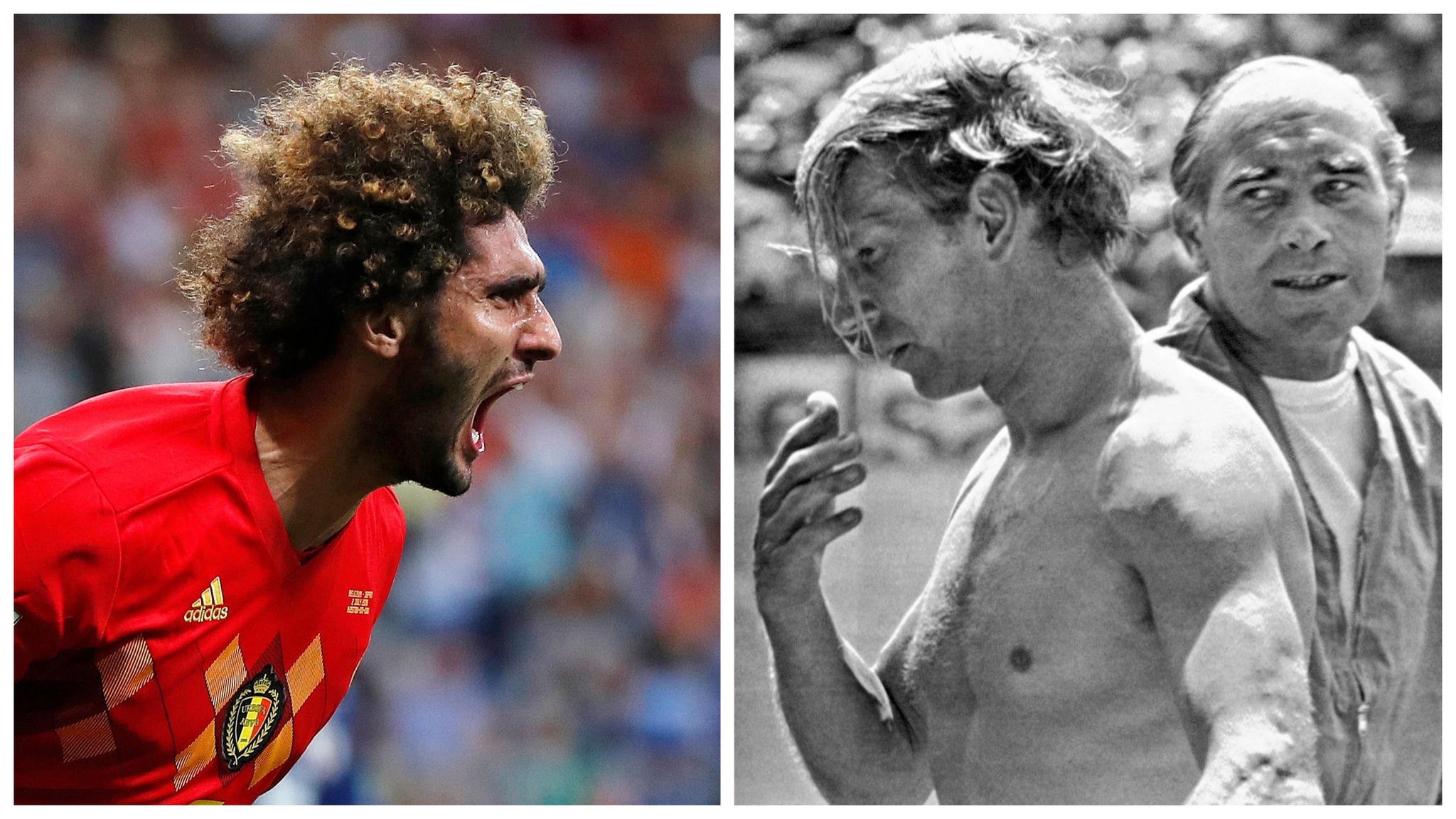 The Beautiful Game of Poisson Processes

Goals scored in football games (I'll stick to the term used everywhere apart from Over There) can be modelled well via Poisson processes. So teams A and B have independent Poisson processes \(X=\{X(t)\colon t\ge0\}\) and $Y=\{Y(t)\colon t\ge0\}$, with constant rates $\lambda_A$ and $\lambda_B$, and the game is watched by the appropriate number of millions of probabilists and statisticians in the stands and on their sofas until one sees $(X(T),Y(T))$ at match end, with $T$ equal to 90 minutes plus typically a couple of extra minutes, called injury time. In the Claeskens and Hjort (2008) book I go into several attempts at modelling (\(\lambda_A,\lambda_B\)) in terms of the FIFA ranking scores, read off say two weeks before the match, with several models taking the form

with different versions of the $r(\cdot)$ function. More complex models emerge by including other covariates and perhaps prior speculations for the $\lambda_A$/$\lambda_B$.

Aftenposten views the 0-2 to 3-2 event as a veritable Breaking the Curse occasion. Now, many of us might not feel that the Curse word applies so well to results of sports (with the exception of Pedersen against the Netherlands, of course), and most of us never quite have mustered the curiosity or analytical powers to think, each day for 48 years, that going from 0-2 to 3-2 for two Poisson processes of about equal intensities was so super-special that it called for the C-word. So my statistical duty here is to look into that probability, that a match where team B comes to 2-0 experiencing team A hitting back and landing 3-2. Of course such a probability depends on the relative ream strengths, via $\lambda_A$ and $\lambda_B$, but in such a context it is natural to work out the required chances assuming these are equal.

In the catalogue I once compiled, with match results along with prior FIFA scores (and rather manually, as it was cumbersome to find the FIFA numbers from a collection of different files), to illustrate various model building and model selection principles in the Claeskens and Hjort book, there were 627 goals scored in 254 matches, which means an average of 2.468 goals per match, which I here translate into a common Poisson intensity parameter of $\lambda=1.234/90$ per team. Over the next 60 seconds of match time, you'll see team A score with probability about 1.4%, and, of course, not score, with probability about 98.6%.

The Curse Claim does not relate to just any match, of course, but to those where team B comes to 2 before team A has scored a single goal yet, so let's first find that probability. It is

with $g_2(s,\lambda)=\lambda^2 s\exp(-\lambda s)$ the gamma density $(2,\lambda)$, a sum of the two independent exponential waiting times between goals for team B, and with the $\exp(-\lambda s)$ term the probability that team A has not yet scored in the time interval $[0,s]$. An integration exercise yields 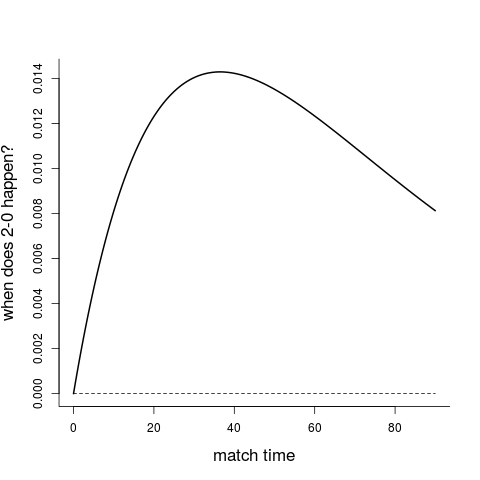 We are also learning that in games where team A experiences a 0-2 situation against team B, then the random timepoint $S$ where this occurs has the following probability density,

Team B now leads 2-0, at time point $S$, and team A better hurry up to Break the Curse, to Unhex the Hex, to Despell the Spell. It's not easy: 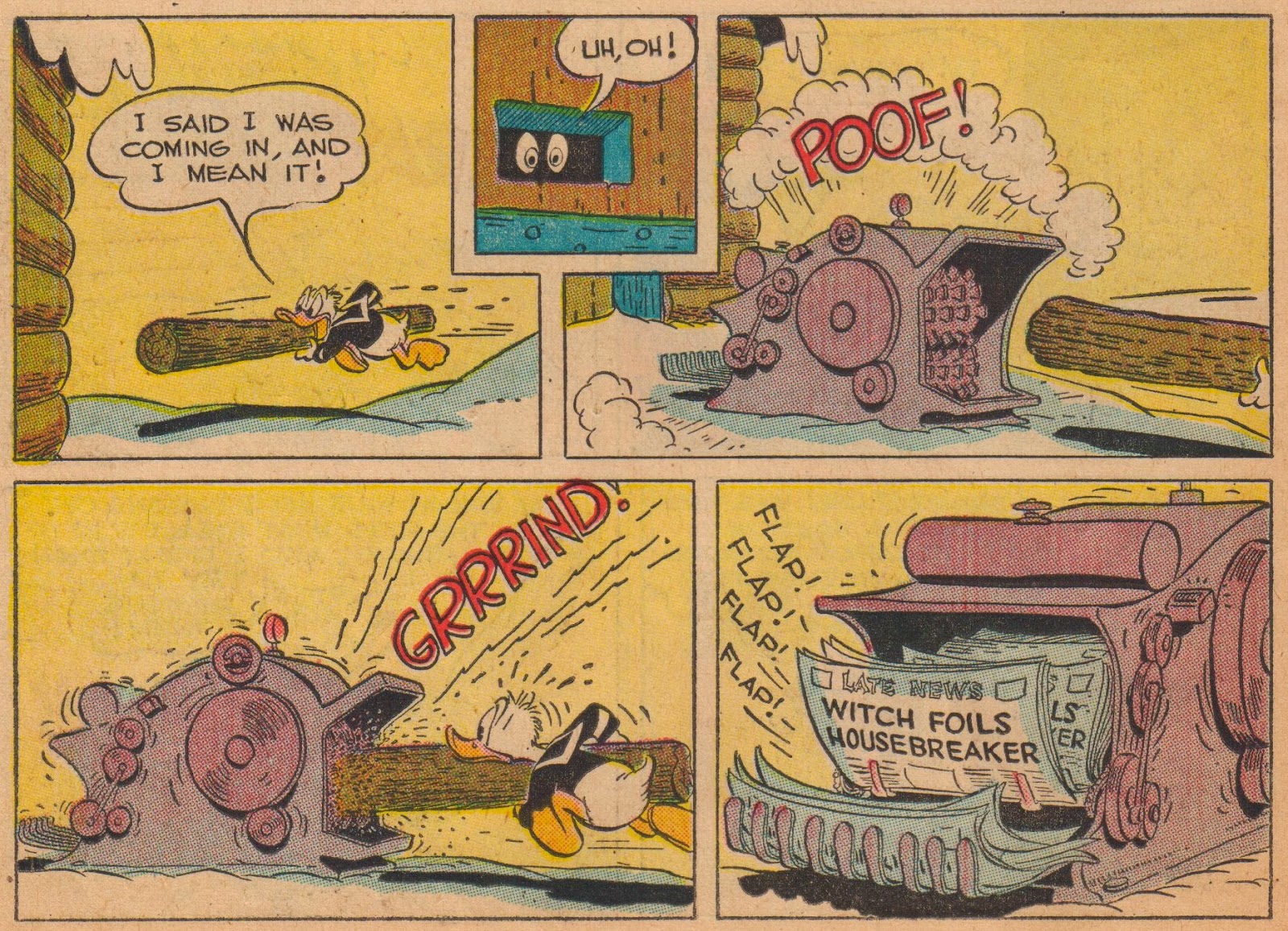 Begium attempts to Dehex the Hex, but Japan defends herself well (Barks, The Golden Christmas Tree, 1948).

The probability that team A will actually accomplish the 3-2 feat, given that there is a 0-2 time point in the first place, may be expressed as

with $G_3(T-s,\lambda)$ the cumulative gamma $(3,\lambda)$ distribution function for the sum of three exponential waiting times, evaluated at match time minus $s$, and $\exp\{-\lambda(T-s)\}$ the probability that team B doesn't score during this remaining time. The $p^*$ is more precisely connected with team A accomplishing 3-2 or even better, as in 4-2 or more – no Norwegian (well, I'm generalising from a smaller sample) will ever forget that after Norway leading 2-0 at halftime, Ullevål Stadion, September 1966, Sweden came back and won 4-2. Just as no Steinkjer fan can put into O'Blivion that they were leading 3-0 over Frigg after twenty minutes in September 1967, but with Frigg fighting back to 3-3. And if North Korea has something resembling an Annals of True North Korean History, they ought proudly to recall that they were leading 3-0 over selveste Portugal at the quarter-finale World Cup of 1966, before Eusébio, the Black Pearl, thought otherwise, but he's digressing. So the probability of the Size of the Curse can also be expressed as

The size of the (well, alleged) curse

Rare events are rare, and there's no evidence that we have seen too surprisingly few 0-2 to 3-2 operations at the World Cups. Data match the Poisson nature of things, from a long string of match results to the Poisson small numbers aspects of the Poisson processes we've learned about in this blog post. Again, trust my words (and my formulae); about 35% of all matches, involving teams which are about equally strong, will see the 0-2 syndrome, and of these again about 2.8% will be blessed (or counter-blessed) by the turning-around operation. Portugal vs. North Korea, Sweden vs. Norway, Frigg vs Steinkjer, Bundesrepublik Deutschland vs. England, Belgium vs. Japan, have been solidly splendid matches, calling on our abilities to be both fascinated and even locally surprised, in time and space. But we're not outside the Poisson world of good statistical control over Small Numbers, and not in the realms of chronosynclastic infundibuli and infinite improbability drives. In 1000 matches between about equally strong opponents, there will be around 350 with a 0-2 moment, and out of these, about 9 will exhibit the turning-around feat.

Above I've taken the Aftenposten Curse Word to Statistical High Court, with the verdict being to throw it out; the Breaking of a Real Curse must be somewhat more impressive and convincing than this. The newspaper needs to go news-hunting for well-defined events with a clear positive probability but which almost never occur (like a Norwegian winning the allround speedskating World Championship, or real estate prices going down for the Oslo area).

When Belgium see Genki Haraguchi and Takashi Inui score, in the 48th and 52nd minute, they ought to be forgiven for being merely moderately interested in the overall $p^*=0.014$, but more concerned with the imminent

Of course Belgium might have been decently satisfied with two-to-two too, which is still hard but with a considerably higher probability, as this would have been sufficient for 2 x 15 minute extra time etc. But they went all the way, impressively. 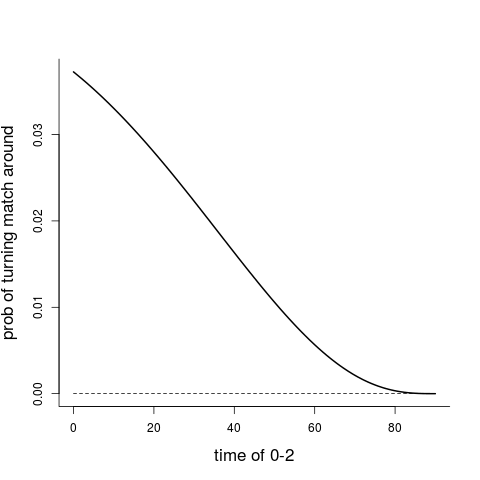 The probabilities I compute above rest of course on certain assumptions, but I do judge these to be well-chosen and realistic, for the questions posed. The formulae do in particular depend on the size of $\lambda T$, used above with the customary $T=90$ minutes and Poisson intensity $1.234$ per team per match (i.e. $\lambda=1.234/90$). For the Russia 2018 tournament we have seen that match-time is rather closer to 94-95 minutes (due to the so-called "injury time"); indeed Belgium's third goal did not appear in the 90th minute, but in the last seconds of the final 95th minute. Also, according to my notes there have been 146 goals in the course of 56 matches, as of the post-quarter-finales moment where I write this blog post. This entails a slightly higher Poisson rate of $1.303$ goals per team per match. Using such very slightly higher values for goal rates yields just a bit higher values of the 0-2 to 3-2 probability, like 1.8% rather than 1.4%; overall conclusions are not changed.

Claeskens, G. and Hjort, N.L. (2008). Model Selection and Model Averaging. Cambridge University Press. [With modelling and focused model selection for football matches as one of the worked-through examples, using a data collection I compiled from 254 matches in European and World Championships, with FIFA ranking numbers for each team a month before match time.]