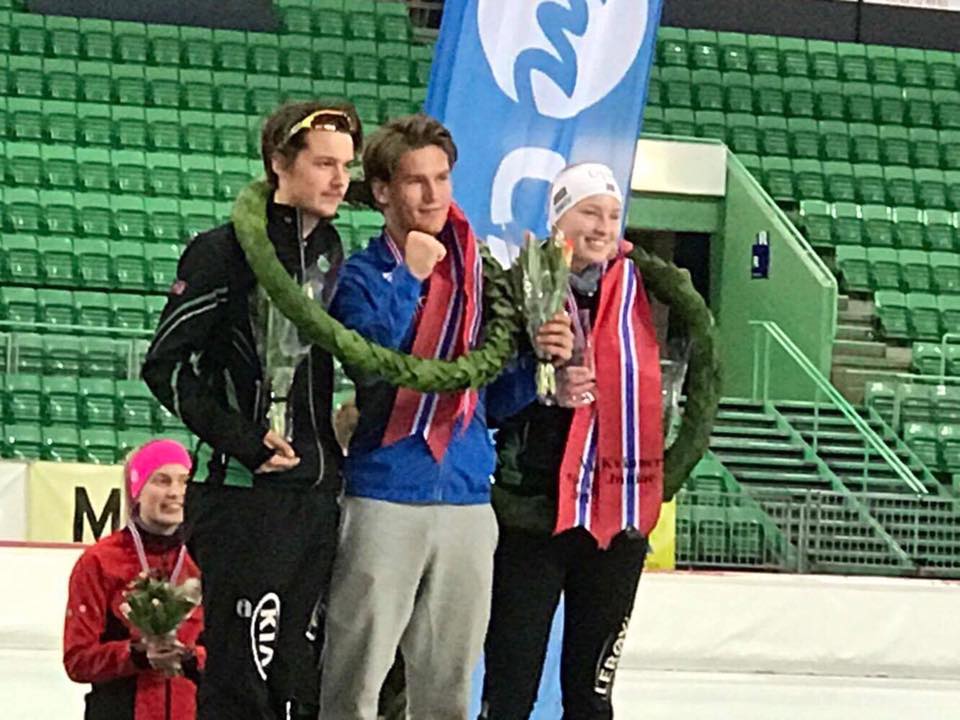 The world of sports is famously able and zealously eager to rank its competitors, even if it takes millimetres and milliseconds and highlevel photography to sort one medal from another. But once in a very rare while even the ministries of sport can't tell the difference. What's the probability that Allan and Odin are exactly equal, to three decimal places in pointsum, after four distances?

The photo above is historic & epic, as it reports on an event which never has happened before, in the World History of Speedskating: The two top skaters, after having skated four separate distances, are equal in pointsum, to three decimal places, and are hence sharing the laurels. Just how wondrously improbable & freakish is this? 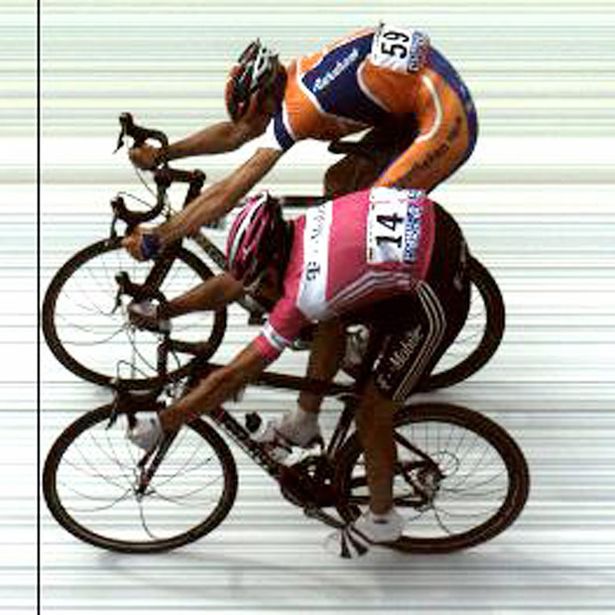 Almost by definition this is if not incredible, then a totally freakish event, as it has never happened before. There have been various close shaves and occasions where only the engineering equipment manages to "see" the difference. At the 2014 Sochi Olympics, both Zbigniew Bródka and Koen Verweij did 1:45.00 in the 1500-m, beating all others. In speedskating, all official times are in hundredths of seconds (i.e. to two decimal places, not three). Most fans, and indeed most human beings, would've been happy to have the Pole and the Dutch share the gold medal. After all, when Thomas Wassberg skied the 15 km cross-country in 41 minutes and 57.63 seconds, at the 1980 Olympics, officials and fans quickly agreed, a posteriori, that it was pretty ridiculous to say that Juha Mieto, who did 41 minutes and 57.64 seconds, only deserved the silver, so the rules were changed -- hundredths of a second don't count anymore, in cross-country skiing. The Internaional Skating Union (ISU), however, is severely and devotedly hunting for subtle differences, even when not noticeable for the human eye. So they went into their computers and found that Bródka did 1:45.006, Verweij merely 1:45.009, thus splitting the horse's hair and saying gold to Poland, silver to the Netherlands.

Luckily (I dare to express), the Hamar time-keeping technicians didn't find any such 0.001-level differences on this occasion, so lo & behold, Allan and Odin were judged to be perfectly equal. So they're forever sharing their gold & their laurels. 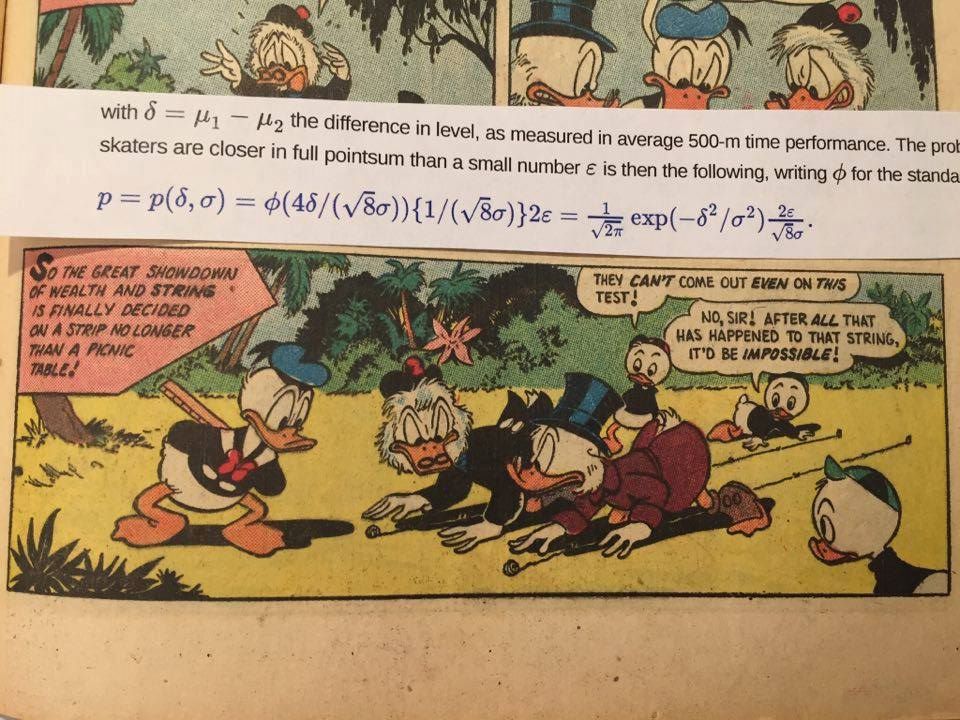 Any decent sport has a catalogue of Close Encounters of the Statistical Kind. In the last pair of the World Sprint Championship in Trondheim, 1984, Gaétan Boucher had to beat Sergey Khlebnikov with exactly 0.48 seconds or more, to become World Champion, and for good measure the Canadian won over the Russian with 0.49 seconds. Even more thrillingly, Marius Bratli in the last pair of the Norwegian Junior Championships 2016 knew he had to skate the 5000-m in precisely 7:21.33 to beat comrade Vetle Stangeland and become the champion -- which is very precisely what he did, to the 0.01 of a dot. You can't ever do this again even if you try very hard. Other freakish-looking incidents take place too. In the Berlin World Cup, January 29, 2017, there were four Chinese taking part in the 500-m Group B. They skated almost exactly at the same speed (and two of them had identical names, adding to the confusion and fascination):

Our own lives carry surprises too, and I suppose you, gentle reader, have stories matching this one, which now comes to my mind: Once upon a time I was travelling in the northern and almost empty part of Sweden, on my way to give lectures on pattern recognition at the Ammarnäs Winter School. We stopped at a boring café with luke-warm coffee in The Middle of Nowhere (and it was minus 27 Celsius). At the neighbouring table was a little boy, dutifully reading his comics magazine, with his grandmother. I heard him say (well, I'm translating from Swedish, for convenience), "Grandma, have you ever heard about Professor Nils Lid Hjort?". She answered "no", incidentally, to my modest disappointment.

Attempts at making probability calculations for such "strange events" are difficult, in particular because the questions are so often raised after the fact, a posteriori. The Law of Very Large Numbers, as investigated and formulated by famous statisticians Persi Diaconis and Fred Mosteller in a JASA 1989 paper, implies that "with a large enough sample, any outrageous thing is apt to happen", with or without a relevant and contextual semi-explanation, so to speak (my pattern recognition trip to Ammarnäs in 2001 took place the only time in history I had a three-page paper published in the Swedish Kalle Anka). So it's clear that some 1-in-a-billion sounding chances might in reality be less freakoutish when properly contextualised and decoded; statisticians and probabilists bring in their "what are we conditioning on?" themes.

with \(\delta=\mu_1-\mu_2\) the difference in level, as measured in average 500-m time performance. The probability that the two skaters are closer in full pointsum than a small number \(\varepsilon\) is then the following, writing \(\phi\) for the standard normal density:

Here we first put in \(\varepsilon=0.005\), since pointsums closer than this means equality, for the 500-1000-500-1000 combination with time results on the 0.01 scale. A decent value for \(\sigma\), meant to reflect the standard deviation level in repeated top races by the same skater, again on the 500-m time scale, is 0.50 (an exercise left to the reader is to estimate this standard deviation based on averaging the empirical variances for Allan and Odin, for the eight races noted above, and the answer is 0.460). If we now further assume that the two skaters are in principle of the very same top level of ability, then the resulting probability is 0.00282, or 2.82 per mille. If Allan and Odin should be willing to do this, over and over again, over the coming 350 weekends or so (it'll take some seven years, and we can watch), we can expect that they are this close, close enough to share the gold medal, in 1 of these 350 competitions.

If the two top skaters we're comparing are not of the mathematically identical level of ability, a different formula ensues, and the probability in question becomes smaller. If we take \(\delta\sim{{\rm N}}(0,\tau^2)\), with \(\tau\) indicating the degree to which the two skaters can be expected to be different, the probability of equal pointsums in the end becomes

For the situation with two top skaters of very nearly but not identical ability levels, this might indicate that the Allan-Odin probability is a bit lower, perhaps 2.30 per mille (reflecting a \(\tau\) of around a quarter of a second), rather than 2.82 per mille.

During the regular and always far-ranging discussions at Forum for Skøytehistorie ("ein av dei mest begeistra, intense og nerdete stader som finnest på nettet", according to Dagbladet) it was mentioned that Allan's and Odin's pointsums were equal even down to the 0.001 level, following computer clock checks of the result times (these are not official). In that case we may put \(\varepsilon=0.001\) above, which leads to the even more impressively slim probability of 0.56 per mille, for the case of two perfectly matched skaters, and 0.43 per mille for the case of not perfectly even skaters, with \(\tau=0.25\) above.

As perhaps illustrated here, statisticians have a certain fascination for interesting rare events -- which adds one more reason for us to hope that Allan and Odin share the 1500 m gold medal in the 2026 Olympics in Stockholm. After all, strange things are bound to happen -- see also out blogposts about the two Lillestrøm women born on the same day who died on the same day, 101 years later, and about conspiracy probability calculus for footballers.

[Photo 1 (from Spk-Falken): Allan Dahl Johansson (left) and Odin By Farstad sharing the laurels; Ragne Wiklund, the Norwegian champion for junior women, to the right. Photo 2 (from Carl Barks's Uncle Scrooge #15, 1956): Scrooge and Flintheart Glomgold fight it out, very evenly, in the African wilderness.]