Friction, Fracture, and the Onset of Geohazards (FricFrac). The Centre for Advanced Study (CAS) at the Norwegian Academy of Science and Letters has selected the FricFrac programme led by Njord's professors François Renard and Anders Malthe-Sørenssen and that involves also Thomas Schuler and Luiza Angheluta, professors in the Departments of Geosciences and Physics at UiO. 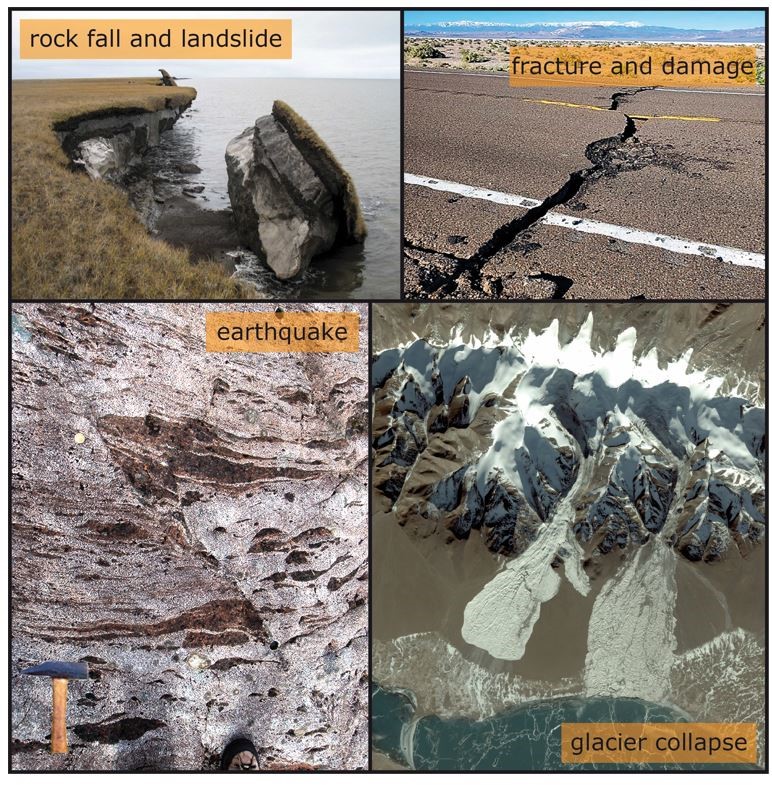 Several geohazards are associated with fracture and frictional processes that lead to the creation of damage and catastrophic deformation events such as glaciers collapse, seismic faulting, rock falls, and landslides.

The main goal is to provide insights into how the evolution of rock and ice interfaces controls the initiation, propagation and arrest of fractures that lead to earthquakes, landslides, and glacier instabilities. Researchers will study the fundamentals of fracture and friction processes, and their effects on the onset of several geohazards. They will perform basic research in collaboration with a cross-disciplinary physics-geoscience-mathematics group of international participants.

Eight professors and two early career researchers will stay for one year at CAS in 2023/24. Norwegian and international guests will give seminars, bring fresh ideas, and provide critical advice on the work conducted. The FricFrac programme will involve two artists, E. K. Mæhlum and K. Bauer, who will visit us regularly and will become inspired by our research to produce their own art. This will enhance our outreach activities and enable the program to broaden its impact on Norwegian and international society.

In 2000-2001, a project at CAS on the Dynamics of Fluid Rock Systems was led by Bjørn Jamtveit, and has been the seed for the Centre of Excellence Physics of Geological Processes (2003-2013). This collaboration resulted in major advances in research on pressure solution, hydrofracturing, hydrothermal vent generation, the origin of ocean islands, and in the coupling between fluid flow and deformation in the Earth’s crust. Several research topics developed during this project are still active in the Njord Centre today, witnessing the long-term effect CAS may have on science.