A new model for the generation of deep earthquakes

Deep intracontinental earthquakes are poorly understood, despite their potential to cause significant destruction. In a recently published article in Nature Communications, a study done in Lofoten by an international project led by Njord's Luca Menegon, has shed new light on the mechanisms through which earthquakes are triggered up to 40km beneath the earth’s surface. With the insight from this study, researchers hope to be able to help at-risk communities in the future from the danger these earthquakes poses. 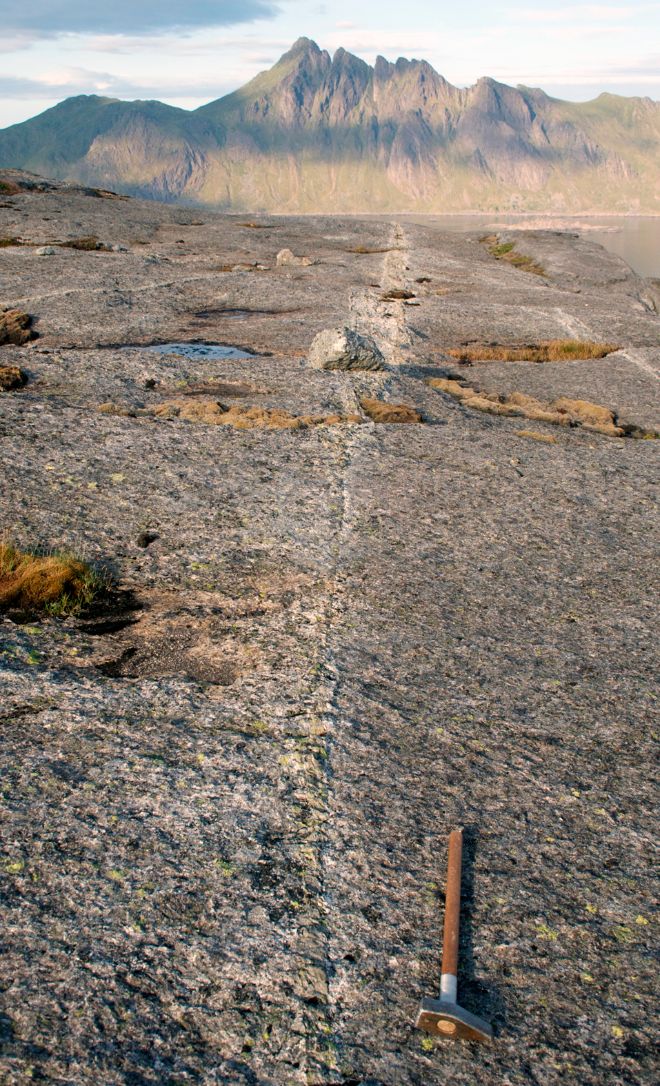 The three light grey lines are three examples of the shear zones described in the paper. Photo: Luca Menegon

While these earthquakes are unusual, because rocks at those depth are expected to creep slowly and aseismically, they account for around 30 per cent of intracontinental seismic activity. Recent examples include a significant proportion of seismicity in the Himalaya as well as aftershocks associated with the 2001 Bhuj earthquake in India. However, very little is presently known about what causes them, in large part due to the fact that any effects are normally hidden deep underground.

Deep earthquakes can be as destructive as those nucleating closer to the Earth’s surface. They often occur in highly populated areas in the interior of the continents, like in Central Asia for example. But while a lot is known about what causes seismic activity in the upper crust, we know far less about those which occur lower. This study gives us a fascinating insight into what is happening deep below the Earth’s surface, and our challenge is now to take this research forward and see if we can use it to make at-risk communities more aware of the dangers posed by such activity.

The scientists conducted geological observations of seismic structures in exhumed lower crustal rocks on the Lofoten Islands in Norway. The region is home to one of the few well-exposed large sections of exhumed continental lower crust in the world, exposed during the opening of the North Atlantic Ocean. Scientists spent several months in the region, conducting a detailed analysis of the exposed rock and in particular pristine pseudotachylytes (solidified melt produced during seismic slip regarded as ‘fossil earthquakes’) which decorate fault sets linking adjacent or intersecting shear zones.

The study, published in Nature Communications and funded by the Natural Environment Research Council in UK, sought to understand how such deep earthquakes may be generated. They showed that earthquake ruptures may be encouraged by the interaction of different shear zones that are creeping slowly and aseismically. This interaction loads the adjacent blocks of stiff rocks in the deep crust, until they cannot sustain the rising stress anymore, and snap - generating earthquakes. Emphasising observations of quite complex networks created by earthquake-generated faults, they suggest that this context is characterised by repeating cycles of deformation, with long-term slow creep on the shear zones punctuated by episodic earthquakes. Although only a transient component of such deformation cycles, the earthquakes release a significant proportion of the accumulated stress across the region.

On one of the field trips for the project, the scientists were accompanied by documentarist Heidi Morstang and here team.