A team from the Physics Laboratory of the ENS of Lyon in collaboration with the Porelab Center of Excellence of the University of Oslo in the framework of Louison Thorens's co-supervised PhD and the CNRS International Research Project (D-FFRACT), were recently able to demonstrate a "magnetic Janssen effect" with the emergence of a radial force along the walls due to the confinement, whose amplitude and direction are determined by the applied magnetic field. The studies have now been published in prestigious Nature Communications. 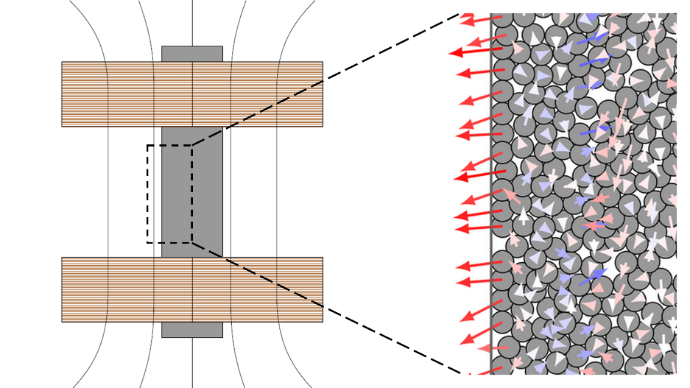 A granular column of ferromagnetic grains, when submitted to a vertical magnetic field (left), result in a radial force along the tube wall (right) creating an additional friction force.

A pile of grain, even at rest, in a silo can exhibit some fascinating properties. One of the most famous is the Janssen effect, named after the German engineer who explained the weight saturation of a column of confined grains. Physicists, in an international research project between France and Norway, have demonstrated the possibility of controlling the mass of a column of steel grains by means of a magnetic field to the point of cancelling it, thus making it undetectable.

After water, grains are the most manipulated state of matter by man. Their handling is of primary importance in many industrial fields, including construction, food processing, pharmaceutical industry, etc. More than a thousand tons of sand and gravel are extracted every second in the world! Therefore, every advance in the understanding of the physics of granular media is of major importance.

In 1895, H. A. Janssen, a German engineer, interested in the failure of grain silos, proposed a model to explain how the friction between the grains and the wall of the container leads to pressure saturation at the bottom of the column.

The team from the Physics Laboratory of the ENS of Lyon in collaboration with the Porelab Center of Excellence of the University of Oslo recently demonstrated a "magnetic Janssen effect". With this it is now possible to control the friction at the walls and thus to modify the apparent mass of the grain column.

Remarkably, for large amplitudes of vertical magnetic field, the apparent mass of the column decreases when adding beads in the silo, until it even cancels! The column becomes undetectable with a zero apparent mass!