Njord is proud to announce that a new PoreLab/Njord project has been funded by the NFR Researcher Project for Young Talents! The project is called FlowConn and will study the connectivity enhancement due to thin liquid films in porous media flows. 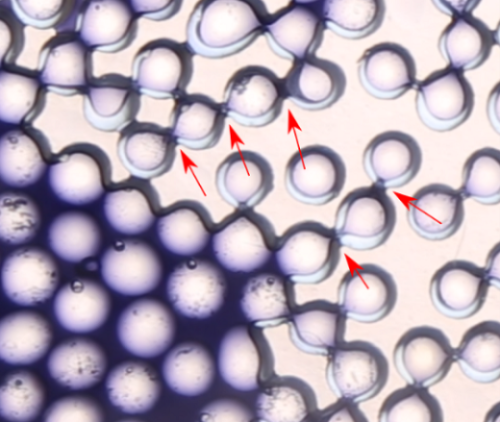 Thin liquid films and capillary bridges (as those marked by the red arrows in the figure) can create new pathways for the transport of fluids in a porous medium, effectively enhancing the overall fluid connectivity of a sample. In the FlowConn project we will study the basic physical mechanisms responsible for the transport of fluids through such films. We will analyze this problem experimentally, analytically and via numerical simulations.

The flow of liquids and gases inside porous networks is a rather common process. It happens for example when rain falls on soil: as the water moves in, it displaces air from the pores between the soil grains. In many of those fluid displacement processes, thin layers of liquid are left on the surface of the grains forming the porous network (for example, seemingly dry soils frequently have thin layers of water covering their grains). Those thin layers play a significant role: they can connect distant parts of the system.

“If you look at a raindrop rolling down a car’s windshield you will see that it frequently leaves behind a thin water trail. As the drop moves down the glass, the area just behind it does not get immediately dry: a thin water film persists, sometimes even for a long time after the drop passes by. If the glass surface were not so smooth, such films would remain for much longer, and this is precisely what happens inside porous media like natural soils and rocks. When a wet portion of the soil gets dry, say after some hours of sunshine following a storm, thin liquid films remain on the surface of the soil grains. Those liquid films can interconnect different parts of the soil, like a whole set of water bridges forming a large network of water streets and avenues. Plant roots can use this network to obtain nutrients from far away, but pollutants can also take a high-speed road to spread quickly in the soil.

In this project, we will study the network of interconnected liquid films inside a porous medium. Unlike the windshield, natural soils are not transparent, so we will work with a custom-built porous medium made of glass. We will study the formation and stability of the liquid film’s network and how to design the system to obtain the most efficient transportation network. Our experiments will be backed up by computer simulations and theoretical modeling based on network theory, the same branch of mathematics used to describe the traffic of cars in a city. This project will give us a better understanding of how liquids are transported inside natural soils and how this knowledge can be used to mitigate the effects of pollution spreading.”