Northern lights for all to see

The photos of the dancing aurora borealis were captured this week at Sognsvann by Aditi Bhatnagar. Aditi is a Doctoral Research Fellow at RoCS - Rosseland Centre for Solar Physics. 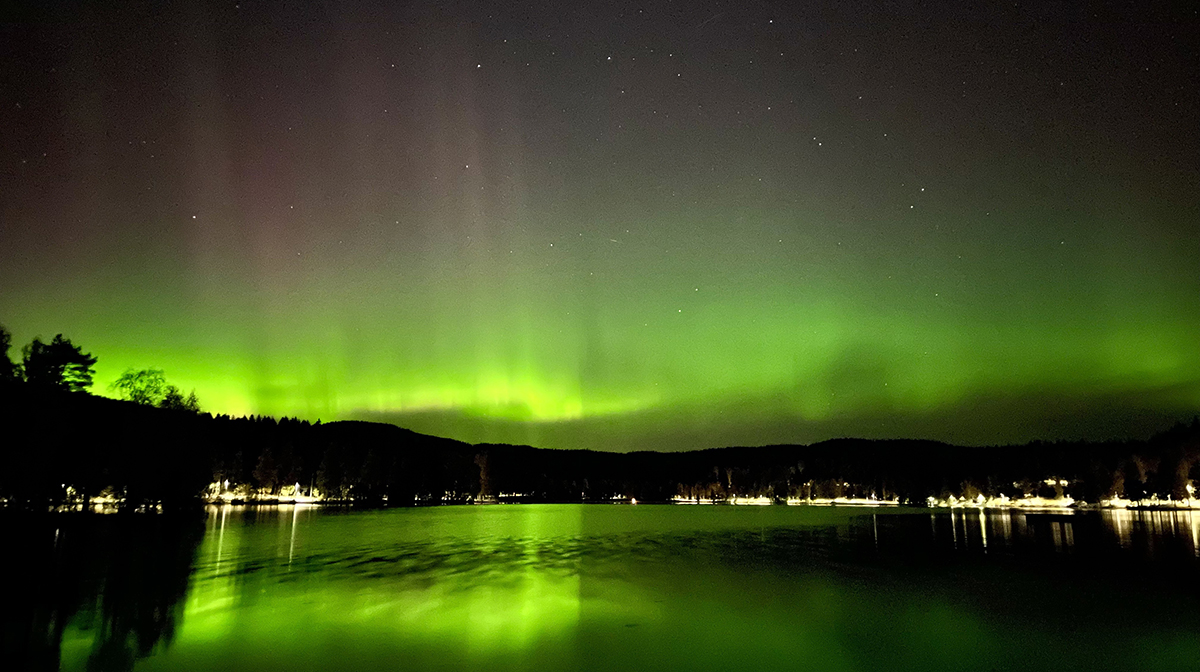 Norway is well known as a 'Northern Lights' destination. It is geographically possible to see the northern lights also in Oslo under the right sky conditions. Photo: Aditi Bhatnagar.

The period of strong activity was on Monday 3rd of October from 21:50 to 22:20. Auroras occur when electrically charged particles from the sun collide with gases in earth's atmosphere.

- Aditi, how did you know when to go out to capture the Northern lights?

- From 27th September a coronal hole had been facing the earth (visible on Solarmonitor). I therefore kept monitoring the space weather activity from 29th September. I follow SpaceWeatherLive, where it is possible to see the real-time data from DSCOVR satellite in space. They provide the data for various solar wind parameters - speed, density, and magnetic field. This way you can get to know what the conditions for the next 40-60 minutes will be like. Based on how the data evolves, like increasing speed or magnetic field, Bz staying negative consistently for a long time etc, I decide whether to go to look for Auroras.

Aditi made a video of the dancing Auroras:

On Tuesday I left for Sognsvann at 20:30 as I inferred from the future data that the activity could possibly increase and reached there by 21:00. It wasn’t possible to see the Auroras by eye then, but the activity started increasing and a faint green cloud started hovering over the horizon. As time passed, since the magnetic field orientation stayed negative for a long duration, the faint green cloud became brighter and bigger. By 21:50 it was possible to see the Auroras dancing. By 22:10 they became quite strong and it was possible to see the pink streaks of Auroras moving around and towards us. That was really beautiful. Around then I got a notification that it has reached the level of a Geomagnetic storm too. The Kp index was 5. So it was good that I went there and waited for the Auroras to appear!

- Was it the first time this autumn you have seen Northern lights?

- This isn’t actually the first time I have seen Auroras this autumn. From August, as Oslo started to have darker nights it was possible to see the Northern Lights when there was some coronal mass ejection or coronal hole on the Sun. As the Sun’s activity is increasing, these instances of seeing Auroras from Oslo will also increase, weather permitting.