Nobody has done this before

See the new close up photos of the Sun from Solar Orbiter. The images shows the progress of the ESA/NASA spacecraft as it heads inwards on its voyage of discovery. 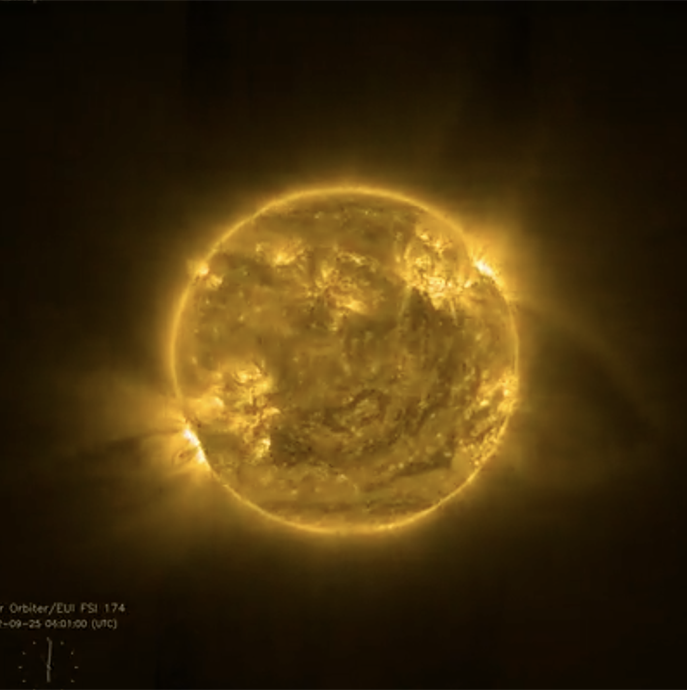 Solar Orbiter arrived at its close approach to the Sun on 12 October 2022 at 21:12 CEST. The sequence was taken by the Extreme Ultraviolet Imager (EUI) using the Full Sun Imager (FSI) telescope, and shows the Sun at a wavelength of 17 nanometers.

This wavelength is emitted by gas in the Sun’s atmosphere with a temperature of around one million degrees. The colour on this image has been artificially added because the original wavelength detected by the instrument is invisible to the human eye.

Working for our safety

So much of modern society relies on spacecraft in orbit around Earth to provide essential communications and navigation. Understanding more about the Sun and the ‘space weather’ it generates will help companies operate their satellites around Earth safely and securely.

Video: Towards the end of the sequence, the image appears to jump slightly. This happens on the days that EUI was not returning data to Earth. The coloured bar at the top of the image shows the impressive amount of data collected in this period, together with these brief gaps in the data coverage.

Depending on where Solar Orbiter is along its orbit, it can take days or weeks for the data it records to be transmitted back to Earth. Data from the current perihelion passage is downlinked within a couple of weeks of it being collected.

RoCS on a mission with ESA and NASA

Solar Orbiter is the most complex scientific laboratory ever to have been sent to the Sun. It was launched 10th of February 2020 from Cape Canaveral in America.

RoCS - Rosseland Centre for Solar Physics has been a part of the mission from the start and their scientists and engineers play key roles on one of the remote sensing instruments: SPICE (Spectral Imaging of the Coronal Environment).