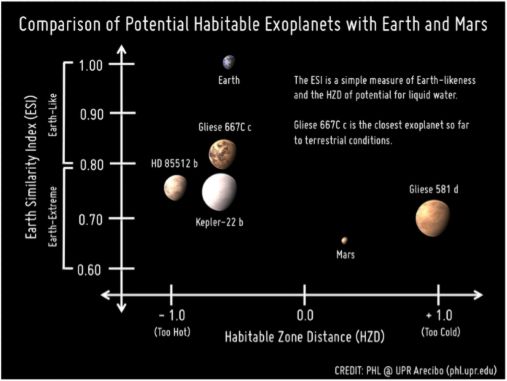 Figure 1. Click here for a larger version. Comparison of the planets that are currently the promising candidates for potentially habitable worlds.  The Earth Similarity Index (ESI) describes how similar an object is to Earth and ranges from zero (no similarity) to one (identical to Earth). The surface temperature, which is the most important factor in the ESI, depends much on the distance to the host star. The zone around a star, where the surface temperature allows for the existence of liquid water on the planetary surface, is called habitable zone.  Gliese 667Cc is located in the habitable zone of its host star and is currently the most Earth-like planet known (ESI=0.82). Credit: Planetary Habitability Laboratory @UPR Arecibo.

The discovery was announced already in last November and recently confirmed (see references below). The planet GJ667Cc is even more similar to our Earth than Kepler-22b, which was confirmed as a potentially habitable planet just a few weeks ago. GJ667Cc, the new prime candidate for a habitable world, is only 22 lightyears (or 200 million million kilometres) away, which is in our direct cosmological neighbourhood.

Less than 20 years ago before the discovery of the first exoplanets, we could only speculate about the possible existence of such planets. By now, more than 700 exoplanets are known, while over 2000 candidates wait for confirmation – among them many in the so-called habitable zone around their host stars (see Figure 1). The increasing number of known potentially habitable planets suggests that such planets might be frequent in the universe.

While Kepler-22b is orbiting a sun-like star, GJ667Cc is accompanying a red dwarf star of spectral type M. Stars of this type, also called “M-dwarfs”, are smaller and cooler than our Sun but make up at least 60% of all stars. M-dwarfs are currently investigated here at the Institute of Theoretical Astrophysics. Most stars that host exoplanets are thus expected to be cool M-dwarfs, which makes the case of GJ667Cc particularly interesting. 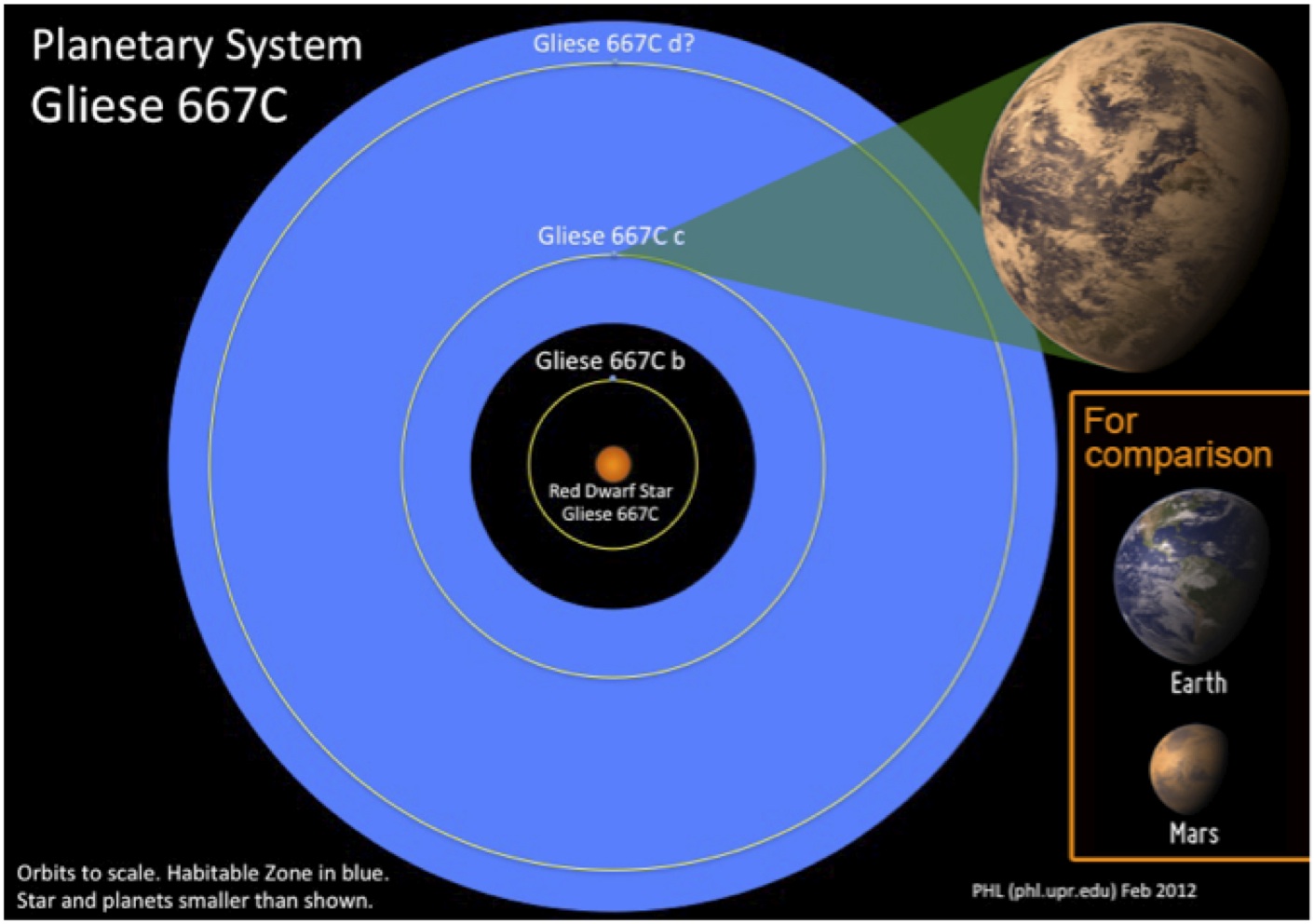 Figure 2: See here for a larger version. The planetary system around the red dwarf star Gliese 667C consists of up to three currently known exoplanets of super-Earth type. The planet c is located right in the habitable zone, where liquid water on the planetary surface may exist. For comparison of sizes, the Earth and Mars are shown next to an artist impression of the planet 667Cc.
Credit: Composite figure based on images from the Planetary Habitability Laboratory @UPR Arecibo.

With an effective temperature of 3400 °C on its surface, the host star GJ667C is much cooler than our Sun, which has a surface temperature of 5500 °C. This red dwarf star therefore emits  much less radiation than the Sun, reaching a luminosity of only just over one percent of the solar value.

Not too hot and not too cold

GJ667Cc receives a radiation flux which is about 90% of what we receive from our Sun on Earth. Although most of this radiation is emitted in the infrared (IR), it is most likely enough to allow for liquid water on the planetary surface. The exact surface temperature is nevertheless uncertain and depends on a number of yet unknown factors. The temperature could be a pleasant 30°C if we assume a planetary atmosphere that is similar to the Earth’s. A more massive atmosphere, however, would result in higher temperatures and Venus-like conditions, which are unfavorable for life. Further observations are needed to answer if GJ 667Cc truly supports liquid water and if the conditions on this planet are appropriate for hosting life.

Close to the star

Due to the short distance to its central star, GJ667Cc orbits this star in only 28 days. One year on this planet is thus only 28 Earth days long. This would make it possible to celebrate your 1000th birthday (which is just 77 years on Earth). The days, however, could be very long. As the planet is so close to its central star, it is very likely that the planet is tidally locked. It would rotate synchronously and show always the same side towards the star – an effect that we know from our Moon. Consequently, there could be eternal day on the hemisphere towards the close-by star and eternal night on the other side, which is facing outer space. The temperature differences between both sides could be large and could affect the global climate. 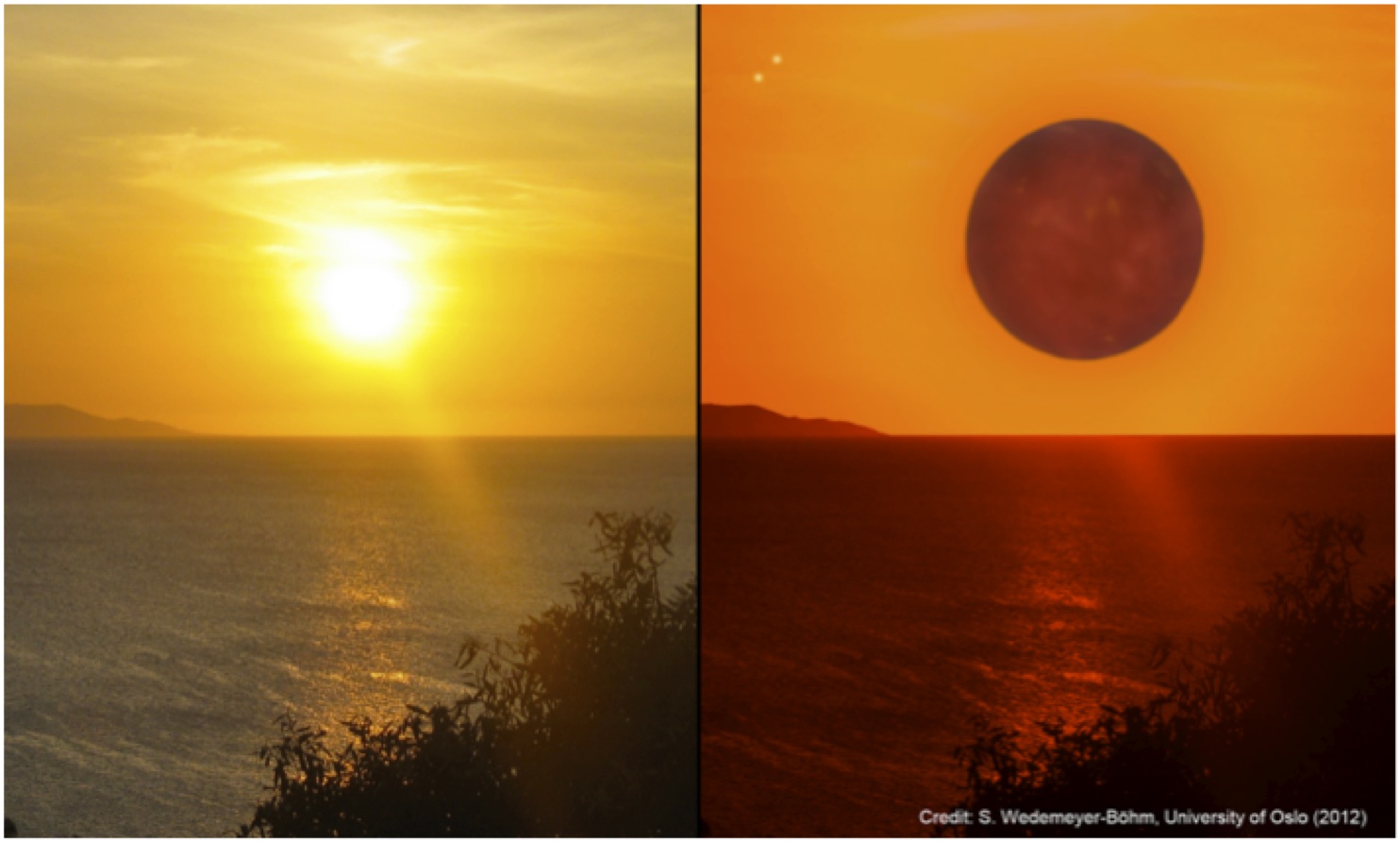 Figure 3: The Sun seen from Earth (left) and an impression of how the red host star could look from the surface of the planet Gliese 667Cc (right). Although the star is much smaller than the Sun, it would appear larger on the sky and cast a faint reddish light on the planet’s surface. The two other stars Gliese 667A and B would be visible on the sky, see upper left corner on the picture to the right.
Credit: S. Wedemeyer, University of Oslo (2012)

The short distance lets the star appear much larger on the sky of GJ667Cc than the Sun on our sky. The red dwarf would be seen as a red disk that, in comparison to the Sun, is about 3 times as wide and covers about 10 times the area (see Figure 3). The star casts a faint reddish light on the planet’s surface. Furthermore, GJ667 is part of a triple star system. The distance to other two stars Gliese 667A and B is about 230 AU, which is about six times the distance between Pluto and the Sun and clearly outside the planetary system around Gliese 667C. Nevertheless, these two stars would be prominently visible on the sky. Our Sun would also be seen with the naked eye as a distant star.

Unfortunately, there is a potential problem with the nearby host star. Many M-dwarf stars – among them GJ667C – are known to emit flares, which are intense bursts of radiation and energetic particles. Flares on the Sun are known to have a direct impact on our Earth and can, for instance, cause problems with satellite and radio communication. Flares on M-dwarfs, however, can be a thousand times stronger than compared to our Sun. Such mega-flares can double the brightness of the star in minutes. Life on the surface of GJ667Cc would have to find a solution for this problem, especially since the planet is close to its flaring host star.

Another problem is connected to the presumably strong magnetism of the star. Many red dwarfs may be often covered by starspots (the analogues of sunspots) that could reduce the energy output of the star by as much as 40% for periods that may last months. Together with the fact that the red dwarf star emits almost no ultraviolet light, these varying light conditions could be a potential problem for the formation of life as we know it.

Living on GJ667Cc – a heavy experience

Being on GJ667Cc would certainly be a quite different experience. The mass of the planet GJ667Cc is estimated to be (at least) 4.5 times that of the Earth. Like Kepler-22b, GJ667Cc is a Super-Earth, i.e. a planet that is slightly larger and heavier than our Earth. The size and density are not known yet which leaves the possibility that GJ667Cc after all could be an inhabitable gas planet. Only a more compact rocky or ocean planet with a corresponding radius between about 1.7 and 2.2 Earth radii would be favorable for the formation of life.

The higher mass of this planet results in a different gravitational acceleration (that’s what keeps us on the ground) compared to our Earth. In the case that GJ667Cc is a rocky planet, the gravitational acceleration on the surface would be up to 60% higher than what we experience on the surface of Earth.  In other words, you would feel (up to) 1.6 times heavier (1.6 g). A person with a weight of 75 kg on Earth would thus weigh 120 kg on the Super-Earth.

Furthermore, a heavier planet can keep a more massive atmosphere. Consequently, the atmospheric pressure at the planetary surface is likely to be higher. If GJ667Cc has an atmosphere that scales proportional to the terrestrial one, then the pressure would just be a few times higher. For a more extreme case like a Venus-type atmosphere, the pressure could be several hundred times larger, which corresponds to a water pressure a few kilometres deep down in the ocean on Earth. 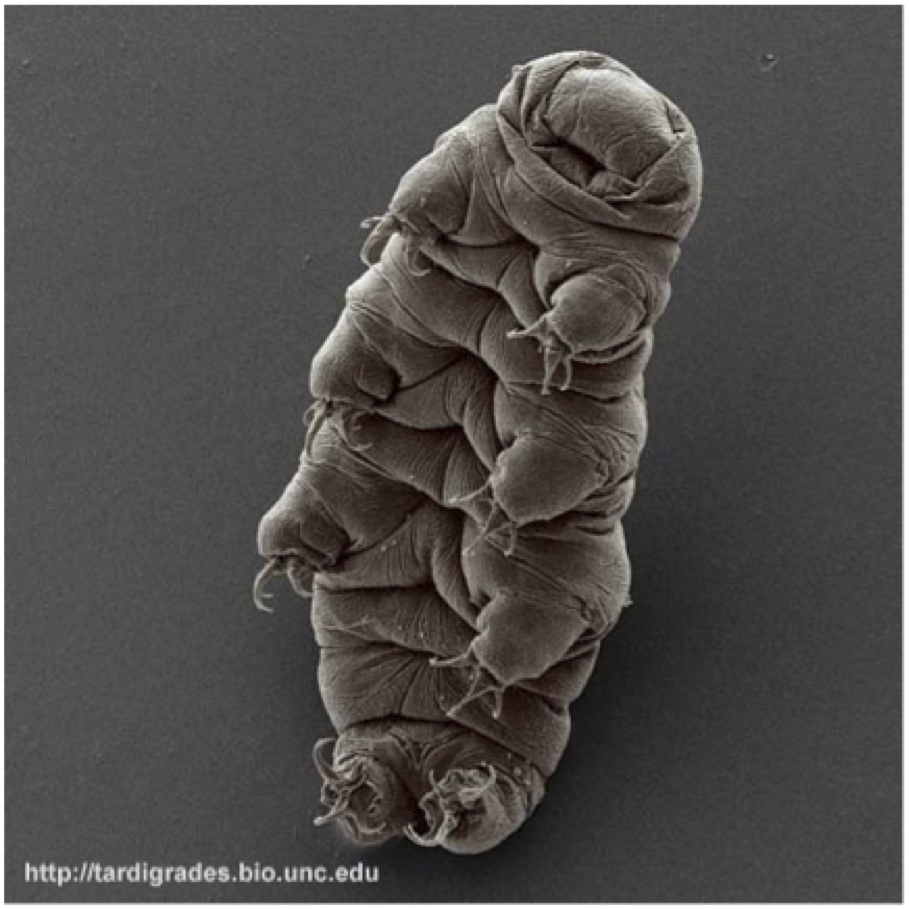 Figure 4: Tardigrades or “waterbears” are examples for animals that can exist and develop under extreme conditions here on the Earth. They tolerate extreme temperatures and high radiation doses.
Credit: http://tardigrades.bio.unc.edu

Could there be life?

Although GJ667Cc is located in a habitable zone, the conditions on the planet could be very different from our Earth. Life would be facing some potential challenges, which may include low and varying light conditions, possibly a higher atmospheric pressure, and violent flares. Nature proves to be inventive though. Even on our own planet we find species that show an amazing ability to adapt to extreme conditions. Examples are the so-called tardigrades, which are also known under the charming names “waterbears” and “moss piglets” (see Figure 4). These tiny creatures range in size from just 0.1 mm up to 1.5 mm. They are found in hot springs, ocean sediments, under ice sheets and even on top of the Himalayas. Waterbears tolerate extreme temperatures from just above absolute zero (-273 °C) to about +150 °C. They can survive years without water and a 1000 times more radiation than other animals. These hardened creatures have even been returned alive from studies in low earth orbit where they were exposed to space conditions. Even if the conditions on GJ667Cc might not be favourable for most terrestrial life forms, it certainly leaves room for the imagination. We can only speculate how fauna and flora – if present at all – would evolve under such different conditions.

Exoplanet app for your iPhone

A planetary system around the nearby M dwarf GJ 667C with at least one super-Earth in its habitable zone, to appear in Astrophysical Journal Letters.

The HARPS search for southern extra-solar planets XXXV. Super-Earths around the M-dwarf neighbors Gl433 and Gl667C, submitted to Astronomy & Astrophysics