Fredagskollokvium: Massive outflows of cold gas and their role in the baryon cycle of galaxies

Past research has shown that the energy released by accreting super massive black holes (SMBHs) and by intense star formation activity can undermine even the coldest and densest phase of the interstellar medium (ISM), namely the cold molecular gas, which represents the main fuel for star formation. Massive molecular outflows, with velocities approaching 1000 km/s, outflow mass-loss rates of 100s of MSun/yr and sizes of  several kiloparsecs, have been observed in the host galaxies of powerful starbursts and quasars from redshift, z~0 up to z>6. Explaining the presence of such large masses of cold gas in outflow and understanding their driving mechanisms is the goal of extensive ongoing theoretical and observational efforts, which I will review in this talk.

I will also discuss a new scenario for the interpretation of these outflows in the context of galaxy formation and evolution models. Molecular outflows were initially considered a viable mechanism to provide quenching through ejection. However, observations are now showing that a cumulative effect of these outflows is the transportation of metal-enriched cold material to circumgalactic medium (CGM) scales, where most of the cold gas stalls without escaping the halo. As a results, molecular outflows may be the main players of the baryon cycle in and out of galaxies, by temporarily storing in the CGM the fuel for future star formation, which will be eventually re-accreted to the host galaxy. Therefore, molecular outflows may have a two-fold role in galaxy evolution: immediate quenching of star formation in the central kiloparsecs, and long-term feeding of the galaxy by injecting (cold) gas in the CGM. 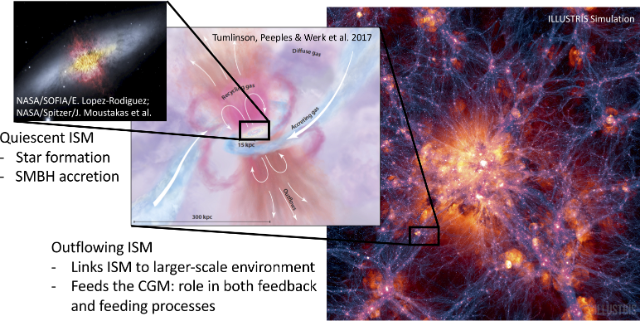