From astronomy to a job in the health tech industry

Bhavna Rathore uses her background from programming in astrophysics to working with ultrasound scanning devices as a system engineer. 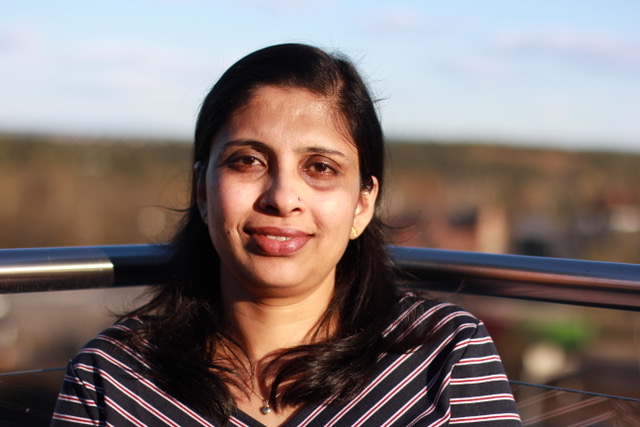 Bhavna Rathore at her terrace on a summer day. Photo: Private

The medical technology is used for diagnostics, treatment, monitoring and storage of information.The company, GE Vingmed Ultrasound, is market leader in cardiovascular and handheld ultrasound devices.Their vision is "to make Norway the world's best arena for health innovation". Bhavna enjoys her work in their Primary care unit.

– My current job is completely different from my academic career. I am working with the core R&D team working on creating new ultrasound scanning products.

I am working with the real hardware, ultrasound scanning devices. This is completely different compared to theoretical research work. However, I am still using my knowledge of computational programming

Bhavna's career started when she moved to Norway in 2009 for for a doctoral research position in Solar Physics at the Institute of Theoretical Astrophysics (ITA), University of Oslo.

After her doctoral degree in 2015, Bhavna´s first job in Norway was in a startup company.

Bhavna did her masters in India in 2005 during which she worked on research projects on laser and plasma physics at DAVV university in Indore. Her master’s degree is in applied physics. Her main area of study was Physics/Astrophysics and numerical data analysis based on different problems in Physics.

– I wanted to pursue a PhD in the similar field of physics and that is why I ended up at the Institute of Theoretical Astrophysics at the University of Oslo. In Norway, she got an opportunity for a doctoral fellow project in Astrophysics.

During my research, I learned different skills related to computer programming, understanding algorithms and numeral analysis which I use every day

in my current and also previous workplaces, explains Bhavna.

After completion of my PhD thesis, I worked as a researcher at ITA, UiO for some time, she adds.

Her PhD is in Solar physics and her Ph.D. project was on the numerical statistical analysis and modeling for the solar atmospheric data for NASA’s satellite IRIS. Her thesis was titled “The Formation of the CII 133.5 nm Multiplet and the Diagnostics of the Dynamic Solar Chromosphere”.