At the Sustainable Development Goal conference in Bergen yesterday, a CBA-led UNESCO report was launched, on the role of higher education institutions in reaching global sustainability. 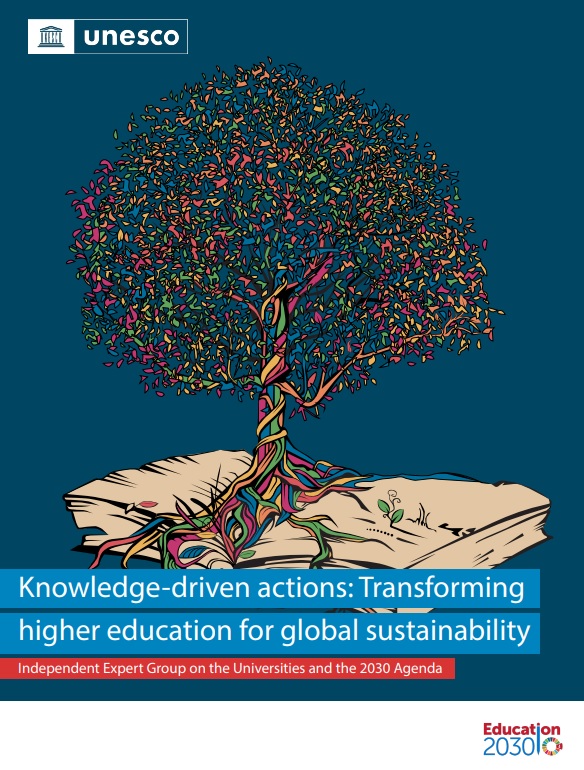 In 2020, an independent expert group was appointed by UNESCO in partnership with the University of Bergen (UiB), supported by the International Science Council (ISC) and the International Association of Universities (IAU). The mandate of this group of internationally renowned experts was to reflect on and communicate the transformations needed in Higher Education Institutions (HEIs), in order to effectively commit and contribute to the 2030 Agenda and the Sustainable Development Goals (SDGs). Yesterday, their report was officially launched at the SDG conference in Bergen, where also CBA scientific advisory board member Tim Lenton gave a key note lecture.

The independent expert group has been composed of fourteen members from around the globe that have been dedicated to studying and transforming research and education in general and higher education in particular throughout their careers.  They represent the five regions of the world.  It was co-chaired by Dag Olav Hessen from CBA, University of Oslo (UiO), and Sylvia Schmelkes, from the Universidad Iberoamericana in Mexico. During several meetings during 2021, the group finalized its report which is now available: Knowledge Driven Actions: Transforming Higher Education for Global Sustainability.

This report constitutes a call for universities and HEIs to use the knowledge they produce and the education of new professionals they carry out, to help solve some of the world´s greatest problems, as covered in the SDGs. Humanity is facing unprecedented challenges, most strikingly so in relation to climate change and loss of nature and biodiversity, as well as to inequality, health, economy, and a full suite of aspects related to the 2030 Agenda. Given this new reality where the human future, along with other species, is at stake, it is time for HEIs to systematically rethink their role in society and their key missions, and how they can serve as catalysts for a demanded fast transition towards sustainability. The complexity implies that solutions should be part of a radical agenda that calls for new alliances and new incentives.

It is also time for the HEIs to make ‘sustainability and SDG literacy’ as a core requisite of all faculty members and students.  Sustainability education benefits from the exposure of students to real-world problems and immersive experiences.  Appreciating the greater good, and contributing to values more than mere monetary benefits will further enthuse or inspire students as well as the faculty mentors.  Ultimately the education culture at the universities and other HEIs needs to change so that it encourages students to learn via experimentation and critical thinking from multiple perspectives.

This report is about the SDGs, but it is important to realize that these will expire in 2030. We thus strongly recommend that HEIs, while being a part of that agenda, also should look forward – not only as instruments to implement SDGs, but also to be intensively involved in crafting what the goals are in the first place. A really long-term perspective both for HEI activities and politics needs to be implemented.

The call this report makes is for universities and HEIs to become an active part of an agenda that has merited the consensus of 193 countries and that aims at the solution of some of the world’s more pressing problems, stated in the seventeen SDGs.

The report focus on three main areas of transformation of HEIs that we touch upon:

It implies directly intervening in experimental projects that test solutions with the participation of students.

We see this report as highly relevant not only to CBA, but also the handling of the SDGs at UiO as well as in an international context, and it has provided a good opportunity to promote natural science issues in a wider context.

The report can be read here (link to the web page of the project).