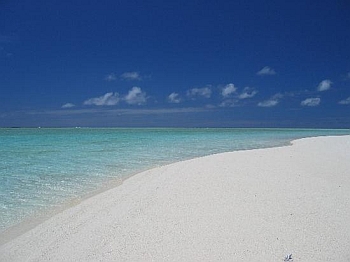 The paper has generated an unprecedented volume of media attention worldwide and our tale of a lost continent received 1.4 million hits on the BBC news website on February 25, the second most read story and only beaten by the Oscars story.

Sampling beach sand eliminates the need for rock crushing and thus the chance for contaminating the sample. By using beach sand we let nature do the job because erosion has processed tons of material, and concentrating the few zircon grains in the residual sand. Hans Amundsen and Ebbe Hartz therefore had to return to Mauritius to sample beach sand.

Fernando Corfu then used the U–Pb method to date the zircon xenocrysts found in the sand. The zircons ages, either Palaeoproterozoic (> 1971 million years old) or Neoproterozoic (660-840 million years old) were astonishing, and we proposed that the zircons must have been assimilated from ancient fragments of continental crust beneath Mauritius, and brought to the surface by plume-related lavas in recent times.

In order to identify other regions in the NW Indian Ocean that could be underlain by continental crust, we drafted Nick Kusznir to calculate crustal thicknesses by gravity anomaly inversion, and we demonstrated that Mauritius, parts of the adjacent Mascarene Plateau, and parts of the conjugate Indian margin (e.g. Chagos) may overlie a Precambrian microcontinent (Mauritia).

Based on reinterpretation of marine geophysical data by Carmen Gaina, we proposed that Mauritia was separated from Madagascar and fragmented by a series of mid-ocean ridge jumps. It is still puzzling that absolute plate motions (calculated by Pavel Doubrovine and Bernhard Steinberger) were such that, subsequent to fragmentation, the Réunion hotspot trail followed continental fragments along parts of Mascarene Plateau. But it is likely that a combination of lithospheric heterogeneities, continental fragments and plume-ridge interactions had a subsidiary control on the distribution of surface volcanics.

Our tale of a lost continent in the Indian Ocean took 14 years to be published from the first sampling trip to Mauritius. The paper was rejected twice in Nature, the second time (in 2012) because the reviewers did not consider our story novel and sensational enough for Nature. It was ignored in Science (not sent for review), but finally published in Nature geoscience, and interestingly became the top news stories in both Science and Nature.

Tags: CEED, Lost continent, Nature Geoscience, Paper of the month, Trond Torsvik By Henrik Svensen
E-mail this page
Siste innlegg More ...
UiO > The Faculty of Mathematics and Natural Sciences >
The Centre for Earth Evolution and Dynamics > About the centre >