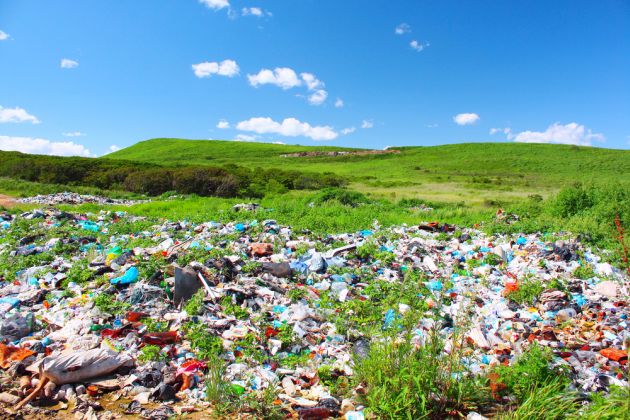 People, for the most part of their lives, go about their daily routines without too much thought for the waste that is created by everyday activities such as purchasing and transporting food and other goods, or what happens when possessions such as clothing or belongings are worn out, or when building work occurs and waste is generated. The UK produces about 220 million tons of controlled wastes per year and nearly half of it ends up in landfill.

With EU regulation in place, active landfill sites are lined and capped to contain any products of degradation, such as gas and liquids. Landfill sites are often located in disused quarries.

The smell is distinctive - a kind of sweet but rotten, overpowering stench that clings to you even after you leave a site. The first thing you’ll see before you even see the gaping hole full of multi-coloured trash is usually a swarm of seagulls which can total thousands, circling high above the mounds of trash. On getting closer to the site the sound of heavy machinery and warning beacons overloads senses and adds to the smell. It is a place you would prefer to forget about.

However, given the legacy of landfill spanning generations, these sites cannot be forgotten. Land fill sites release large amounts of methane and carbon dioxide as waste decomposes, and these are strong greenhouse gases. The problem is that nobody really knows with high certainty how much of these gases historic landfill sites produce.

Between 4-7 August, I participated in possibly the largest collaborative greenhouse gas measurement campaign at a landfill site in Great Blakenham near Ipswich, UK. The aim of the project was to test and inter-compare various existing methods in academic and regulatory use for determining emissions of methane and carbon dioxide from diffuse local area “hotspot” sources (such as landfill). The UK site offered a natural laboratory for this work, not simply because it is a landfill site, but because it is a known hotspot source, so it can be used to test flux methods that would be transferrable to other hotspot sites of interest to academia and Government, including biogenic sources such as wetland.

We tested various flux techniques over the 2 week deployment both independently and jointly to evaluate the efficacy of the methods.

The overall aim of the project was to diagnose which flux methods are useful and which are not for both snapshot and longer term studies of emissions at the local scale by intercomparing results and examining sensitivity and sources of bias. Thus the absolute fluxes calculated for the 2-week period, while interesting to academia and beyond in themselves, are not the driving scientific goal of this specific project.

My specific interest was to assist with field validation of the Cambridge small NDIR sensors. These sensors have an infrared light source and detector; sample air is drawn into a multi-pass White cell and absorption is measured and related to the quantity of the absorbing gas (CO2 and CH4) present.

The technology is lightweight, inexpensive and has high potential for providing relatively high quality (precision) measurements and incredibly low cost. The ultimate ambition is to develop a sensor payload that could be flown by UAS, radiosonde balloons, or deployed in large surface sensor networks.

The conclusions of the study will be used to advance academic understanding and methods, and to define future monitoring strategies by regulators. These measurements will be used to improve understanding of the spatial distribution and source characteristics of methane and carbon dioxide.  We hope that the next field deployment will be at a mud volcano in Indonesia (http://folk.uio.no/adrianom/LUSI%20LAB.html).">LUSI) to measure the amount of carbon dioxide and methane released.