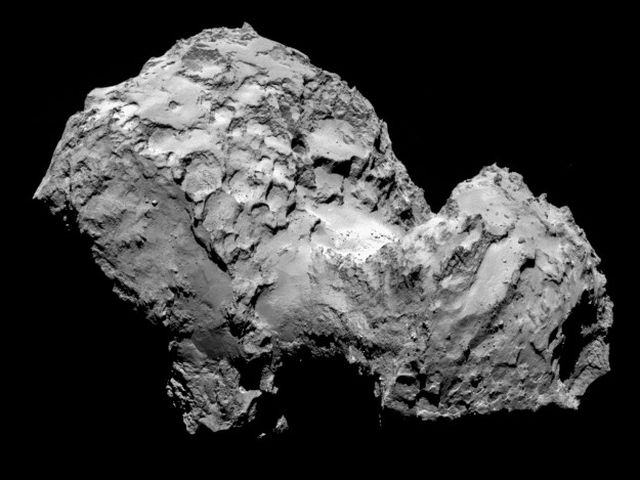 Space missions have long planning times. As young students we heard a lot about preparation of the mission and the characterization of what a comet is. We were mildly impressed that there can be hours-long debates whether a comet is an icy dirt-ball or rather a dirty ice-ball. However, the launch was postponed and the new target became 67P/Churyumov-Gerasimenko, as comets are named after their discoverers. Finally, the launch of the Rosetta mission in March 2004.

For the next ten years Rosetta was circling through the solar system and to gain enough velocity the space craft was accelerated by close fly-bys of Mars (one time) and Earth (three times). This gravitationally assisted modifications of the orbit allowed reaching deeper and deeper into space, traversing the main asteroid belt between Mars and Jupiter twice, and taking photos of the asteroid Steins in 2008 and asteroid Lutetia in 2010.

Years later, in July and August 2014, Rosetta starts to take pictures of the comet. All the followers were excited, the comet had the most peculiar shape that of a toy duck, two comets at once!

Now, November 12, the lander module Philae is released to softly land on 67P/Churyumov-Gerasimenko. We shall expect even more fantastic pictures from the surface of the comet just one hour after touch down. Afterwards, instruments are available to measure its crustal composition and structure, drill a hole, etc. The Rosetta orbiter and the comet jointly continue on their orbit closer and closer to the sun, and scrutinize how exactly, due to the radiation of the sun, the cometary sublimation activity increases. The comet will develop its coma, and the dust and plasma tails, all three indications for large amount of volatiles, and form one magnificent spectacle on the night sky, and calming down again, further away from the sun, all under the “eyes” and instruments of Rosetta.

Rosetta and Philae will study one of the Jupiter-family comets (their orbital period in less than 20 years, meaning they travel in orbits barely beyond the orbit of Jupiter), and it will be the first lander on a comet.

I am looking forward what secrets will be unraveled: We will learn about the primordial (from the origin time of the solar system formation) composition and isotope distribution of volatiles, gases, which we cannot measure unmodified in meteorites or anywhere else. They will tell us eventually how our atmosphere, oceans, and possibly the ingredients for life were delivered to Earth and how they evolved.

Tags: CEED, comet, rosetta, werner By Henrik Svensen
E-mail this page
Siste innlegg More ...
UiO > The Faculty of Mathematics and Natural Sciences >
The Centre for Earth Evolution and Dynamics > About the centre >