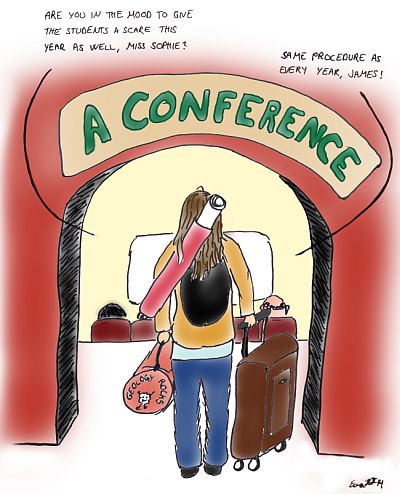 Text and image: Eva Hauk Fritzell
The abstract was accepted for a poster presentation, and after an unusually sunny Scandinavian summer the poster was ready for a trip to Germany. The first day started with a nice keynote “Thermal Expressions of Stick-slip and Creeping Subduction Megathrusts” by Kelin Wang, showing a correlation between the smoothness/roughness of incoming subducting plates and the magnitude of the earthquakes. This was followed by many other interesting talks.
The conference had a broad range of topics from surface processes to the deep earth. There were also quite a lot of analogue modeling which is something I do not have much experience with, so it was nice to see how things is done in the analogue world as well. The conference spanned over three days were each day consisted of two hours of presentations followed by a poster session. After the first poster session of the day it was time for a filling and tasty lunch which was followed by a new two hours of presentations on the next topic and a poster session. During the poster sessions tea, coffee and biscuits were served, and it was possible to walk around and check out the posters.
I think this was a nice way of getting to stretch your legs a bit, and a good opportunity to discuss the previous presentations more or just have a chat. The only thing that did not work so well in my opinion was the poster sessions for the topics which did not have that many posters, it tended to get a bit crowded around these posters and difficult to get in touch with the presenter. But since all posters was up during the entire conference it was no problem to have a look during another session.
On the second day of the conference there was a joint dinner combined with a river cruise on the ship MS “Belverdere”. During the cruise one of the chairs, Onno Oncken, gave an overview of the history of Potsdam and the places we passed. Here I got to know two Ph.D students, one from Germany currently studying in Mexico, and one from France which also was at a conference for the first time, and had given a presentation earlier that day. This made me think that I was quite lucky to get to go to a conference as a master student and see how a conference is before potentially being thrown into it as a Ph.D student doing a presentation. Also I think conferences are a good opportunity for master students to get an insight in both the world of academics and what is going on in other branches of their study.
As for my poster presentation, it was not as scary as I initially thought. People did not have the intention to test your knowledge, but was only interested in what you were working on and what plans you had for the future.
Tags: CEED, conference, geophysics, master student By Henrik Svensen
E-mail this page
Siste innlegg More ...
UiO > The Faculty of Mathematics and Natural Sciences >
The Centre for Earth Evolution and Dynamics > About the centre >