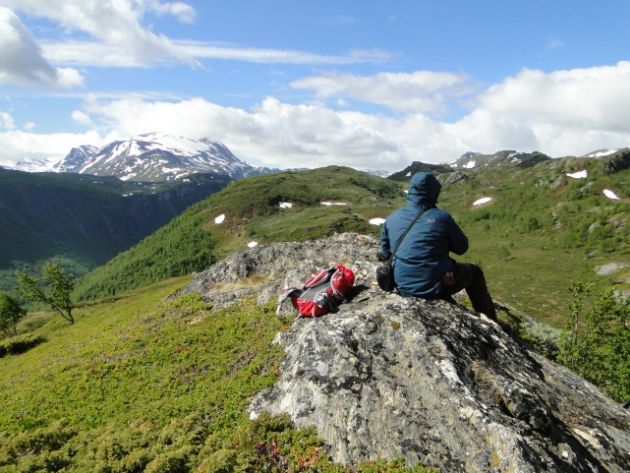 Now when I say mantle rocks, I’m talking about proper ultramafic chunks of mantle, i.e. peridotites, most of which is now serpentinized (turned into serpentinite with the help of water). It was never quite understood what they were doing there, they’ve been interpreted as intrusive at best, but we’re now looking at them in the context of a hyperextended passive margin. This is where you very slowly stretch the crust to almost nothing. This creates space for the mantle to rise, but since the whole thing happens so slowly (even for geological time), the mantle cools enough on the way up to stay unmolten. This is how you bring mantle rocks to the surface in a hyperextended margin. Could it be that our Norwegian melange rocks were exhumed on the Baltican passive margin in this way?

To explore this idea, Johannes Jakob and I were sent off for the summer to scramble about these rocks close to Lom in Jotunheimen. It was all very promising right from the beginning. Whenever we mentioned ‘living in a cabin in Bøverdalen’ we got people’s holiday accounts from this beautiful place which they longed to go back to. And a beautiful place it was indeed. We lived in a charming little farm cabin in a valley that was more or less everything we needed (after spraying the place for bugs). Torgeir Andersen, Fernando Corfu (both at CEED/UiO) and Steve Johnston (Victoria University, Canada) joined for parts of the field work, which made it all the more colourful.

So we set about mapping the units directly between two of the main serpentinite bodies. The weather was mostly beautiful, the terrain was rough and the rocks were very metamorphosed. Luckily we’d had a little intro by the supervisors and managed to identify the rocks on our own in no time.

And so the days rolled on, we looked at rocks all day and at our maps all evening.  Dinner became the highlight of every day. Until one day it started to rain and wouldn’t stop, so that by the afternoon we were rained in.  Our valley was flooded and we officially couldn’t leave the cabin until the weather improved. That’s how we were forced to take 3 days of indoor rest. Miraculously, the 3 days passed with no arguments, miss-haps, or cannibalism. We worked on our maps, played backgammon and cooked. It was very relaxing and lovely, but by the end of the 3rd day we were aching to move around the field again.

So, back to the field we went with a couple of visits here and there. We were looking at serpentinites sitting in metamorphosed marine sediments. There were metaluminous sediments, graphitic sediments and loads of muscovite all the over the place. This is all quite good for our hyperextension theory, as the graphite and aluminium rich rocks must have originated as marine sediments. Add to that we don’t see much magmatism around, which us what you would normally expect if this was an ophiolitic melange. But still, we need a little more before we can set about proving our hyperextended Baltican margin theory. Maybe some rock ages would help.

Enter Fernando; and off we go in search of a gabbro nearby where he’d once found zircon. He mentioned it was by a river which he attempted to cross but didn’t quite find a point to do so at the time, so we should go back and try again. When he was talking about it, it sounded like a soft stream, maybe trickling in places, but as we got closer I started to abandon my gentle stream idea as the roar of the river became audible.

It was more of a gushing canyon with elaborate waterfalls and oh-so-steep valley walls, and here we were, trying to cross it. I thought this is it, this is how my life ends: following Fernando across a river. Luckily the boys came to their senses and decided to follow the river upstream to find a crossing point. We never did find one; we ended up following the river all the way to the source. But on the plus side, the river banks are well exposed rock so we filled in our maps a little.

By the end of our four weeks in the field, we found that not only were our serpentinite bodies sitting in metamorphosed marine sediments, they showed various degrees of ophicalcite alteration, a process where you introduce carbonate veins into your serpentinising rock. You’ll hear more about this from Johannes, but we reckon the process is directly related to exhumation in a hyperextended margin. So now that we are back from the field, we’re having a closer look at our samples and dating some of the rocks.

The work is still ongoing, but we haven’t yet found anything to contradict the hyperextension theory, which is a very good start. The field period was a fantastic way to spend the summer, but now that it’s autumn, I’m glad I’m walking around flat land, at sea level, with an indoor toilet whose roof doesn’t leak!

Tags: CEED, caledonides, fieldwork By Henrik Svensen
E-mail this page
Siste innlegg More ...
UiO > The Faculty of Mathematics and Natural Sciences >
The Centre for Earth Evolution and Dynamics > About the centre >