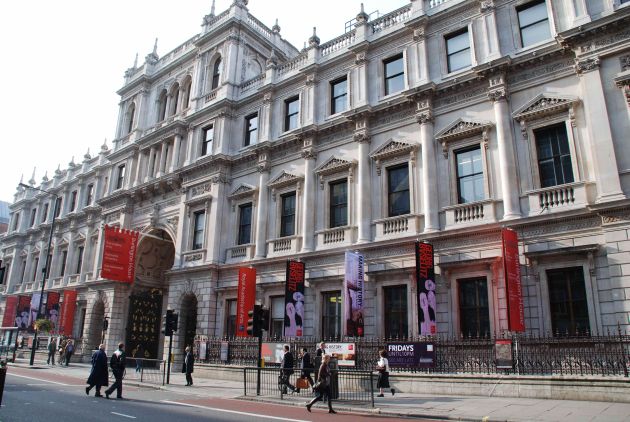 'Deep Earth Processes - windows on the working of a planet', was a meeting organized by the The Geological Society of London which took place on the 15th September and 16th September, 2014 at The Geological Society of London (Burlington House, see image) in the United Kingdom. The idea was to come together to share ideas, latest results and ponderings on processes which shape the depths of our planet.

Sessions covered during the meeting ranged from using long wavelength normal modes of the Earth to investigate deep mantle structure, to better constraining the composition of the lower mantle using high-pressure laboratory experiments and from numerical studies of core formation and evolution to linking surface expressions to deep Earth processes. Our CEED members whom attended the meeting had an enjoyable and scientifically-rewarding experience and look forward to similar meetings in the future.

Marzena Baron, a Ph.D student in CEED's Deep Earth group, presented her recent work on melting relations in the MgO-SiO2 and CaO-MgO-SiO2 systems. Her work aimed to determine the effect of pressure on the eutectic melt composition of several mineral assemblages. The poster sessions were held in the historical library of Burlington House, a room which served as a perfect back-drop to the meeting.

I presented work from a recent paper which detailed the possibility that the dynamic structure of the lower mantle has changed little, on a global-scale, for the past several hundred million years.

The meeting also featured several keynote talks, each of which aimed to highlight areas of current research in deep Earth dynamics. Three such presentations were given by John Hernlund, Arwen Deuss and Matthew Jackson.

John Hernlund from ELSI (Tokyo Tech) talked about the 'Core Heat Paradox' – the proposition that Earth's core-mantle boundary has cooled by >1,100 K since 3.5 Ga, a number which is difficult to explain for any plausible mantle composition. His work suggests that there are three potential solutions to the paradox: (1) density- stratification of liquid regions in the deep Earth; (2) alternative buoyancy mechanisms, such as ex-solution of nominally non-siderophile elements and (3) a decrease in core conductivity due to the presence of Hydrogen.  He concluded that these solutions need not be mutually exclusive – but that as end-members, they are testable scenarios.

Arwen Deuss from the University of Cambridge talked about the seismic structure of the inner core, and its dynamical implications. Using both body waves and normal modes to study small scale and much larger scale features of the deep Earth, respectively, she focused on trying to understand the observed hemispherical pattern of inner core anisotropy.

Matthew Jackson from UC Santa Barbara spoke about mantle plumes entraining material from the deep mantle. He suggested that geochemically distinct plume components at the surface (i.e. the double track seen in Hawaii) could be explained by two distinct plumes, one sourced from an enriched lower mantle anomalous region, and the other from a depleted lower mantle source.

With a great number of scientists from such diverse branches of geophysics, this meeting proved to be a very interesting and valuable workshop for myself, my fellow CEED members, and indeed for all attendees. To be able to better constrain, understand, and interpret the physical and chemical nature of Earth's deep interior, we need to look to those processes that these properties control: mantle convection, surface volcanism, and plate tectonics, to name a few. To do this requires interaction across disciplines.

Meetings such as this are invaluable to us as scientists, and allow us to meet, chat with, hypothesize with, and sometimes argue with, fellow researchers. We need such a multidisciplinary platform for our understanding of Earth's interior to grow. We look forward to meetings such as this in the future, and thank the hosts, sponsors and fellow attendees for a productive workshop!