From Russia with Lava

In August 2015, a group of researchers from the CEED Earth Crisis group went to Kamchatka to collect samples from the recent eruption of the volcano Tolbachik. An interesting finding was the presence of salt deposits, which can provide key information on the composition and chemistry of salts and metals in the volatile phase. 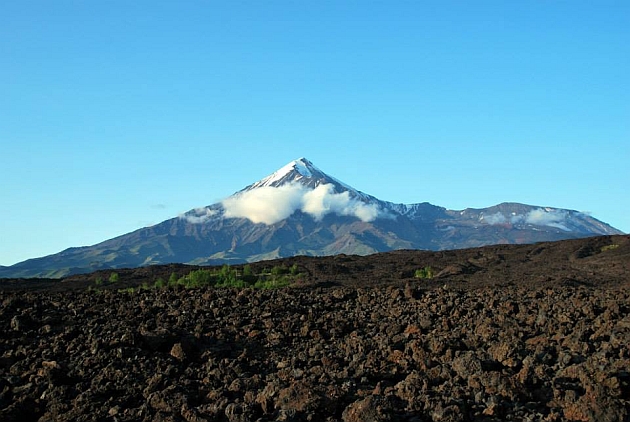 Kamchatka is not the most well-known travel destination for Europeans; a remote peninsula east of Siberia that sticks out into a cold and rough Pacific Ocean. The easiest way to get there is by the longest domestic flight in the world, a near 9 hour journey from Moscow. The area is famous to most for being full of mosquitos, salmon, and bears, and is the name of that tile in the Risk board game that makes Asia so difficult to hold on to. What is perhaps less well known, is that it is also a volcanologist’s paradise. The Pacific Plate is currently subducting beneath the North American and Eurasian plates, with a complex plate configuration around Kamchatka where the Kuril and Aleutian trenches meet. The result is abundant volcanism, manifest as two volcanic belts along the peninsula either side of the central Kamchatka River valley. There are around 160 volcanoes in the area, 29 of which are known to be still active. The tallest volcano is Klyuchevskaya Sopka at 4750 m, the highest mountain in Russia outside the Caucasus.

A group of researchers from the CEED Earth Crisis group went to Kamchatka in August 2015 to collect samples from the recent eruption of Tolbachik. This basaltic volcano is an impressive structure comprised of two overlapping volcanoes. The western Ostry (pointy) Tolbachik is a likely extinct stratovolcano, while the eastern Plosky (flat) Tolbachik is an active shield volcano with a series of small nested calderas at the summit. Recent eruptions in 1975-1976 and 2012-2013 have formed on the flanks of Plosky Tolbachik, fed by lateral dykes propagating 10’s km away from the summit. The eruptions were a mix of explosive events that built rows of large cinder cones and extensive basaltic lava flows that travelled down the volcano flanks. Both eruptions are among the largest global eruptions of the last few decades, with the most recent eruption estimated to have been 0.55 km3 in pre-eruptive volume (Belousov et al., 2015). The early lava fields in 2012 were rubbly a’a flows that travelled several km to the west of the fissure. Later on the eruption flow rate subsided, leading to ropey pahoehoe flows to the southeast. Extensive lava tubes formed on the volcano flanks, where channels of lava left long, thin tunnels when they eventually drained. In several places the roof of the lava tubes has collapsed, allowing access into the subterranean world inside the lava.

At the time of our field trip, these lava tubes were still extremely hot. Cooling lava has developed air circulation patterns that draw in fresh air in the lower parts of the lava tubes and expel heated air higher up the volcano flank. We measured exit air temperatures up to 427 °C two years after the eruption stopped. An interesting finding was the presence of salt deposits at these warm cave entrances, formed by cooling gases precipitating as they mix with the outside air. These deposits are interesting because they tell us something about the composition of gas phases in an explosive eruption plume. As the plume cools as it mixes with the atmosphere, volatile species form salts on solid particle surfaces. These ‘ash-leachates’ remain attached to the tephra until they are deposited and/or rained off.  Previous experiments have shown that ash-leachates can be harmful to the environment in which they are deposited as they contain abundant acid and heavy metal species (e.g. Frogner-Kockum et al., 2006; Jones & Gislason, 2008). However, sampling fresh ash-leachates is extremely difficult, given how soluble they are. There are still gaps in our understanding of volcanic gas chemistry. The salt deposits at the lava tube cave entrances, which are protected from the elements, can provide key information to the composition and chemistry of salts and metals in the volatile phase. We will be working in collaboration with scientists in Russia and Iceland to accurately measure these salt deposits to better understand their impact in the natural environment.

Take a look at the video: investigating lava tube entrances