My interest in the deep, cold far North might seem an interesting arena of study for an Aussie but such is the international domain of geosciences – research takes you places, and not just for interesting conferences! 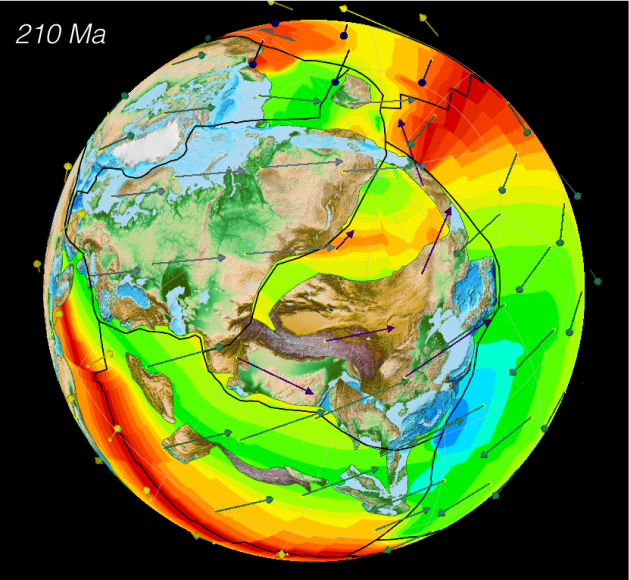 As a postdoctoral researcher at CEED, Department of Geosciences, my main interest is in reconstructing the ocean floor, fitting together pieces of continents and modelling deep mantle structure. In particular, I am interested in the Arctic region and its evolution in conjunction with adjacent oceans.

Importance of the oceans and marine geosciences

With much attention focused on climate change, resource exploration, ocean acidification and coastal hazards, coupled with new technologies that allow us to extend deeper into our oceans and delve into the palaeo-record, the need for marine geoscientists to possess skills that extend beyond the research laboratories is critical. Oceans cover more than 70% of our planet’s surface and yet it is estimated that 95% of this domain remains unexplored.

New challenges in the coming decades

Despite outstanding questions and thirst for basic and applied research, the marine geoscience community is facing new challenges ranging from budgets to public outreach. The Symposium also coincided with the release this year of the community-based Decadal Survey of Ocean Sciences commissioned by the U.S. National Research Council (download free here), which identified several high-level research priorities for the coming decade and noted rising infrastructure costs, research needs and budgetary cuts need to be balanced for effective future progress within the ocean sciences. In this context, I also recommend reading the recent opinion piece “We must defend science if we want a prosperous future” originally published on The Conversation here.

As someone whose research interest lies in plate reconstructions and the deeper mantle structure, this workshop was a pertinent reminder of the interdisciplinary requirements for successful geoscience research; other participants included geochemists, geophysicists and oceanographers studying hydrothermal vents and microbial biospheres, palaeo-climate records and ice-sheet dynamics, to name a few.

I am particularly interested in the evolution of the Arctic Ocean and its present and palaeo-connections with North Atlantic and Panthalassa (pre-Pacific ocean basin) and the fate of subducted oceans as they descend into the convecting mantle, down to around 2900 km in some cases.

The theory of plate tectonics describes the time-dependent motion of Earth’s lithosphere, including both the oceanic and continental domains, and the construction of plate models heavily relies on reconciling the seafloor spreading history of ocean basins. However, subduction zones are the focus of plate destruction whereby (usually) oceanic lithosphere is progressively recycled into the mantle and thus kinematic data is lost with time.

To reconstruct the location of continents and oceans and to evaluate the feedback and influence on processes including volcanism, the atmosphere, hydrosphere and biosphere, a wide range of complementary datasets are sought. A global view (complemented by regional studies) is critical in unraveling the dynamics of our planet as a whole and facilitating the communication between the diversity of geoscience divisions. Cross-disciplinary and international discussions is particularly relevant in the Arctic, which involves numerous climatic, environmental, social and political stakeholders.

The Symposium was organized by the Consortium for Ocean Leadership, a non-profit organization, which represents several public and private research and education institutes, mainly within the US. The Consortium’s focus lies in marine policy, research, outreach and education including being involved with the Integrated Ocean Drilling Program (IODP) and Ocean Observatories Initiative (OOI), as examples. The Symposium was funded by a grant from NSF, and while the symposium had a distinct American flavor and viewpoint, the skills that were gained and relevance that it holds are international.

This year, the other twenty-five or so successful “miggles” (MGLS) participants are based at several US institutions as well as three researchers based in Europe, and included an outstanding number of female participants. The five days consisted of a variety of training sessions, breakout group and discussion panels.

Guest speakers included members from the media who gave advice in contacting journalists, noting that if you don’t reach out to journalists, someone with less knowledge and/or an agenda will. Participants also met with NSF program leaders, including an excellent speech by Barbara Ransom who hammered home is importance of contacting your program officer and to always keep three legs on your finding stool…remain stable!

One day included a visit to Capitol Hill to talk with staffers and included a presentation by Senator Whitehouse from Rhode Island, who warned against the wheels of the “Propaganda machine” in the context of climate change (see “Senator with the Snowball”).

Communicating results with other geoscientists at international meetings, industry partners as well as the broader community, educators and policy makers is of key importance in looking towards a sustainable and science-based future. Whilst understanding the marine domain is arguably at the centerpiece of many geoscience disciplines, the skills developed at the workshop were not restricted to the marine community.

The 2015 MGLS symposium was an insightful and fantastic workshop and I would encourage any eligible researchers to apply for the next round currently planned for 2017 (applications usually close in the December prior). Read more about the workshop MGLS, 16-20th of March 2015 in Washington D.C.

By Henrik Svensen
E-mail this page
Siste innlegg More ...
UiO > The Faculty of Mathematics and Natural Sciences >
The Centre for Earth Evolution and Dynamics > About the centre >