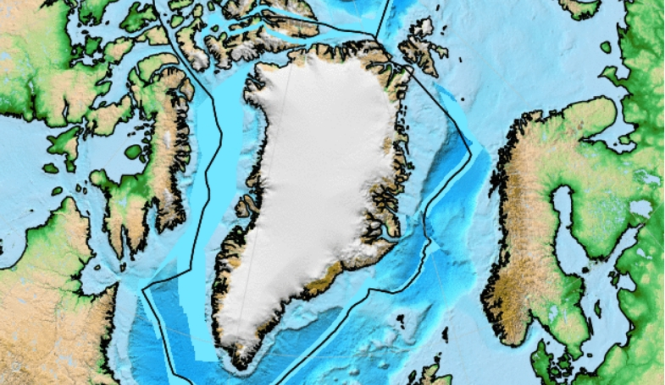 The Earth’s tectonic plates have pulled apart and come together multiple times during its long history. These processes leave hallmarks of the past layouts of continents, which allow scientists to reconstruct how the plates have moved through time. While we know from the geological record that these movements took place, it is sometimes difficult to work out when key events occurred and their correct order. One such example is just before the formation of the northeast Atlantic Ocean, around 62-55 million years ago, when there were several changes in the relative motions of North America, Greenland, and Eurasia (the combined landmass of Europe and Asia) in just a few million years.

A technique called radioisotopic dating allows us to determine the exact age of volcanic rocks. The new study shows that the Greenland plate began to push against part of the Eurasian plate around 61.8 million years ago, leading to the formation of a mountain belt between Greenland and Svalbard. This precise age of first compression occurred at the same time as other changes around the edge of the Greenland plate. For the first time, this study provides evidence that these events are connected.

The findings in the new study gives scientists who work with plate tectonic reconstructions the ability to refine their models to understand how North America and Eurasia began to break apart.

Plate Tectonics in the Palaeocene Epoch

The Palaeocene was also an important time period for plate tectonic motions in the northern hemisphere. At the time when dinosaurs became extinct, the North Atlantic Ocean was still in its infancy and seafloor spreading did not extend further north than Canada and Portugal. Over the course of the next few million years, North America and Eurasia began to break apart, which eventually resulted in a seaway that connected the Atlantic and Arctic Oceans.

However, the break up was a complicated process. As the Atlantic Ocean grew northward, branches opened on either side of southern Greenland (between Canada to the west and Scotland/Norway to the east). The western arm pulled apart first, but at some point both of these rift zones were active, and a mountain range was formed in what is now Svalbard. This meant that for a short period (geologically speaking) Greenland was its own tectonic plate, moving independently of both North America and Eurasia.

The aim of our study is to pinpoint exactly when Greenland and Svalbard began to push together, as this compression is directly related to the rifting further south. This means that understanding the geological history of Svalbard can shed light on when and why Greenland became its own tectonic plate.

The Geology of Svalbard

The rocks in south-central Svalbard, adjacent to this ancient mountain range, are sedimentary deposits that were formed in deltas and shallow seas. Mountain ranges often have low-lying regions alongside them (called basins) where sediments accumulate. Modern examples include the Po Valley next to the Alps in Italy and the Ganges Basin next to the Himalayas in India.

Importantly, these basins form at the same time as the mountains grow, which means that techniques to work out the age of rock formations can be used to accurately date when both the basin and the mountains started to form.

An important tool for working out the age of a rock is radioisotopic dating. Radioactive isotopes of elements are unstable, meaning that over time they will degrade from one form to another.

The half-life (the rate at which radioactive decay occurs) of each system varies from milliseconds to billions of years, which means that different isotope systems can be used for dating, depending on how far back in time your interest lies.

When considering millions to billions of years in the past, uranium-lead (U-Pb) dating is used as 238U has a half-life of about 4.5 billion years. Zircon crystals are ideal for this method as they form in cooling magma chambers. Zircons can have a high uranium concentration, which means that if they are found in volcanic deposits such as lavas or volcanic ash layers, they can be used to accurately date those rocks.

The sediments in Svalbard have numerous volcanic ash layers preserved within them. These ash layers are likely to have originated from volcanoes in northern Greenland and Ellesmere Island, now over 1000 km away across the ocean.

Based on the dating of these ash layers it is possible to calculate when sedimentation first began in central Svalbard. This age of valley formation, and therefore the initiation of compression between Greenland and Svalbard, is predicted to around 61.8 million years ago.

This age is significant because it overlaps with key events further south. Around 61.6 million years ago there was a dramatic change in the sedimentation in the North Sea from limestone to sandstone and siltstone. The speed of seafloor spreading increased between Canada and Greenland, and many faults were active along the edges of eastern Greenland.

The synchronicity of these events strongly indicates a common driving force affecting all margins of Greenland.

There are several possible candidates that could have caused the shift, either individually or together.

The acceleration of seafloor spreading in the Labrador Sea has the potential to drive changes in relative plate motions. It is also plausible that events further afield may be important. Greenland was in between the North American and Eurasian plates, so the change in motion may be a result of forces acting on one of these much larger plates.

Another possibility is the arrival of a mantle plume at the base of the crust. Mantle plumes bring considerable heat from deep in the Earth, resulting in widespread crustal melting and volcanic activity. The North Atlantic Igneous Province (NAIP) is one such example. The first pulse of magma arrived at the surface around 62 million years ago and is still causing enhanced melting today to form Iceland.

The scale of volcanic and magmatic products from the NAIP is truly enormous. Current estimates put the total amount of magma at 6 to 10 million cubic kilometres. Much of this activity is still exposed along the edges of the northeast Atlantic, including the British Isles, Faroe Islands, and East Greenland. There are also considerable deposits found in West Greenland. It is therefore possible that the change in plate motions may be connected to this pulse of magma. However, further work is needed to test this hypothesis.

Note: This blog is modified from a version published 28 July 2017 on John Stevenson’s: Volcan01010. Read the original post.

Reference to the article in Scientific Reports:

By Morgan Jones
E-mail this page
Siste innlegg More ...
UiO > The Faculty of Mathematics and Natural Sciences >
The Centre for Earth Evolution and Dynamics > About the centre >