A research team from the University of Padova, including (returning) CEED postdoc Sara Callegaro, reported in Nature Communications (Capriolo et al., 2020) direct evidence of abundant CO2 in basaltic rocks from the end-Triassic Central Atlantic Magmatic Province (CAMP). Part of the carbon budget comes from the mantle and/or the deep crust, adding to shallower carbon sources from volcano-sedimentary basins. A degassing scenario disturbingly similar to the one mankind is responsible for in the Anthropocene.

Several mass extinction events from the past have been linked to huge volcanic episodes, called Large Igneous Provinces (LIPs), with the rationale that large volumes of volcanic degassing triggered global climate changes. A cocktail of poisonous and greenhouse gases such as carbon and sulfur dioxide, methane, and halocarbons was able to change the global climate and severely damage the ecosystems constituting the deadly breath (or kiss) of LIPs. If it sounds familiar, it is because something similar is happening in the Anthropocene, the geological epoch we live in. 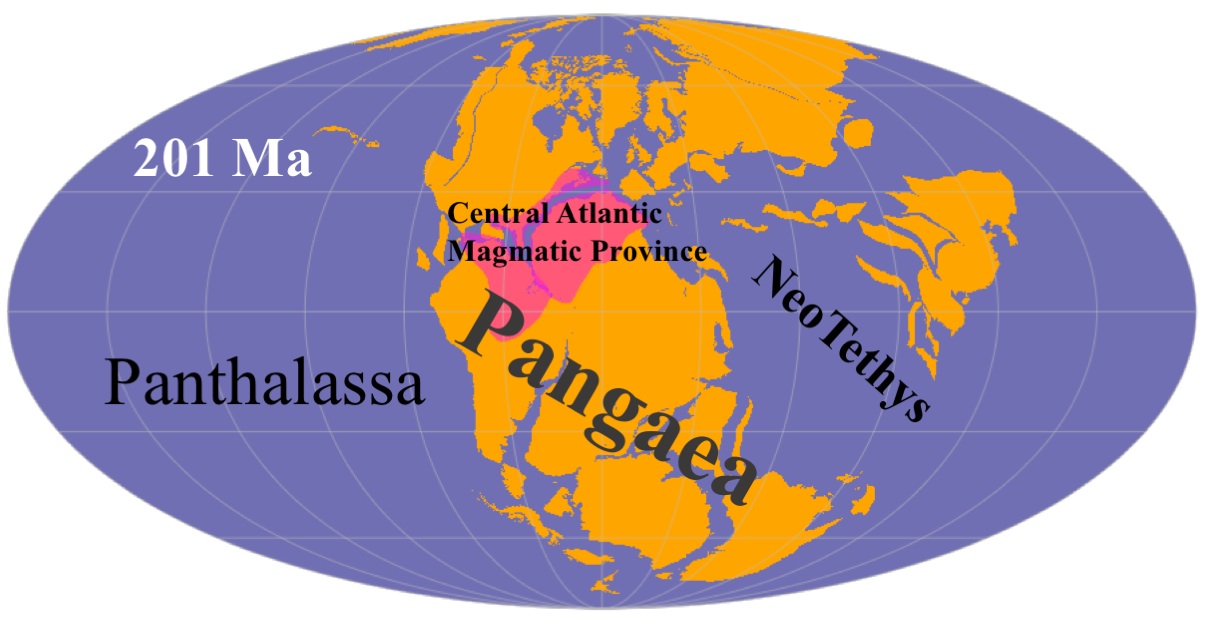 In the sedimentary record there is compelling evidence for the disruption of the carbon cycle during these volcanism-extinction pairs. However, it has always been extremely tricky to find traces of carbon in LIPs magmatic rocks, given its tendency to degas from magmatic systems very early, and deep. Perhaps we were all thinking too big, hence not looking small enough! The direct evidence for the carbon dioxide load in magmas of an End-Triassic LIP, the Central Atlantic Magmatic Province (CAMP), was found in tiny exsolution bubbles trapped in melt inclusions within minerals. Think of it as a Matryoshka doll: basalt rock – minerals – melt inclusions – bubbles. The team looked at samples (including over 200 rocks) taken from all over the CAMP.

Raman spectroscopy revealed the presence of CO2 in the bubbles (Fig. 1). There are often multiple bubbles in a single melt inclusion, meaning that the minerals randomly sampled a glass inclusion with bubbles already present. Also, they found water or sulfur only in the trapped glass, never in the bubbles. This means that the entrapment happened deep enough (ca. 12km) for these gases to remain dissolved in the melt, while carbon dioxide had already started to exsolve and form bubbles, as it does in a glass of champagne. This is important because it suggests that this CO2 comes from the deep magmatic roots of CAMP, maybe from assimilation of metasedimentary rocks or from the mantle source of CAMP basalts (Fig. 2), which seems to contain some sedimentary material recycled during previous subduction episodes. This large amount of CO2 adds to that which is produced in shallower volcanic basins, such as the Amazon basin, a region in which CEED researchers of the Earth Crises team have long been active.

Flushing of CO2 from the deep can play a key control on the emplacement mode of CAMP magmas, favouring rapid eruption pulses. Estimates suggest that the amount of CO2 that each CAMP magmatic pulse injected into the end-Triassic atmosphere is comparable to the amount of anthropogenic emissions projected for the 21st century “2°C warming scenario”. Such a CO2 emission pace contributed to cause one of the most dramatic extinctions in Earth’s history. Perhaps a troublesome warning from the past, but one we should gratefully take.

By Sara Callegaro
E-mail this page
Siste innlegg More ...
UiO > The Faculty of Mathematics and Natural Sciences >
The Centre for Earth Evolution and Dynamics > About the centre >