A study by Ella Stokke and Morgan Jones (CEED, University of Oslo) in collaboration with Emma Liu (University College London) is published this week in the open access journal Volcanica. It presents new data on basaltic volcanic ash layers that are preserved in Danish sediments originating from the North Atlantic Igneous Province ~55 million years ago. The findings indicate that these ashes were formed by explosive hydromagmatic (water-magma interactions) eruptions, most likely as the volcanoes were submerged by the newly formed northeast Atlantic Ocean. This is by far the largest known explosive basaltic volcanism ever documented. 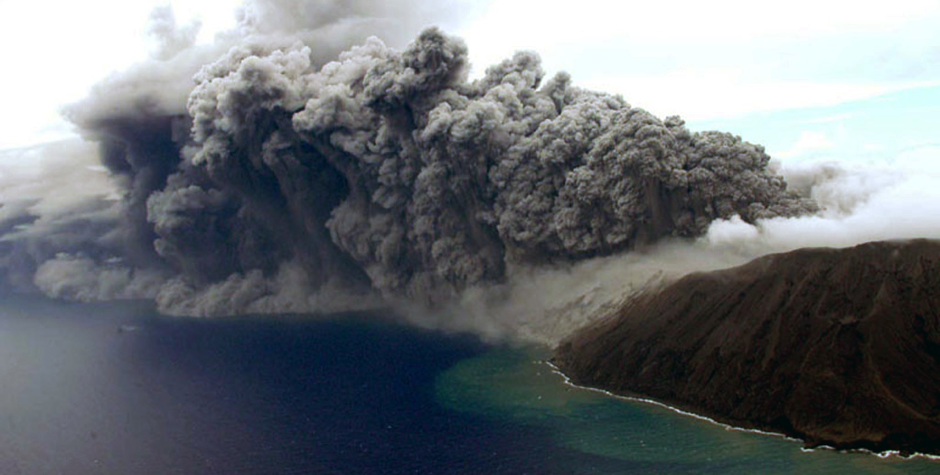 An example of an explosive hydromagmatic eruption. The photo show an ash plume rising from a vent at Anatahan in the Pacific Ocean on 24 August 2005. Photo by Takeshi Matsushima, 2005 (Kyushu University)

Volcanoes have a range of eruption styles, ranging from lava flows to explosive events creating ash clouds that can travel thousands of kilometres. Documenting the range of possible volcanic behaviours is critical for understanding their impacts on the environment and climate, both in the present and in geological history.

The way a volcano erupts depends largely on the type of magma, in particular how much silica it contains. Volcanoes that erupt low-silica (basaltic) magmas are generally not very explosive, as the magma is so fluid that gases within the magma can escape before the pressure builds up enough to cause large explosions. An exception to this is when basaltic magma comes in contact with water, which can trigger explosive reactions. A recent example is the 2010 eruption of Eyjafjallajökull in Iceland, which produced ash clouds that grounded flights across Europe. The explosive nature of that eruption, and the large amount of fine-grain ash it produced, was driven by water-magma interactions due to the glacier on the volcano.

This study explores the physical and chemical properties of hundreds of basaltic ash layers found in sediments exposed on the island of Fur in northern Denmark. The ashes are very thick (up to 16 cm) and bear all the characteristics of fall deposits associated with explosive volcanoes. These layers pose a conundrum because they appear to have originated from the North Atlantic Igneous Province, a huge magmatic event that started around 55 Million years ago that is now exposed in the mountains of northwest Scotland, the Faroe Islands, and East Greenland. All of these localities were >700 km from Denmark at the time of the euption, and modelling suggests that even with powerful winds blowing the ash in the right direction, the eruption columns must have reached over 30 km altitude for the ash to stay airborne.

The only other known eruptions that can transport large volumes of ash these distances are the largest silica-rich eruptions such as Yellowstone (USA) and Toba (Indonesia). The largest ash layer in Denmark is estimated to have formed from an eruption with a total magma volume of 1000 km3. This is about half of the size of the largest Yellowstone and Toba eruptions, but over 7000 times larger than the Eyjafjallajökull eruption and enough to cover all of Norway in 2.6m of ash!

Magma-water interaction (i.e. a ‘hydromagmatic ‘eruption) has been suggested as a possible cause for these extremely explosive basaltic eruptions, but until now has never been tested. This study combined two methods to assess whether a hydromagmatic origin for the Danish ashes is plausible. First, sulfur concentrations preserved in volcanic glass grains (shards of rapidly cooled magma) are sensitive to the ambient pressures at which the eruption occurred. The sulfur concentrations in the Danish glasses are generally elevated, suggesting that the eruptions occurred at higher-than-atmospheric pressures (such as under water). Second, the shape and vesicularity (the amount of bubbles) of glassy ash particles give clues on how the eruptions occurred. The ash particles display forms commonly associated with rapid quenching and fragmentation, as would be expected from water-magma interactions. Combined, these chemical and physical characteristics indicate a hydromagmatic origin.

Overall, the results of this study indicate that these extensive ash deposits in northern Denmark record a period of major volcanic activity in a shallow marine environment (<200 m water depth) as the Northeast Atlantic Ocean was forming. Spreading of the seafloor submerged the central axis of the North Atlantic Igneous Province between Greenland and the Faroe Islands. These results are important because the climatic impacts of explosive eruptions are severe. If a large, shallow marine basaltic eruption were to occur today, the climatic impact would be felt globally.