UiO The Faculty of Mathematics and Natural Sciences The Centre for Earth Evolution and Dynamics
Main navigation
Back to uio.no
Sub navigation Menu
About the centre > The CEED blog > 2021 > CEED goes to the North Atlantic

CEED goes to the North Atlantic

Wishing you a safe voyage and happy drilling, Morgan, Sverre and the whole crew!

Week Three on the JOIDES Resolution

We are now three weeks into Expedition 396 of the Integrated Ocean Discovery Program (IODP) aboard the JOIDES Resolution. We are drilling sediments and lavas that occurred during the breakup of the North Atlantic around 55 million years ago. The ship itself is an elderly stateswoman of the seas, conducting ocean drilling for over 40 years. Despite her advancing years, the laboratories on board are state-of-the-art and equipped with many instruments that can analyse what is brought up in real time. We have 19 scientists working alternate 12 hour shifts to keep the science going 24 hours a day, seven days a week. Two months at sea means we have to be completely self-sufficient so there is a dedicated team of technicians helping to keep the labs running smoothly. Without this team of local experts, some of whom have been sailing on the ship for nearly 40 years, we would be truly lost. So far we have had two machines break in the three weeks. One was repaired in a day, the second is currently experiencing advanced electronic surgery.

The working conditions are a strange blend of genius and monotony. The combined expertise of the scientists and technicians covers a huge range of scientific and engineering disciplines. Often there is real time problem solving required to work out what sediments we are drilling, where we are in the history of the Atlantic, what might be coming next, and when we should stop drilling and move to the next site. These exhilarating and stressful bursts of activity are accompanied by menial lab tasks. An inside joke in geochemistry is that our job is glorified dish washing. My personal tedious task this expedition is to weigh tiny samples to measure the amount of carbonate in the sediments we encounter. I am spending about 3 hours a day carefully tipping a few milligrams of mud into a tin capsule and waiting a few minutes to get a good estimate of its mass (the balance we weigh on is affected by the waves, so an ingenious piece of equipment takes the average mass over many waves to average this problem out). It’s not yet irritating, but we are only week three of eight so there is time yet!

The most fascinating aspect I am finding of being far from land is we are becoming a micro-ecosystem. After an initial 3 days transit, we have mostly been stationary and usually only moving a few kilometres when we do change site. The food scraps from the galley that are discarded overboard have brought the fish, and with them an impressive flock of resident birds. The majority are Fulmar, a graceful bird that looks a bit like a seagull but has a pipe-like nose on their beak. They are masters of riding the air currents caused by the waves, often gliding without flapping for what feels like minutes. There are maybe 200 or so that have made the ship their temporary home. Interspersed among them are the Gannets, a larger white bird with a wingspan of over 1 m and a distinctive yellow neck and black wing tips. These birds excel at dive-bombing shoals deep underwater. Watching them fish is mesmerising. I can imagine that Olympic diving was born from watching these birds at work.

The final regular birds around the boat are the Skua. These birds-of-prey look like a cross between a seagull and an eagle, with the temperament of a wasp. They will take out a fulmar or even the larger gannets if given the opportunity, although it seems for the most part that they are just harassing. However, I have seen two skua hunt and kill a cormorant nearly twice their size in the Faroe Islands, each taking turns to push the cormorant into the water as it desperately tried to take off. I have also had to rescue two tourists from a beach in Iceland that has strayed too close to a skua nest. I was driving by when they ran desperately towards the car, heads bloody from where the mother’s sharp beak had caught them. In summary, these are not birds to be messed with.

We also have the stowaways and the commuters. I saw a live bumblebee on top deck, despite us being over 300 km from the nearest land. The next day there was a confirmed sighting of a small sparrow-like bird. It was not clear if it was just taking a rest during migration, had been with us since Iceland, or had travelled out with the Norwegian fishing fleet that passed us a week ago (these were the only other boats we have seen since leaving Icelandic waters). A heron also flew over the ship the day before yesterday, but has not been seen since so it might have just been passing through.

The final faunal group took a while to turn up, but when they did it was magical. At 6 a.m. yesterday (lunch time for us on the midnight-to-midday shift) the 1st Mate said one word over the ship-wide speakers: “whales”. A large group of Pilot Whales had taken an interest in the boat and the fish below. A subgroup of about 15 were within reach of the boat, occasionally poking their heads up to see what we were up to. One pilot whale decided to do a little sunbathing, pectoral fins lazily flapping about in the wind. A second group of porpoises were jumping clear of the water about 200 m away. After weeks of scanning the horizon for any hint of whales, it was quite overwhelming suddenly have so many. I filled up both my phone and camera memories in record time. Pilot whales are technically one of the largest types of dolphins, and while porpoises look very dolphin-like they are in fact the smallest species of whale. The experience has got us hungry for more, so people are hoping for a sighting of one of the bigger ones as Minke, Humpback, Sperm, Fin, and even Blue Whales are known to occasionally pass through these waters. We live in hope. 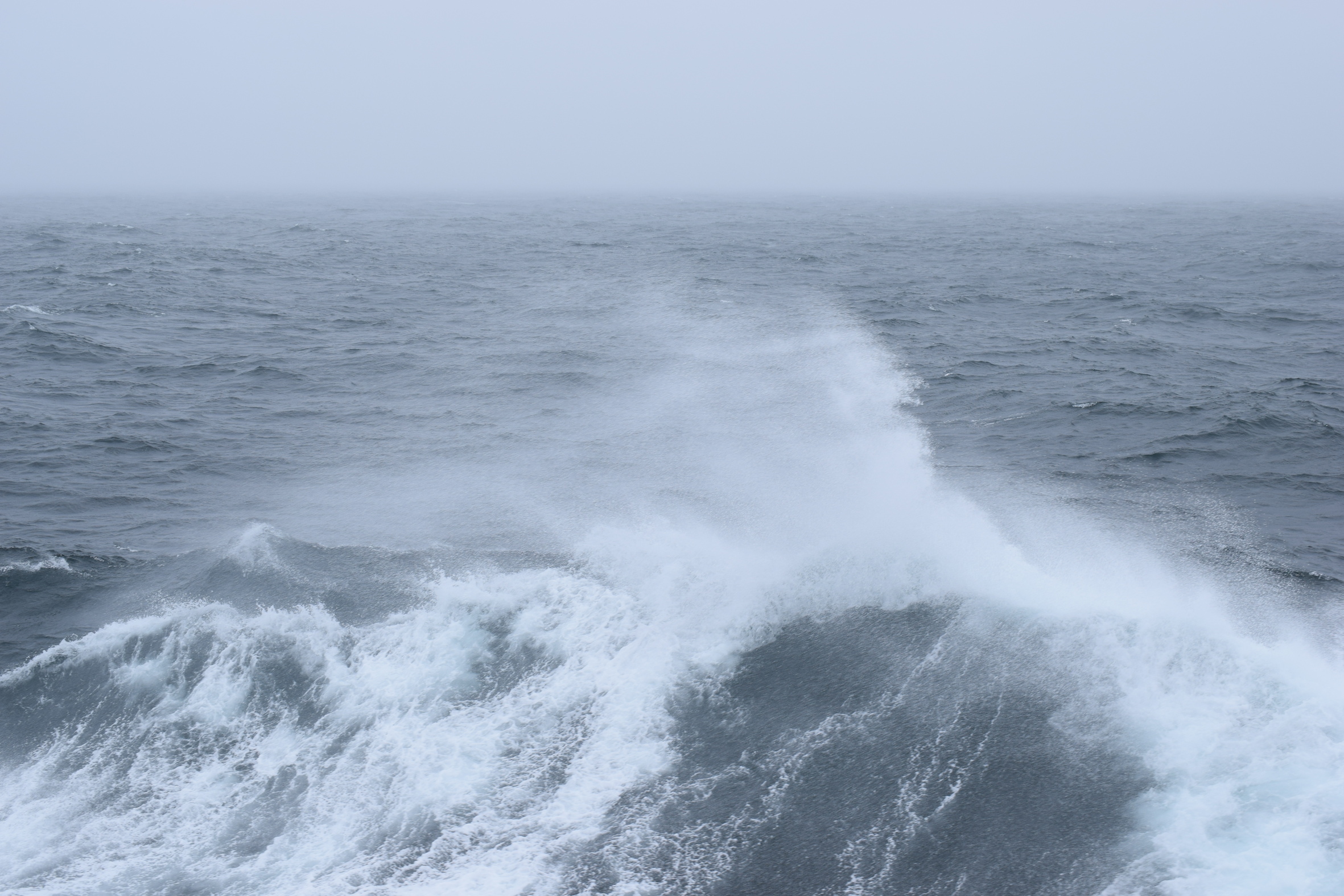 The Integrated Ocean Drilling Program (IODP) expedition 396 left from Reykjavík on the 11th August with CEED scientists Sverre Planke and Morgan Jones on board. The primary aims of the scientific cruise are to better understand the breakup of the Northeast Atlantic ocean, why so much magma was produced during breakup, and how it affected climate conditions in the Paleocene and Eocene. The expedition will start at the bottom of the Vøring Basin on the Norwegian continental margin, and will finish north of the Arctic Circle near the Lofoten islands. 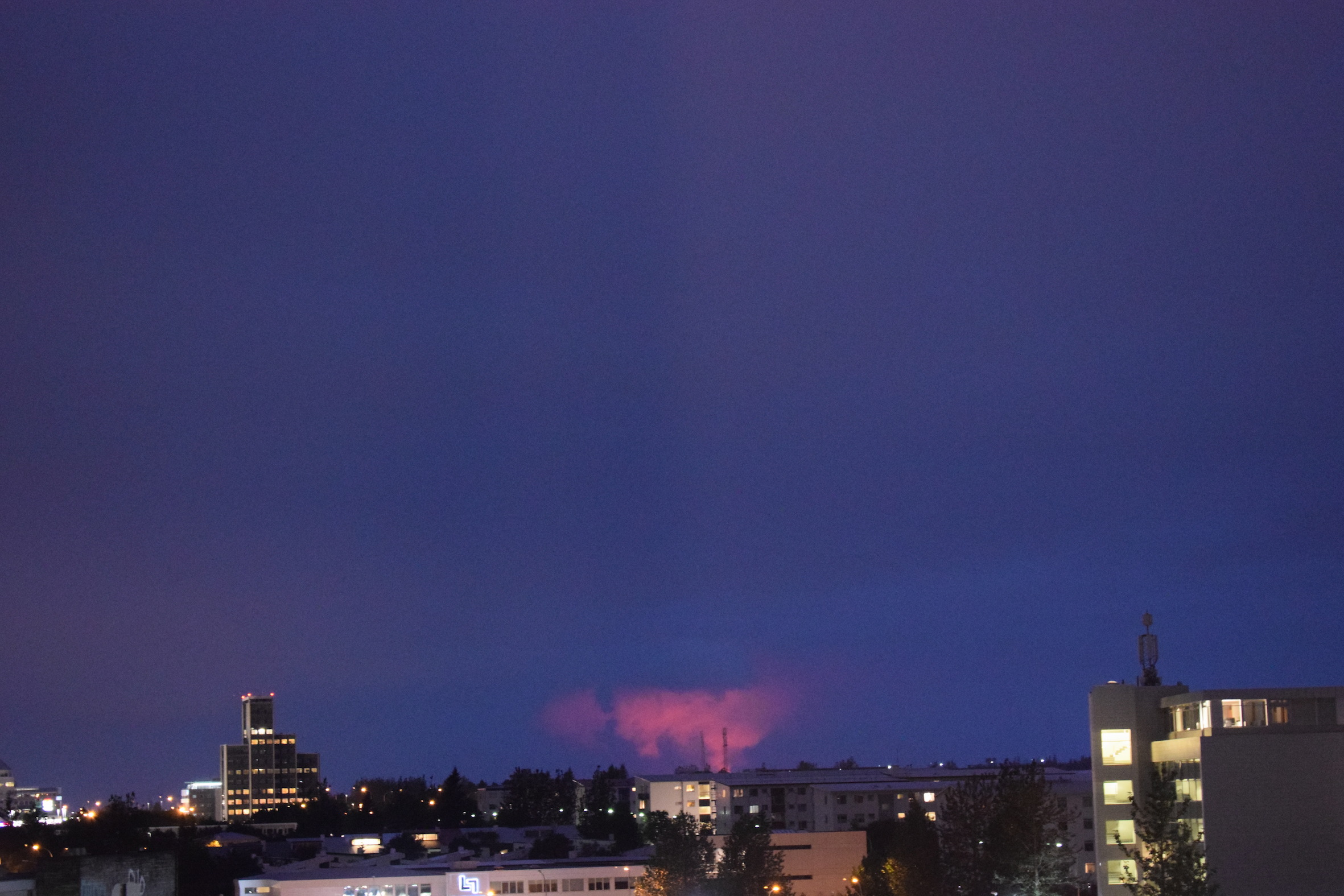 This is the first IODP expedition with scientific personnel on board since the start of the corona-virus pandemic, and many sacrifices have been made to get on board. All scientists and crew members had to quarantine for up to 2 weeks before flying to Iceland, then spend a week in full isolation in a hotel in Reykjavík. There was a worn path around each hotel room similar to a caged cat in a zoo by the end of the stay! Now that the ship has departed, the expedition is running with reduced staff so that bunks can be cordoned off if quarantining individuals is needed. We have two weeks of strict social distancing and facemasks, and then hopefully we will be able to relax in a corona-free environment for the final 6 weeks of the cruise. It is a learning curve for both scientists and ship crew alike, but (fingers crossed) the strict safety measures in the lead up to the expedition appear to have paid off.

We are now on day 4 of the trip and have arrived at our first destination. The site is called the Kolga High, which is about 300 km northwest of Trondheim on the Norwegian continental margin. The locality is on top of a vast underwater cliff that becomes the Jan Mayen Fracture Zone further out to sea. Unusually for an IODP core, after drilling through a thin sedimentary cover we will hit ‘basement’ rocks, but we are not sure what that will be. A sweepstake is being held, with age estimates for what we will encounter ranging from 55 to 600 million years, and rock type estimates from coral reef to granite. Later on we will hopefully drill a core through Eocene and Paleocene strata for a complete sedimentary section for paleo-climate data, and after that we will head to the basalt flows of the northern Vøring basin, and then into deep water to drill seaward dipping reflectors in the Lofoten basin. It is going to be very hard work as this would be a punishing schedule with a full scientific complement. We are split between two shifts, and the CEED staff are on the midnight to midday shift. In effect this means that we have had quite severe jet lag, coupled with a little nausea from the bumpy seas, and our bodies are very internal clock-confused. Hopefully the exhaustion of starting the work in earnest will help with the sleeping patterns.

The wildlife of the North Atlantic has not disappointed. So far, people have seen Pilot and Minke whales, Fulmar, Gannets, a Black-Browned Albatross, Skua, and Puffins. Now we are stationary for the next few days, we hope that some of the fish will be attracted to the lights of the boat at night. This is a quiet area of the Atlantic, we have only seen one other ship on the horizon so far. Hopefully this will help for future wildlife spotting. The final locality is north of the Arctic circle and we will arrive there in late September. This is prime aurora borealis viewing conditions so many on board are excited to see the sky go green. That is it for the first update. The second will be a bit more science-focussed once we have core on board. 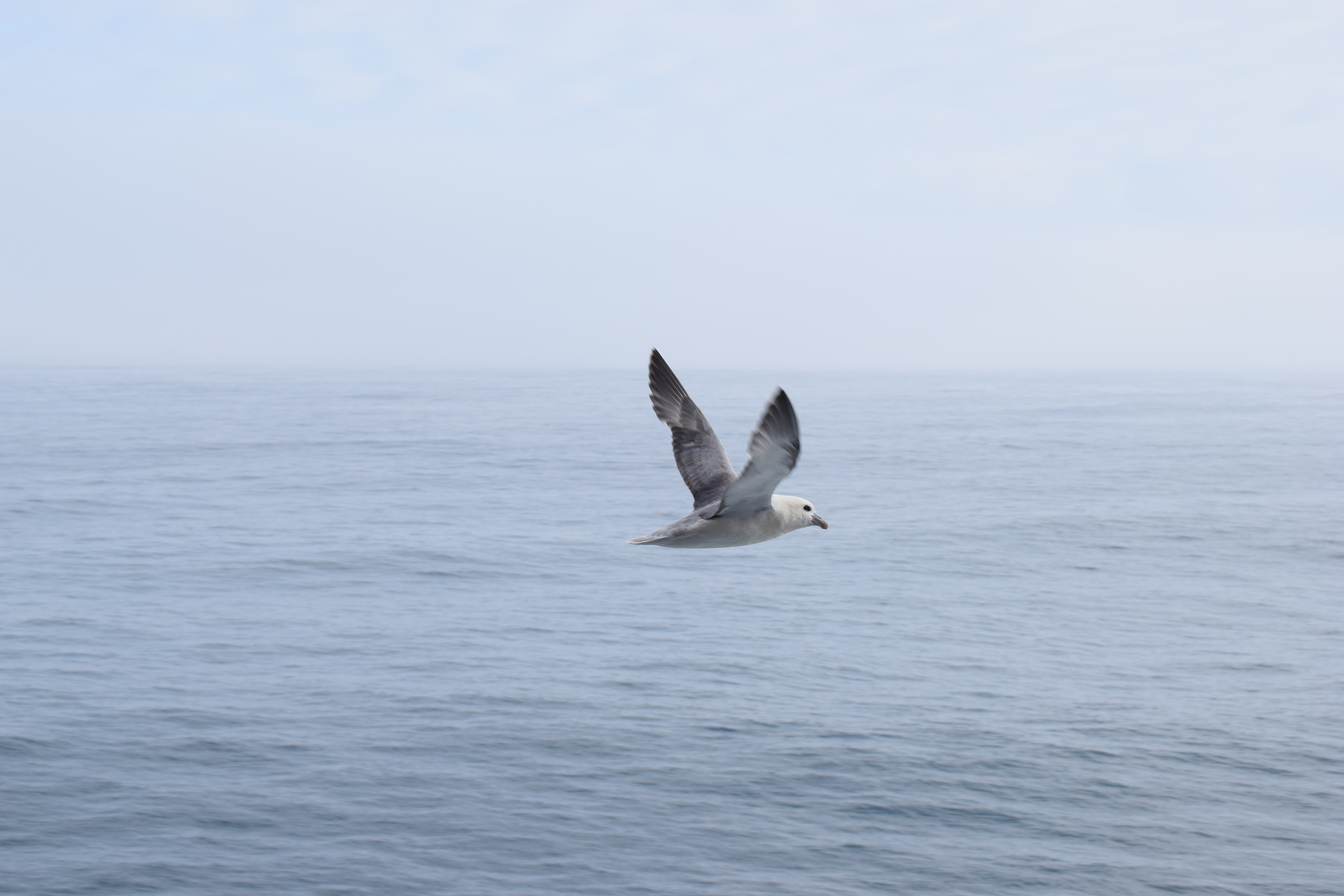 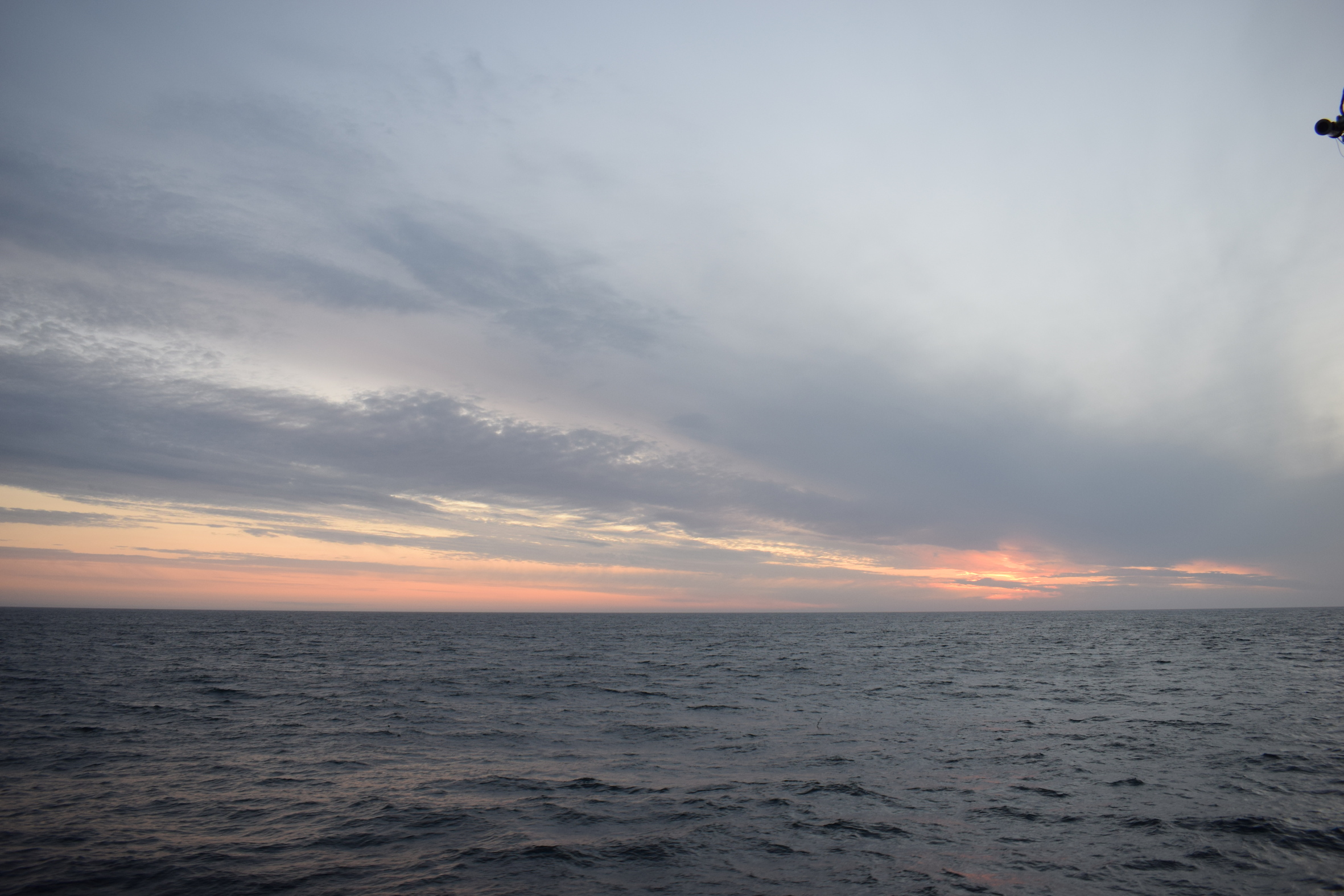 By Morgan Jones
E-mail this page