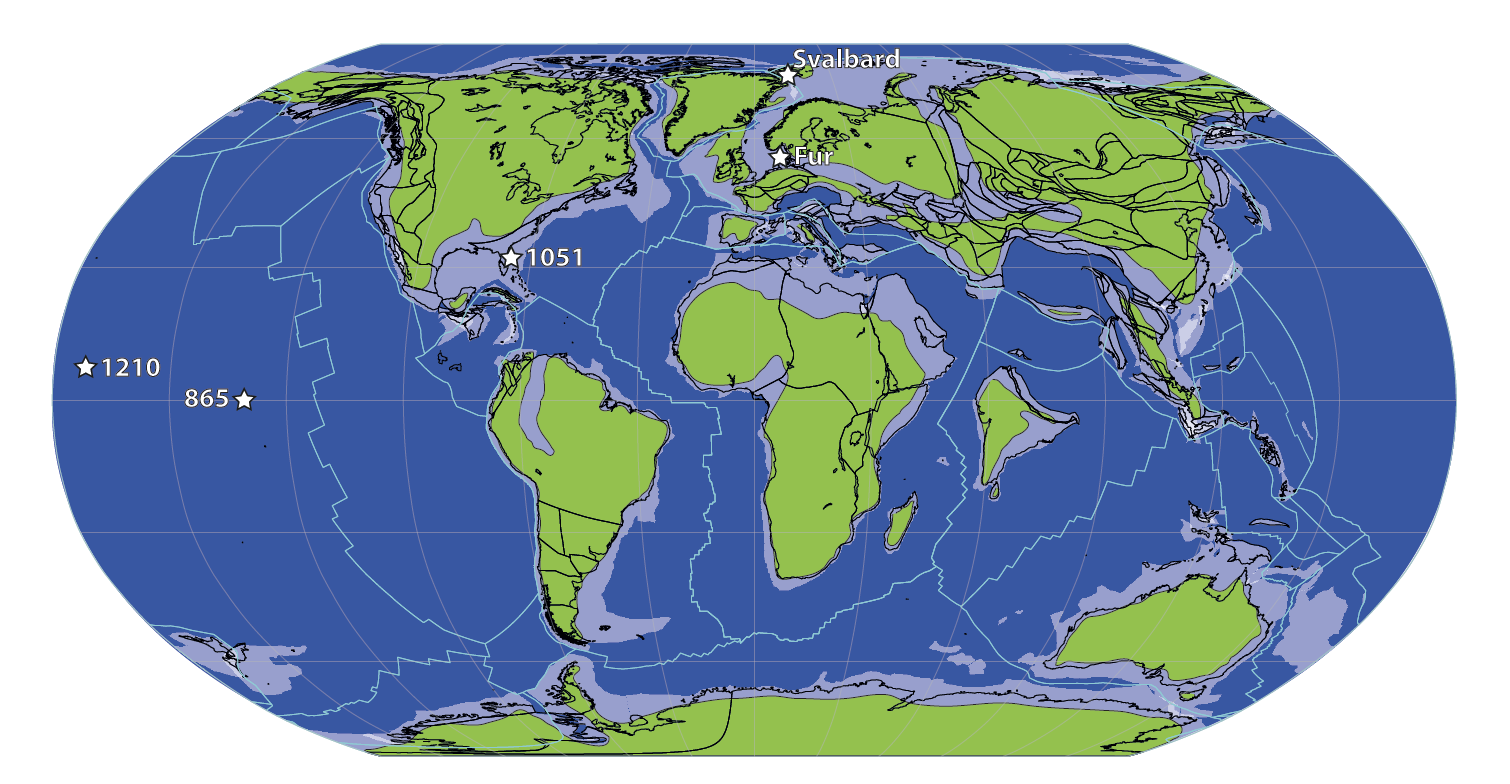 Figure: The sample locations used in this study. The numbers 865, 1051, and 1210 refer to carbonate sites drilled as part of what is now called the international ocean discovery program (IODP). The Svalbard and Fur sites are surface outcrops of shale-rich strata across the PETM.

The Earth has several mechanisms that help to keep the climate suitable for life to thrive. One of the main feedbacks that limits the amount of CO2 in the atmosphere is the weathering and erosion of rocks on land. The process of the water cycle breaking down silicate minerals into clays, and transporting the nutrients in rivers to the oceans, leads to the production of calcite shells and organic matter by marine life. When these animals die and sink, the carbon stored in their biomass and shells is buried in sediments. Over very long periods of time, on the order of tens to hundreds of thousands of years, this process locks away CO2 from the atmosphere and helps to keep the Earth in a temperate climate.

One part that is currently poorly understood is how fast weathering, erosion, and carbon burial can respond to big environmental changes, such as the current effects of human activities. One way to address this problem is to look to the deep past for a natural analogue. There are rare events in the geological record that showed large changes to the carbon cycle, resulting in periods of extreme global warming. The Paleocene-Eocene Thermal Maximum (PETM) is one such event, marked by the large release of carbon to the atmosphere. The PETM lasted up to 200,000 years and is marked by a rapid onset to warming, but also a relatively fast recovery. A critical question is can erosion rates be high enough to help the climate system to recover over a relatively short time interval?

A new method that can shed light on this process is the use of lithium isotopes as a proxy for weathering and erosion. Lithium (Li) occurs as two isotopes, 6Li or 7Li, with the difference between the number of neutrons in their nuclei. As these isotopes are the same element but have differing masses, the ratio between them (δ7Li) can change during certain reactions. For lithium, the δ7Li ratio in seawater is strongly affected by clay formation, which makes Li isotopes a powerful tracer for weathering and erosion. The new study was led by Philip Pogge von Strandmann (University of Mainz), and features Ella Stokke and Morgan Jones (CEED, University of Oslo).

This study looked at five localities, three limestone-rich open ocean sites, and two shallow continental localities now exposed in Svalbard and Denmark. All five records show a negative lithium isotope excursion (δ7Li) of -3 ‰, which suggests that the water cycle was significantly amplified during the PETM. Increased rainfall and heightened storm events caused an increase in both weathering and erosion. Computer modelling suggests that the increase in global erosion rates were between two to three times higher during the PETM compared to beforehand. The combined effects of increased ocean fertilization and rapid burial were likely to be the main driving force in ending the global warming event. These findings have important implications for understanding how the Earth system will respond to current and future climate changes. This includes the possibility of exploring ways to enhance this natural carbon capture and storage process as a way to combat climate change.