UiO The Faculty of Mathematics and Natural Sciences The Centre for Earth Evolution and Dynamics
Main navigation
Back to uio.no
Sub navigation Menu
About the centre > The CEED blog > 2021 > How to split Earth’s crust in two - from India to Turkey

An international team of geoscientists investigated the formation of an old subduction zone – where one plate dives under the other – in an area that extends from the eastern Mediterranean Sea to the Indian Ocean. They aimed to answer the question: What was the cause for splitting Earth’s crust along thousands of kilometers in an east-west direction while the large African plate was moving north towards Eurasia? They concluded in Nature Geoscience that the only explanation could be a mantle plume, an enormous upwelling of hot rock which led to the eruption of a supervolcano. Mantle plumes shaped the outer layer of the Earth frequently in geological times by forcing continents and oceans to break and by changing their courses. 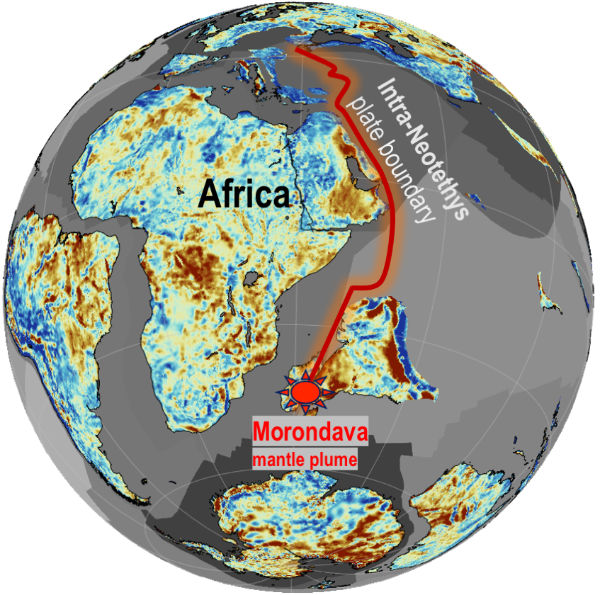 The researchers, led by Professor Douwe van Hinsbergen from Utrecht University, reconstructed the subduction zone across the entire length of 7500 km using geological relics. The results were published today in Nature Geoscience. ‘We’ve known for some time that this plate boundary must have existed but not how it was formed, the direction in which the plates moved towards each other and the force exerted on these’, says Van Hinsbergen. ‘And then we discovered this east-west movement, caused by rotation of India versus Africa around a pivot in the western Indian Ocean, initiating about 105 million years ago. But this could not have been caused by the existing movement of the plates, or by collisions.’ For instance, the area investigated exhibits no traces of continental collisions in that period. ‘And even if those had occurred, they would not have explained that east-west movement.’

The underlying cause was found – also literally– to lie in a mantle plume that during this period rose up under Madagascar and India when those continents were still adjacent to each other. Mantle plumes are large “upwellings” of hot rock that rise up from deep in the earth. If such plumes, which look a bit like mushroom clouds, reach the underside of the plates and spread out, then they weaken and often break the plate in two, and push the pieces apart, while at the same time volcanism occurs on a large scale. ‘The traces of that mantle plume can be found as flood basalts on both sides of the plate boundary, on Madagascar and in southwest India. Such flood basalts are the manifestation of a supervolcano that was fed by a mantle plume.’

However, the breakup of two continents does not yet make a subduction zone. Everything fell into place when Van Hinsbergen and his colleagues realised that the spreading out of the mantle plume could push plates towards each other elsewhere as well. The “keel” that hangs under continents plays an important role in that process. ‘Such a keel consists of old, cold and solidified rock that penetrates deeper into the earth’s mantle and keeps the continent more or less in its place. The team had to solve many puzzles before getting to the final conclusion. Firstly, they had to reconstruct the history of many sub-basins in the western Indian Ocean. Professor Carmen Gaina from the Center for Earth Evolution and Dynamics, University of Oslo used her expertise in marine geophysics to reveal how old oceans disappeared and new ones were created. In a separate study published several years ago, the researchers had already demonstrated that a mantle plume can push against such a continental keel and can accelerate plate movement. ‘But now, via computer models, we have demonstrated that the keel can also work as a pivot’, says co-author Bernhard Steinberger from the German Research Centre for Geosciences in Potsdam.

To the south of the pivot, Africa and India are moving away from each other across a mid-ocean ridge, but they are moving towards each other to the north of the pivot. Van Hinsbergen: ‘This scissor movement caused a fault from the Seychelles to Istanbul along which the subduction zone formed. That subduction zone is still producing earthquakes in Turkey and Cyprus today.’ Consequently, the research demonstrates that mantle plumes can give rise to plate tectonics. ‘This process makes clear that plate boundaries that move towards and away from each other can form as a result of, but at a great distance from the actual plume.’

The research of Van Hinsbergen and his colleagues contributes to unravelling the mechanisms that underlie plate tectonics. Geologists investigate those mechanisms because they are the underlying cause of earthquakes, volcanism, the formation of mountain ranges and of many ore deposits, such as those we need for the energy transition. Therefore, a better understanding of plate tectonics will also enable us to conduct more precise searches for a range of raw materials.

Text modified from the public release of the University of Utrecht.