The Wilson Cycle in Four Stages

The Centre for Earth Evolution and Dynamics is pleased to announce our series "The Wilson Cycle." The four videos follow CEED researchers to western Norway where they share insights into this fundamental process that explains the formation of oceans and mountains, and more. Every two weeks we release a new video below and via our YouTube channel. 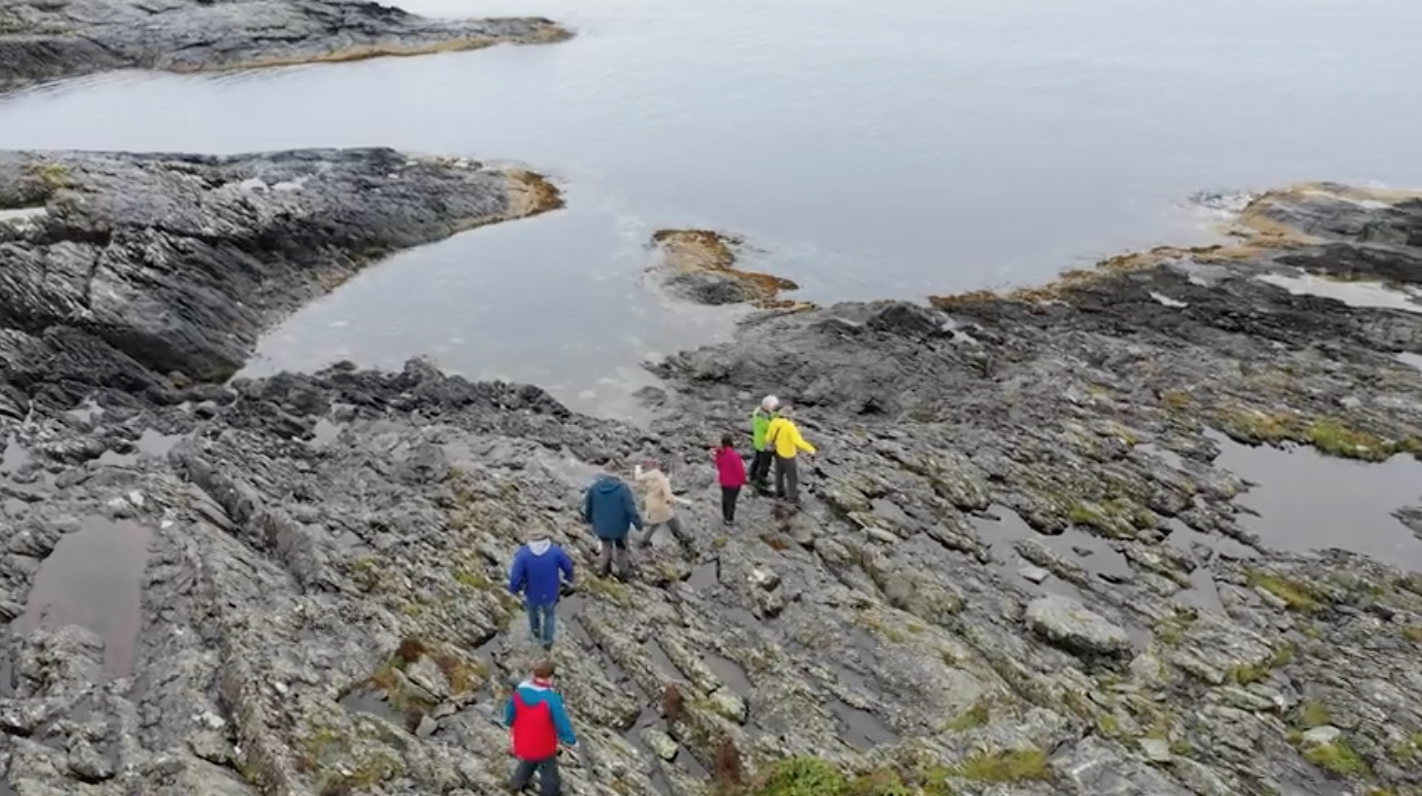 Join us to discover the Wilson Cycle, one of the most fundamental concepts in geology. The “Wilson Cycle” explains the process of orogeny, which related to the formation of the world's large-scale mountain belts by a series geological events. The various elements of Wilson Cycle (and the Supercontinent Cycle, more broadly) have underpinned and inspired many of the research undertaken over the last 10 years at CEED. The Wilson Cycle can be broadly documented across four stages. We commence with,

Stage-1: Rifting and Break-up of Continents; which continues with

Stage-2: Opening of large oceans by sea-floor spreading; and

Stage-3: Closure of major oceans by subduction and

Stage-4: which ends with mountain-building by continent-continent collision. The final stage eventually continues into late to post-orogenic collapse and Extension, which may, or may not be the precursor of a new Wilson Cycle.

The use of the name “Wilson Cycle” was inspired by John Tuzo Wilson's famous paper from 1966: 'Did the Atlantic Close and then Re-Open?'; which was published in the journal «Nature». In this seminal paper, Wilson asked the question and argued that the formation of the Lower Paleozoic Orogenic belts In Scandinavia, the British Isles and Ireland, East-Greenland and the Atlantic US and Canada, constituted by the Caledonian and Appalachian Mountain Belts, could be explained by formation and closure of a vast Ocean, which he referred to as the “Proto-Atlantic Ocean”. In his model the “Proto-Atlantic Ocean” had opened and closed as a predecessor to the present North Atlantic Ocean and Norwegian-Greenland Sea.

The term “Wilson Cycle”, was first used as a general model for orogeny by John F. Dewey and Kevin Burke to honour John Tuzo Wilson (1908-1993), as one of the world's pioneers of plate tectonics.

In the four film clips, recorded during a geotraverse across the South-Norwegian Caledonides, we showcase the geology to demonstrate how Wilson Cycle-tectonics produce recognizable, large-scale (geo-tectonic) rock-associations, which are characteristic of the 4 stages of the Wilson Cycle in orogenic belts world-wide.

The formation of the Caledonian-Appalachian Mountain-Belts were originally the inspiration for Wilson when he was asking the, at the time highly provocative and ‘outrageous’ question: 'Did the Atlantic Close and then Re-Open?'

In Clip 1 (released 10 June 2022): we look at some of the geological evidence for the rifting and breaking-up of the Late-Proterozoic supercontinent known as Rodinia. This continental break-up resulted in the formation of the palaeo-continents Baltica and Laurentia. The continued rifting formed wide and in-parts hyperextended passive continental margins along both Baltica and Laurentia, both facing the opening “Proto-Atlantic Ocean”, which presently, in the modern literature is named the “Iapetus Ocean”.

In Clip 2 (released 24th June): we have traversed west across the Caledonides in South Norway to look at the evidence for the former presence of oceanic crust that once was formed by sea-floor spreading within the Iapetus Ocean, which separated the two palaeo-continents Baltica and Laurentia. We look at deep-marine pillow-basalts and copper mineralisation in an ancient mine related to black-smoker-type hydrothermal activity during formation of the oceanic crust. These rocks and mineralisations are typically formed along spreading ridges in oceans and both represent evidence for the sea-floor spreading within the Iapetus Ocean.

In Clip 3 (coming 8th July!): we look at computer simulation of oceanic closure, island-arc and back-arc-basin formation by subduction and at the field-evidence for the initial intra-oceanic subduction-related formation of island-arc magmatism. We visit a large granodiorite formed by partial melting and intrusion in an island-arc above an intra-oceanic subduction zone. This island-arc magmatism took place in late Ordovician at 445 million years ago, shortly before the final closure of the Iapetus Ocean in the Middle Silurian. We study the evidence for how the granodiorite was exhumed to the surface during and after the Caledonian continental collision. We also look at the structural and stratigraphic evidence for how parts of the former Oceanic Crust, the Solund Stavfjord Ophiolite, was pushed up onto the margin of Baltica in the final stages of the closure of the Iapetus Ocean in the  Middle Silurian around 430 to 428 million years ago.

In Clip 4 (coming soon!):  we visit several localities with spectacular eclogites in Western Norway. These provide the evidence for the former deep burial and formation of a very thick, Himalayan type continental crust during the Caledonian Continental collision between Baltica and Laurentia. The association of exposed mantle-rocks and the eclogite facies minerals formed at high- and ultra-high pressure conditions at 405 to 395 million years ago during the burial under the Caledonian Mountains in Scandinavia, provide solid evidence  for the former presence of very thick orogenic lithosphere and consequently the former presence of very high, Himalayan-type mountains in Scandinavia. In the final stage of the Caledonian Wilson Cycle we find geological evidence for orogenic collapse, eduction, and formation of large-scale extensional detachments and discuss how this complicated set of observations can explain how these rocks, once deeply buried under the vast Caledonian mountains, now can be studied at the Earth's surface. The final part of our Caledonian Wilson Cycle story ends with a visit to a spectacular outcrop of a major Post-Caledonian Normal Fault, the Lærdal-Gjende Fault, where we discuss the end of the Caledonian Wilson Cycle and discuss the initiation of a new, as witnessed by the renewed continental break-up and oceanic opening associated with the present-day North Atlantic Ocean and the Norwegian-Greenland  Sea.

The Centre for Earth Evolution and Dynamics (CEED) at the University of Oslo (UiO), Norway.  All videos are released under the following license: Attribution-NonCommercial-NoDerivatives 4.0 International (CC BY-NC-ND 4.0) https://creativecommons.org/licenses/by-nc-nd/4.0/

Professor Torgeir B. Andersen (CEED) and his former PhD students/Post Doc at CEED, Dr Hans-Jørgen Kjøll (now at IG-UiO) and Dr Johannes Jakob (now at NGU) guide us through the geotraverse and explained details of the geological observations.

Dr Valentina Magni (CEED) shows and explains some computer simulations to illustrate elements of Wilson Cycle Tectonics, such as subduction and Island-arc formation and eduction.

Dr Dougal Jerram (CEED) is the narrator, asks all the important questions and introduces and summarise explanations underway.

Assistant Professor Owen Anfinson (Sonoma State University, US.A) helped with skilful drone-piloting under the instruction of main photographer Andrew Blix, who together with Dougal Jerram have edited and produced the final four clips of our Wilson Cycle movie.

Norwegian Research Council's financial support to CEED and the Fri-Nat Project “Hyper-extension along the Pre-Caledonian margin of Baltica” together with the INTPART NOR-R-AM and NOR-R-AM2 "Changes at the Top of the World through Volcanism and Plate Tectonics: Arctic Norwegian-Russian-North American collaboration" project financed the film project.

SGC (Sunnfjord Geo-Centre) with Einar Alsaker is thanked for help and guidance during visit to the Staveneset copper mine. Knutholmen A/S w/Svein Fosse provided the boats used during filming.

We hope you enjoy the series!

Link to the series on CEEDs YouTube channel: https://youtube.com/playlist?list=PLu_DCJwCuJPpiITgDQfN6pX09ZkagnVpx