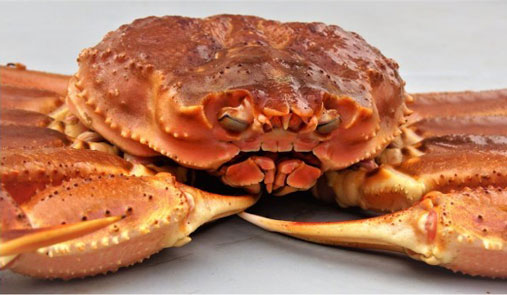 Snow crab (Chionoecetes opilio) are large crustaceans (>10cm) that feed on other crustaceans like crabs, and snails on and within the sea floor (Fig. 1). In recent decades the native habitat of the snow crab has expanded from the Northern Pacific and North western Atlantic into the Barents and Kara Seas. The snow crab population has increased rapidly in both distribution and abundance across the Barents Sea.

The establishment of a large marine crustacean to the marine community could impact the entire Barents Sea ecosystem, through interactions with other species and competition for prey and resources.

The Barents Sea is home to several valuable fisheries, e.g. cod (Gadus morhua), capelin (Mallotus villosus) and red king crab (Paralithodes camtschaticus), and it is important for management to know how the snow crab’s expansion may impact these resources.

In our study we explore the potential for cod predation in structuring snow crab distribution and abundance in the Barents Sea. We use a unique long 35 year cod diet dataset (Holt et al. 2019; Townhill et al. 2021) to quantify how the snow crab establishment is reflected in the cod diet.

In recent years, the distribution of snow crab has shifted in a more northeasterly direction (Fig. 3).

We find that snow crab represents a new prey item food cod in the Barents Sea and has rapidly increased within cod diet since 2003. The increased proportion of snow crab in the cod diets over time is consistent with the increase in population also observed in snow crab fisheries landings in the Barents Sea. We suggest that cod has the potential to regulate the snow crab expansion and population increase. Furthermore, the use of such a comprehensive stomach content database (Townhill et al. 2021) represents a valuable resource in monitoring the expansion of newly established species such as snow crab. Thus we find that cod can indeed be utilized as a biological sampling tool together with other monitoring programs.

For more information and further detail please see the full scientific article and literature below.