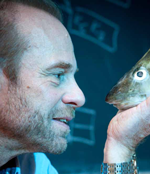 I have been the Chair of CEES since the end of September 2018.

My research has dealt with quite diverse aspects of evolutionary genetics and genomics. A main theme in my work relates to the genetic forces (both ongoing and historical) acting upon populations, and how the genetics relates to ecological and evolutionary processes. In this context, issues such as phenotypic plasticity, selective forces and epigenetic phenomena are of particular interest.

Essential ingredients in my interdisciplinary approach are genomics, bioinformatics, statistics and phylogeny, combined with evolutionary and ecological thinking. Through this, I aim to contribute to bridging the gap between organism-oriented research (evolutionary and ecological research), and genomics/molecular biology (phenotype-genotype issues).

I have worked on many biological systems ranging from cyanobacteria and protists to higher plants, fishes and mammals. Currently my research group focuses on bacteria – particularly cyanobacteria – and several protist and algal groups. The protist research is driven by a wish to understand the processes shaping such “alien” genomes –including endosymbiosis, gene transfer and protistt phylogenomics. From a large-scale phylogenetic viewpoint Dinoflagellates, Chromista, Rhizaria and some groups of deep branching unikont protists are my favorites. Another favorite group – Cyanobacteria being the key organisms in evolution of many protist groups and the most successful group of organisms throughout the evolutionary history – are being investigated at the comparative genome level and for their non-ribosomal peptide syntethases.

A major achievement has been the sequencing of the Atlantic cod (Gadus morhua) genome and the implications for our understanding of the vertebrate immune system. (Star et al. Nature 2011).

The evolution of the immune system in codfishes and other teleosts has been further investigated by experimental approaches and by complete genome sequencing of more than 100 species – and the results suggest that immunological innovation is correlated with high speciation rates (Malmstrøm et al. Nature Genetics 2016, and  Solbakken et al.  Proceedings of the Royal Society B 2017). Further, population genomics of Atlantic cod and salmon is studied in a large project funded with 40 MNOK from the Research Council of Norway (RCN) by whole genome sequencing of thousands of individuals. The results from Atlantic cod have so far revealed a highly unusual sex locus (Star et al. Scientific Reports 2016) that the genomic divergence between stationary and migratory cod is caused by a few large non-recombining genomic regions (Berg et al. Scientific Reports 2016, 2017, Star et al. PNAS 2017).