This week we will discuss what are the rate-limiting factors for the establishment of new species. In this regard, we will read a recent paper by Trevor Price and colleagues on the factors determining the rate of speciation in Himalayan song birds. The paper is entitled "Niche filling slows the diversification of Himalayan songbirds" and was recently published in Nature. The findings by Price et al. suggest that it is the rates at which new niches are created and occupied that limits diversification, not the rate at which new species form through reproductive isolation. 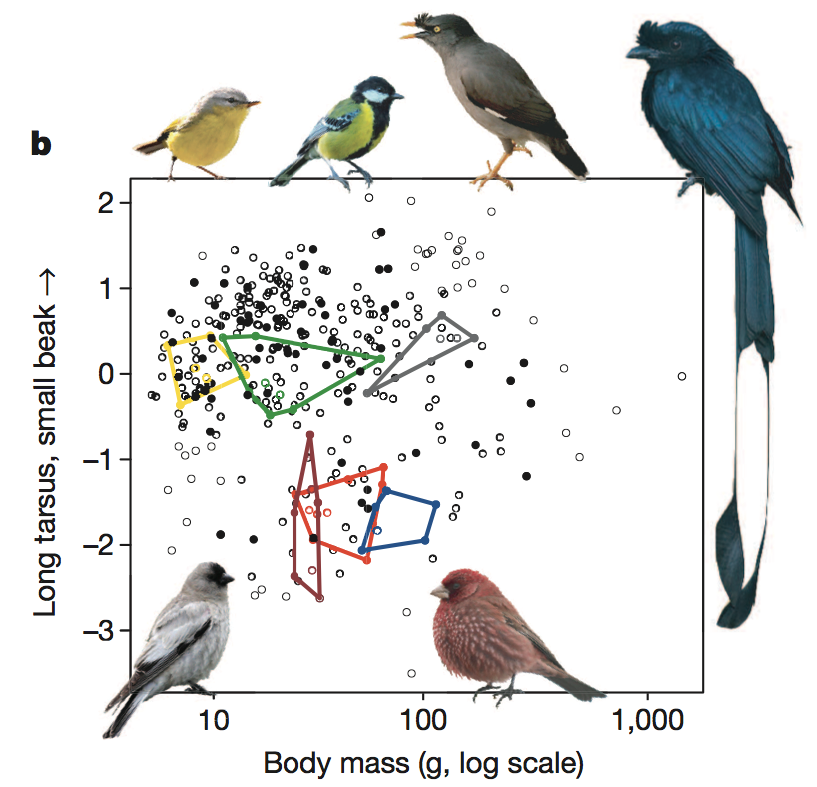 Speciation generally involves a three-step process—range expansion, range fragmentation and the development of reproductive isolation between spatially separated populations. Speciation relies on cycling through these three steps and each may limit the rate at which new species form. We estimate phylogenetic relationships among all Himalayan songbirds to ask whether the development of reproductive isolation and ecological competition, both factors that limit range expansions, set an ultimate limit on speciation. Based on a phylogeny for all 358 species distributed along the eastern elevational gradient, here we show that body size and shape differences evolved early in the radiation, with the elevational band occupied by a species evolving later. These results are consistent with competition for niche space limiting species accumulation. Even the elevation dimension seems to be approaching ecological saturation, because the closest relatives both inside the assemblage and elsewhere in the Himalayas are on average separated by more than five million years, which is longer than it generally takes for reproductive isolation to be completed; also, elevational distributions are well explained by resource availability, notably the abundance of arthropods, and not by differences in diversification rates in different elevational zones. Our results imply that speciation rate is ultimately set by niche filling (that is, ecological competition for resources), rather than by the rate of acquisition of reproductive isolation.