This thursday, at the Speciation Journal Club, we will discuss a paper on Hybridization and Genome Stabilization by Schumer et al. 2016 (Molecular Ecology) 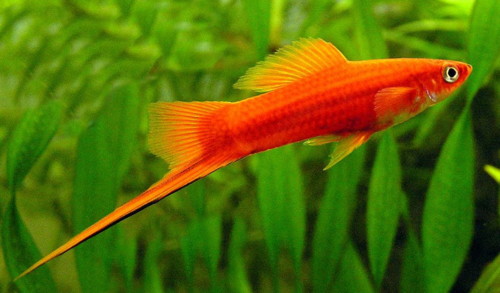 Ancient hybridization and genomic stabilization in a swordtail fish

A rapidly increasing body of work is revealing that the genomes of distinct species often exhibit hybrid ancestry, presumably due to post-speciation hybridization between closely related species. Despite the growing number of documented cases, we still know relatively little about how genomes evolve and stabilize following hybridization, and to what extent hybridization is functionally relevant. Here we examine the case of Xiphophorus nezahualcoyotl, a teleost fish whose genome exhibits significant hybrid ancestry. We show that hybridization was relatively ancient and is unlikely to be ongoing. Strikingly, the genome of X. nezahualcoyotl has largely stabilized following hybridization, distinguishing it from examples such as human-Neandertal hybridization. Hybridization-derived regions are remarkably distinct from other regions of the genome, tending to be enriched in genomic regions with reduced constraint. These results suggest that selection has played a role in removing hybrid ancestry from certain functionally important regions. Combined with findings in other systems, our results raise many questions about the process of genomic stabilization and the role of selection in shaping patterns of hybrid ancestry in the genome.