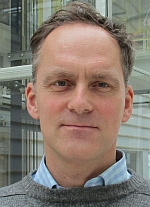 I am interested in the dynamics that govern transport processes in the ocean, from hydrodynamic instability and mesoscale ‘eddies’ to the large-scale currents that cross the various ocean basins. I focus mostly on high northern latitudes, i.e. the northern North Atlantic and the Arctic Ocean, since we currently lack good text book theories for the flows in these regions.

One very important aspect controlling flows in the Arctic, and at high latitudes in general, is the bottom topography. I spend much time studying its impacts on instability and mesoscale flows as well as on large-scale currents.

I received my BASc and MSc from the University of British Columbia and my PhD from the University of Bergen. After a postdoc position at UiO, studying Rossby wave break-up in the ocean, I worked a year and a half at the Norwegian Institute of Water Research, collaborating with marine biologists on studies of wave and current effects on the marine ecosystem.

I also worked eight years with ocean modelling at the Norwegian Meteorological Institute, then a year and a half as associate professor at the Universtiy of Bergen, before taking on a full professorship at the University of Oslo. I have also been subject editor for the multi-disciplinary journal Polar Research for four years.

My research has involved and continues to involve collaboration with oceanographers, meteorologists and marine biologists in Norway and abroad.