In this project we will utilize the growing database of global satellite remote sensing observations, along with advanced signal processing techniques, to make much improved scale estimates of a variety of dynamical phenomena in the Earth system. 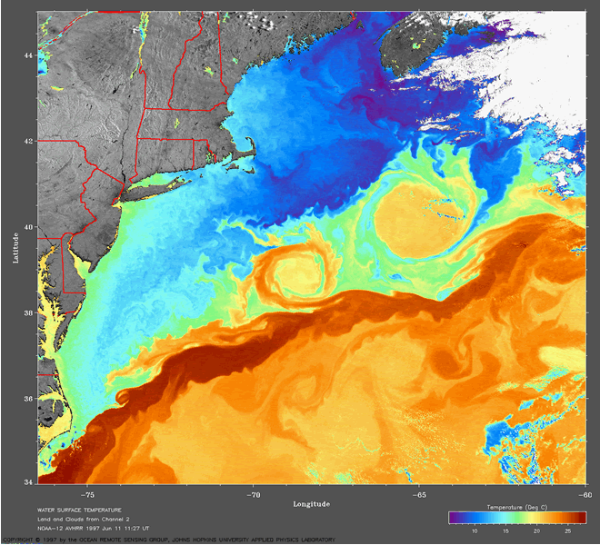 Dynamical processes in the Earth system can be classified and understood in terms of their spatial and temporal scales. Turbulent eddies in the ocean and atmosphere, in particular, have scales that reflect the instability mechanisms that created them. The energy levels of eddies of various scales, in turn, determine the strength of turbulent transport of momentum, energy and tracers by the turbulence.

Most turbulence in the climate system is still unresolved by the numerical grids of today's Earth Systems Models (ESMs) that are used to make predictions of past and future climate. So turbulent transport must be parametrized. But current parametrizations are often overly simplistic, being the source of large model biases. Improving the situation will require a much better understanding of how the ‘energy spectrum’ of turbulence changes in space and time, i.e. under varying environmental conditions.

In this project we will utilize the growing database of global satellite observations, along with advanced signal processing techniques, to make much improved scale estimates of a variety of turbulent phenomena in both ocean and atmosphere. The focus will be on macroturbulent processes that are large enough for satellites to see and therefore typically also influenced by Earth’s rotation.
We will utilize wavelet techniques that allow for an optimal ability to estimate both scale and location of a given process (as opposed to Fourier techniques which integrate out any information of location). So, essentially, we will ask: what are the dominant scales of various turbulent phenomena in different spatial locations and at different times? The wavelet filtering also allows us to study nonlinear energy exchanges between scales, giving information about the chain of events leading from initial instability to fully-developed and equilibrated turbulence.

We will apply the methodology to satellite-observed macroturbulent eddies in the ocean and atmosphere, focusing on processes at high latitudes. The new estimates will be used to advance our fundamental understanding and theoretical models of the phenomena at play. On a very practical level, the work will contribute directly towards improved parametrizations of turbulent processes in the Norwegian Earth System Model (NorESM).