The Pharmacy building was the first of the university's buildings to be raised at Blindern, and the newly founded University School of Pharmacy was thereby opened in fashionable facilities in January 1932. 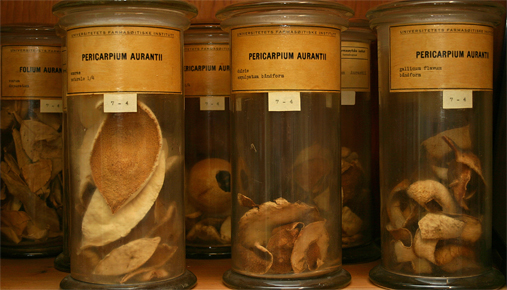 Jars with Pericarpium aurantii, bitter orange peel, from our collection of herbal drugs.

More than 250 years passed from the time it was first decided to offer pharmaceutical education in Denmark-Norway and the establishment of a separate university degree programme in pharmacy in Norway.

The newly enrolled pharmacy students at the time were given a basic education in the natural sciences from the departments of chemistry and physics, and after completing their practicum training in a pharmacy, they were able to concentrate on the specific pharmaceutical subjects. This differed greatly from previous pharmaceutical studies because the educational programme was detached from the pharmacies.

The School of Pharmacy, in addition to providing teaching, was also to conduct research and development in the fields of pharmacy, pharmaceutical chemistry and pharmacognosy.

The School of Pharmacy has revised its curriculum at regular intervals in pace with developments within both the natural sciences and medicine. The curriculum is also affected by the great changes that the role of pharmacist has gone through in the course of these years.

The School of Pharmacy is the sole educational institution in Norway that has also established a separate Master's degree programme in clinical pharmacy.

Milestones in the history of the School of Pharmacy:

1930 – appointment of UiO's first professor of Pharmacy and Pharmacognosy

1932 – Opening of The School of Pharmacy

1957 – Department of Biology (later the Dept. of Pharmacology) is established

1968 – A new curriculum including the thesis at second degree level is introduced. The degree programme is expanded to encompass 5 years.

1985 – Teaching in Social Pharmacy is introduced.

1990 – A new curriculum with greater emphasis on therapy. Pharmacotherapy and Cellular Biology are introduced as separate subjects. Problem-based learning as a teaching method is also implemented in this curriculum.

2003 – A new curriculum is introduced, with focus on pharmacy from the first day of study. Teaching in the various subject areas is integrated in larger thematic topics.

2008 – The first candidates for the Master's in Pharmacy graduate.

2009 – The Master's degree programme in Clinical Pharmacy is launched.

2012 - The first candidates for the Master's in Clinical Pharmacy graduate.