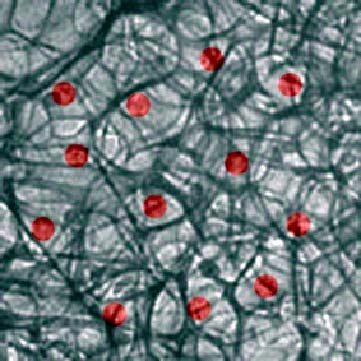 Micro particles in a polymer network

Naltrexone is a well known opioid antagonist. During naltrexone treatment relapse rates to opioid use are minimal and overdose mortality for all practical purposes prevented. The clinical usefulness, however, is limited by high attrition. Except for highly motivated patients such as probationers that might prevent their return to prison by complying with naltrexone treatment and physicians and other professionals at risk of loosing their license, the benefits of naltrexone seem to be marginal beyond a short post treatment period. Two strategies seem promising in order to secure long-term naltrexone treatment. One is community reinforcement and the other is use of sustained release formulations. Several different implants have been produced, but all lack proper clinical trials and so far (2009), none of the implant formulations have been registered for clinical use.

An injectable depot formulation would increase therapeutic feasibility. A depot developed in US has been tested, but found to have too short duration. Due to the recent advances in polymer technology it is our opinion that the aim may be achieved by two different approaches. One is an in situ biodegradable gelling system corresponding to an implant, but without the need for surgical procedures. In addition, since the gel is formed within the body, patient discomfort from tangible lumps is minimized. The other approach is based on injectable microcapsules able to withstand elimination from the body for the required time. However, due to the large surface are of such particles, sufficiently low release rates are difficult to achieve. This project will study the possibilities of combining these two approcehes into a formulation that meets the aim of the project.

By designing a thermoresponsive polymer system, the depot formulation can be injected as a solution, and then form a gel at body temperature. Our goal is to find such a system where the gel network hinders the movement of the naltrexone microparticles so that naltrexone can be released over the requiresd period of 5-6 months, either by slowly diffusing out of the polymer network, or by a slow degradation of the polymer network. The other part of the project is formulation of microparticles with appropriate properties. By separating the mechnaism for reduced release (particles) from the mechanism for in situ gelation (polymer) we hope to be able to meet the requirements.

This project is a cooperation between  School of Pharmacy, Dept. of Chemistry, SERAF  and Norwgian Institute of Public Health