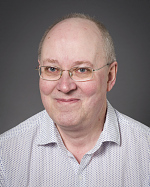 Engineer (electronics) from Narvik in 1979. Then after 3 years in the Navy I started the studies at UiO. Cand. Scient. in Physics. Nearly 4 years with salary from NAVF/NFR before permanent position at UiO. Worked on the CERN-projects PS-179 (anti-protons on light nuclei) and WA-102 (450 GeV/c proton-proton collisions) and there after on the DESY-project Hera-B (920 GeV/c protons on different elements).