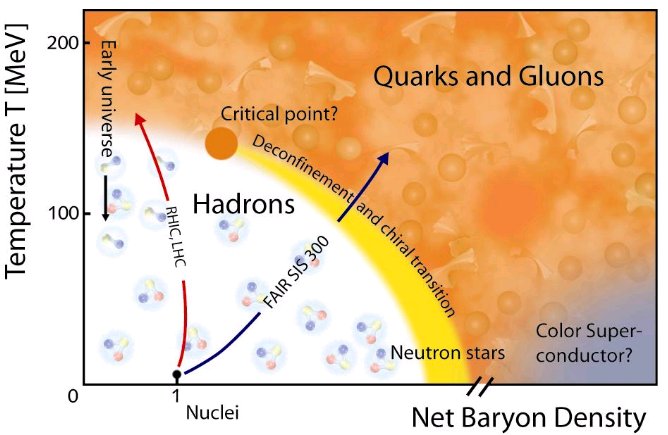 The main objective of the HENP project is the study of the behaviour of nuclear matter under extreme temperatures and densities, in particular the phase transition from hadronic matter to Quark-Gluon Plasma, which takes place at a temperature of about 2000 billion degrees.  Such a plasma, consisting of free quarks and gluons, existed for a fleeting moment at the birth of the Universe, about 1 microsecond after the Big Bang.  Today this type of primordial matter can be recreated in the laboratory through ultra-relativistic heavy-ion collisions.  In addition to providing this glimpse of the behaviour of matter immediately after the Big Bang, the project addresses other fundamental questions within Quantum Chromo Dynamics (the theory of the strong interaction) , like the mechanism confining quarks in hadrons, the generation of mass in the strong interaction, and the true nature of vacuum. 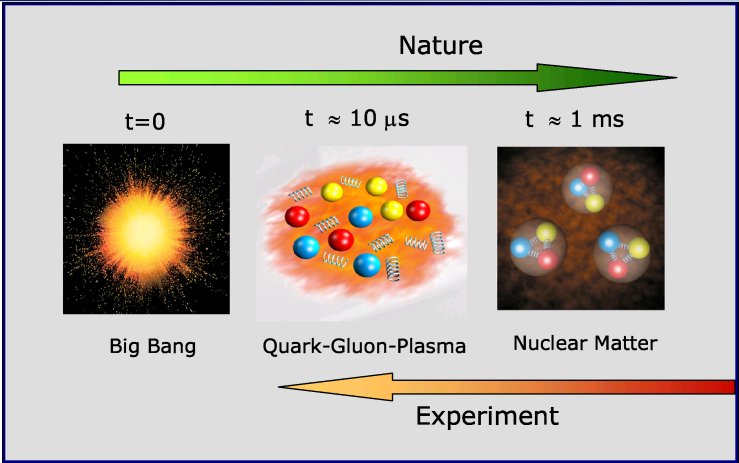 Figure 2: At the LHC, primordial matter is re-created through ultra-relativistic heavy-ion collisions.
The HENP project uses the most powerful particle accelerator of the world, LHC at CERN, and the dedicated heavy-ion experiment ALICE (A Large Ion Collider Experiment) to produce and study the quark-gluon plasma. After LHC Run-1 (2009-2013) lead-lead collisions at center-of-mass energies of 2.76 TeV per nucleon pair have revealed a hot and dense, strongly interacting plasma behaving nearly like an ideal, non-viscous liquid, showing a complex hydrodynamic expansion pattern.  We observe clear indications that quarks and gluons, carriers of the strong colour charge, lose energy while traversing a medium consisting of free colour charges.
LHC Run-2 (2015-2018) is expected to provide data where the statistical quality is improved by an order of magnitude, at center-of-mass energies per nucleon pair doubled compared to Run-1. The ALICE physics programme for this period aims at a precise quantitative characerization of the properties of the Quark-Gluon Plasma, now to a large extent utilizing rare tomographic probes. Quarkonia, heavy bound quark-antiquark systems, exhibit a complex and interesting behaviour in the plasma and give important information on the transport and thermalization of heavy quarks, and on the mechanisms responsible for hadron formation.  Other interesting measurements include energy distributions of and angular correlations among hadrons with high transverse momenta, and their modifications in a medium with free colour charges.  Detailed studies of the anisotropic explosive expansion of the hot plasma offer knowledge of the bulk properties of the produced matter. In relativistic heavy-ion collisions photons are produced through all stages of the collision process, and in particular the hot Quark-Gluon Plasma emits a thermal photon spectrum probing the source temperature. 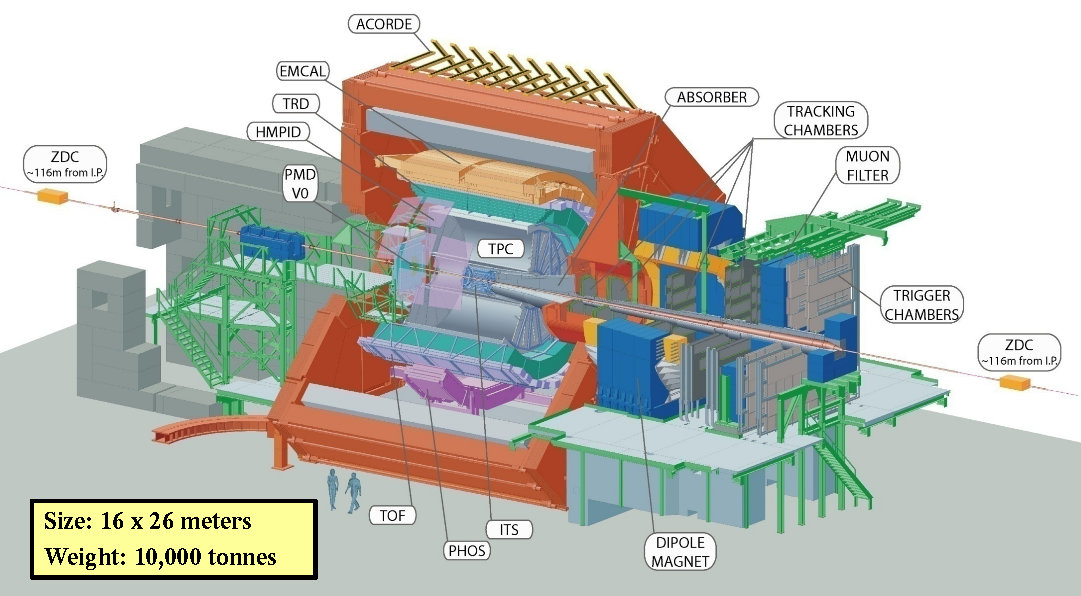 Figure 3: The ALICE detector at the LHC

In addition to physics analysis, the ALICE-Oslo group is involved in instrumentation projects for two ALICE subdetectors. The group has a long history of contributing to the photon spectrometer PHOS, in particular to the read-out electronics.  Today most of the instrumentation activity is focused on the main tracking detector for charged particles, the Time Projection Chamber (TPC), where the Norwegian ALICE groups participate in a two-stage upgrade of the readout electronics, in order to handle and take advantage of the increased LHC luminosity expected for upcoming run periods, and increase the sensitivity to rare physics signals.

A more comprehensive and detailed description of the physics programme and interesting phenomena in the Quark-Gluon Plasma is found on the homepages of the ALICE-Oslo group.

The HENP project is a major part of the Norwegian CERN related research program financed by the Norwegian Research Council. LHC commenced physics running under the six-year funding period 2006-2011, ending December 2011. The first four-year period of the present CERN related research program (2012-2019) started in January 2012.  The main activities of the HENP project are associated with the ALICE experiment at LHC and include physics analysis, instrumentation and GRID computing. Project members have also been involved in the BRAHMS experiment at RHIC, Brookhaven, in medical physics and space physics. The project partners UiO, UiB, HiB and HBV contribute with permanent staff and PhD students. Postdoctoral fellows, hardware and computing expenses plus operation of the ALICE experiment are financed by the Norwegian Research Council.

Public pages of the ALICE experiment