The goal of HEPP is to extend the frontiers of physics knowledge using the advanced technology of the world's largest and highest energy particle accelerator, the LHC, and, among others, the world's largest particle detector, ATLAS, to discover the last missing building block of the Standard Model of elementary particles, the Higgs boson, and identify the new physics which may be expected in a previously unexplored energy regime, the TeV scale.

Public results from the ATLAS Experiment 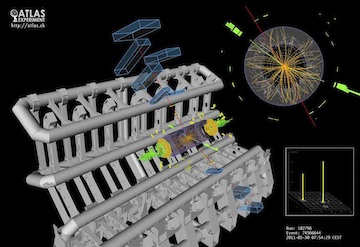 Proton-proton collision leading to two Z particles: one Z decays to two muons, the other to two electrons. This is one of the Higgs candidates. Photo ATLAS.

The HEPP project is part of the Norwegian CERN-related program, funded by the Research Council (RCN). During the successful 6-year period 2006-2011, although the main activity was  ATLAS, project members were also involved in theoretical work related to and/or relevant for LHC physics, in software and distributed (Grid) computing, in detector upgrade activities, as well as in a vast education & outreach program towards young students and media. The first 4-year period of the current program (2012-2019) successfully ended in December 2012 and the second period started in January 2016, with main emphasis the ATLAS experiment. The partners UiO, UiB and NTNU/HiG contribute with permanent staff members and PhD students. Post-docs are funded by RCN, as well as hardware, computing and operation of ATLAS. The HEPP project collaborates among others with NorduGrid, USIT, NeIC, Uninett Sigma 2, SDI, SINTEF.