Organization navigation
Home UiO The Faculty of Mathematics and Natural Sciences Department of Physics
UiO UiO University of Oslo Department of Physics The Faculty of Mathematics and Natural Sciences
Main navigation
The University of Oslo is launching new design on our web pages, and you may experience switching between old and new design in some time.
Sub navigation
Research > Research projects from A to Z > High energy particle physics > News

On 4 July, 2012, the ATLAS experiment presented a preview of its updated results on the search for the Higgs Boson. The results were shown at a seminar held jointly at CERN and via video link at ICHEP, the International Conference for High Energy Physics in Melbourne, Australia, where detailed analyses will be presented later this week. At CERN, preliminary results were presented to scientists on site and via webcast to their colleagues located in hundreds of institutions around the world. 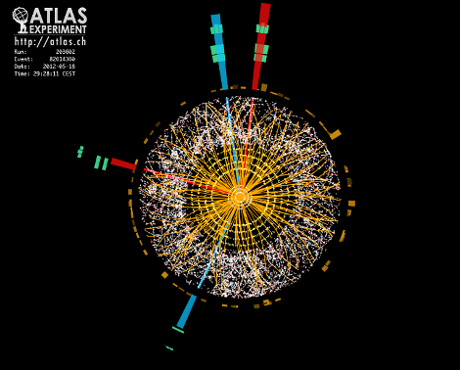 “The search is more advanced today than we imagined possible,” said ATLAS spokesperson Fabiola Gianotti. “We observe in our data clear signs of a new particle, at the level of 5 sigma, in the mass region around 126 GeV. The outstanding performance of the LHC and ATLAS and the huge efforts of many people have brought us to this exciting stage. A little more time is needed to finalize these results, and more data and more study will be needed to determine the new particle’s properties.”

The Higgs Boson is an unstable particle, living for only the tiniest fraction of a second before decaying into other particles, so experiments can observe it only by measuring the products of its decay. In the Standard Model, a highly successful physics theory that provides a very accurate description of matter, the Higgs Boson is expected to decay to several distinct combinations of particles, or channels, with the distribution among the channels depending on its mass. 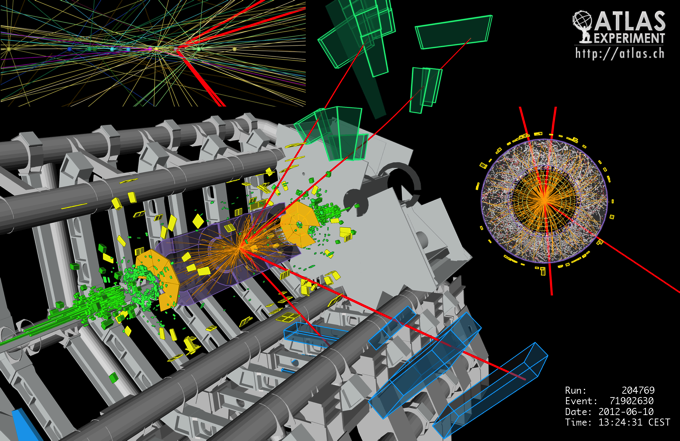 ATLAS concentrated its efforts on two complementary channels: Higgs decays to either two photons or to four leptons. Both of these channels have excellent mass resolution; however, the two-photon channel has a modest signal over a large but measured background, and the four-lepton channel has a smaller signal but a very low background. Both channels show a statistically significant excess at about the same place: a mass of around 126 GeV. A statistical combination of these channels and others puts the significance of the signal at 5 sigma, meaning that only one experiment in three million would see an apparent signal this strong in a universe without a Higgs.

The current results are an update on previous analyses shown at a CERN seminar last December and published at the beginning of this year. The December results, based on 7 TeV proton collision data collected in 2011, limited the mass of the Higgs Boson to two narrow windows in the range between about 117 GeV and 129 GeV. A small excess of events above the expected background was seen by both ATLAS and CMS at around 126 GeV, about the mass of an iodine atom. 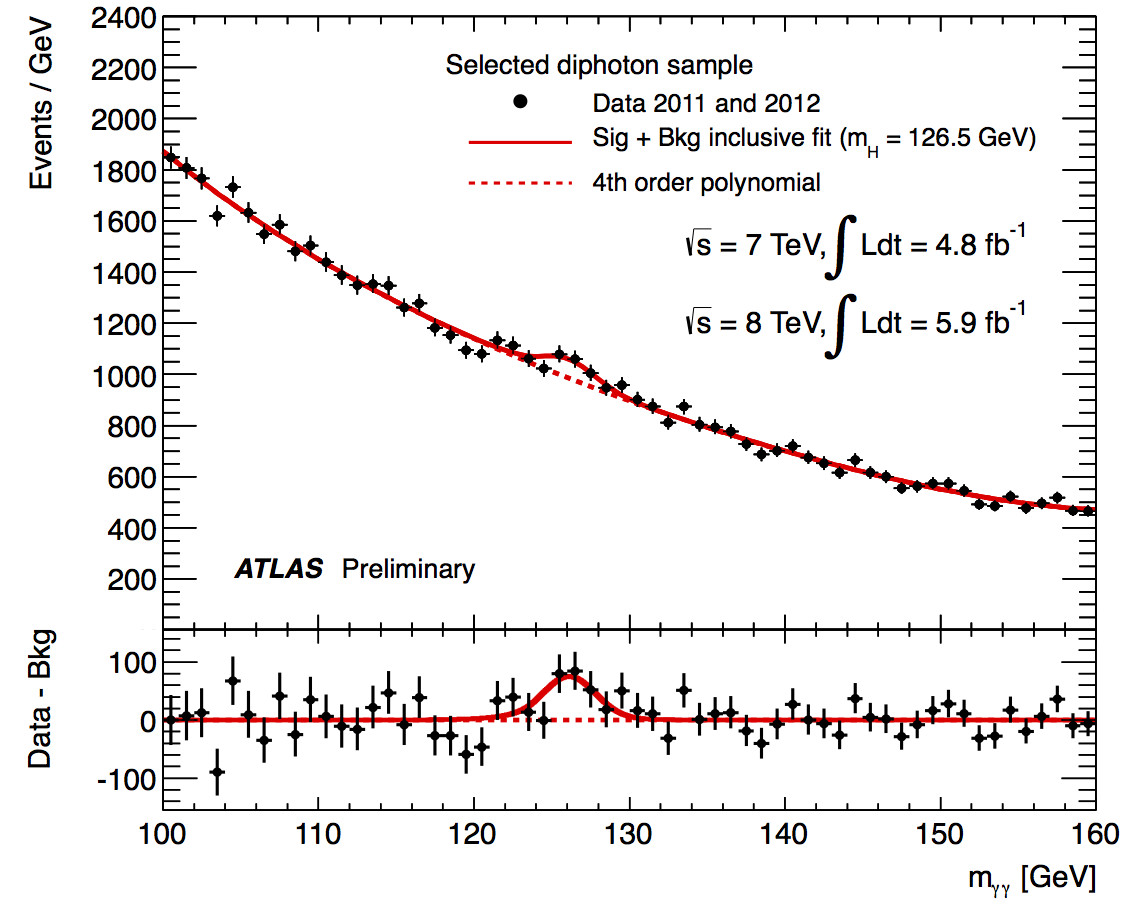 Figure 3. Mass distribution for the two-photon channel. The strongest evidence for this new particle comes from analysis of events containing two photons. The smooth dotted line traces the measured background from known processes. The solid line traces a statistical fit to the signal plus background. The new particle appears as the excess around 126.5 GeV. The full analysis concludes that the probability of such a peak is three chances in a million.

The next steps for ATLAS, the LHC and the high-energy physics community are to measure the properties of this particle and compare these measurements with the predicted properties of the Higgs Boson. Already some of these properties match the predictions: the fact that it is seen in the predicted channels and at a mass favoured by other, indirect measurements. In the weeks and months ahead, ATLAS will better measure these properties, enabling a clearer picture to emerge about whether this particle is the Higgs Boson, or the first of a larger family of such particles, or something else entirely. 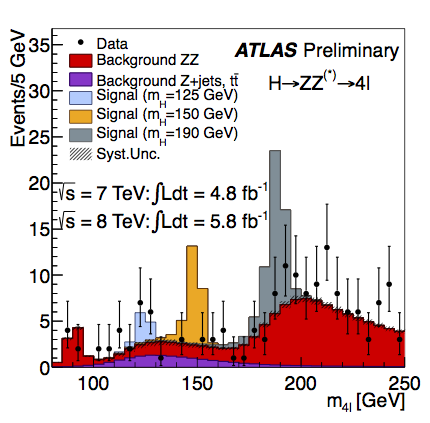 Figure 4. Mass distribution for the four-lepton channel. The search with the purest expected signal is done by examining events with two Z bosons that have decayed to pairs of electrons or muons. In the region from 120 to 130 GeV, 13 events are seen where only 5.3 were expected. The complete analysis concludes that the probability of such an excess would be three times in ten thousand if there were no new particle.

The 2012 data set comes from proton collisions with an increased centre of mass energy of 8 TeV and includes more data (collected in only three months) than was collected in all of 2011. This rapid accumulation of data was possible thanks to the outstanding efforts of the LHC accelerator group. The data set presented at the seminar comes from approximately one quadrillion (million billion) proton collisions. 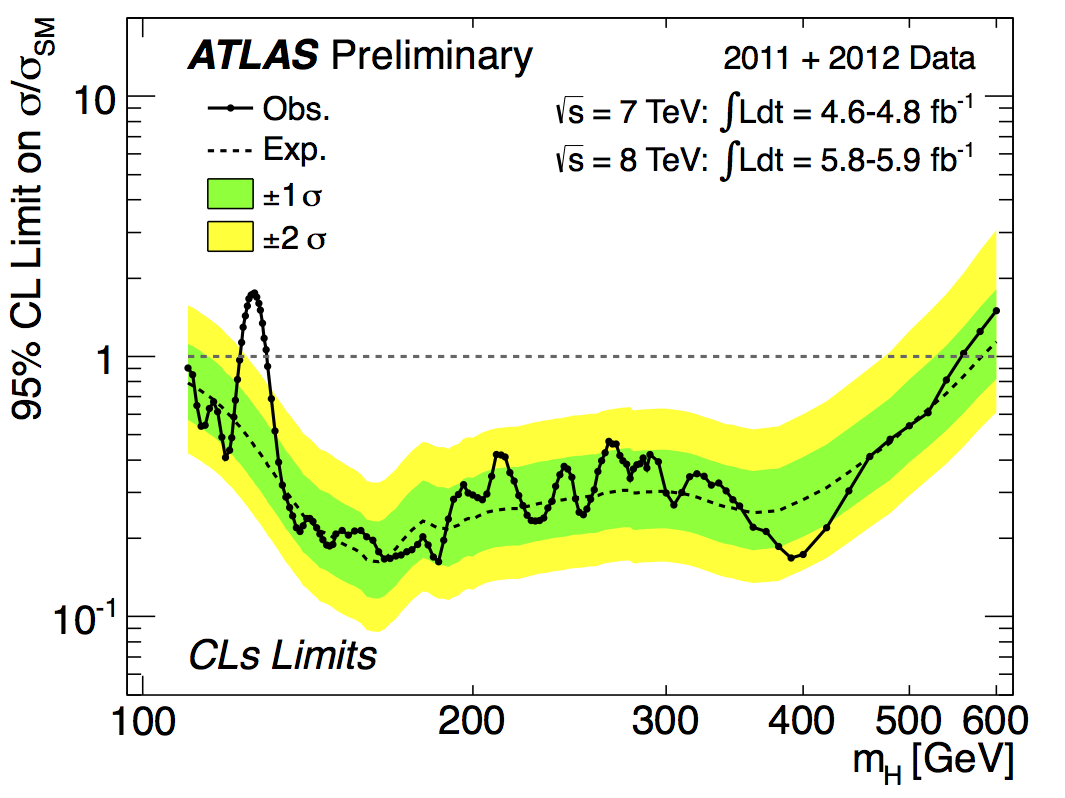 Figure 5. Experimental limits from ATLAS on Standard Model Higgs production in the mass range 110-600 GeV. The solid curve reflects the observed experimental limits for the production of a Higgs of each possible mass value (horizontal axis). The region for which the solid curve dips below the horizontal line at the value of 1 is excluded with a 95% confidence level (CL). The dashed curve shows the expected limit in the absence of the Higgs boson, based on simulations. The green and yellow bands correspond (respectively) to 68%, and 95% confidence level regions from the expected limits. Higgs masses in the narrow range 123-130 GeV are the only masses not excluded at 95% CL.

The ATLAS detector has performed remarkably well, even under the more difficult beam conditions of 2012, and has, with nearly full efficiency, collected high quality data for this search. Powerful computing provided by the worldwide LHC Computing Grid was essential for the reconstruction and analysis of the data.

The LHC is expected to provide ATLAS with double the data again by the end of the 2012, before the beginning of a long shutdown to upgrade the accelerator. When the machine starts up again toward the end of 2014, it will operate at nearly twice its current energy.

The new 2012 data and the data generated by the improved accelerator will allow scientists to address the questions about the Higgs prompted by today’s announcement as well as other questions fundamental to our knowledge of nature. 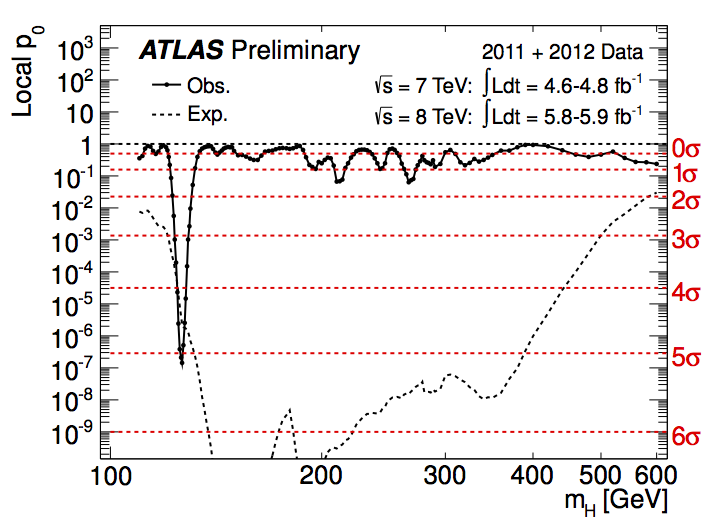 Figure 6. The probability of background to produce a signal-like excess, for all the Higgs boson masses tested. At almost all masses, the probability (solid curve) is at least a few percent; however, at 126.5 GeV it dips to 3x10-7, or one chance in three million, the '5-sigma' gold-standard normally used for the discovery of a new particle. A Standard Model Higgs boson with that mass would produce a dip to 4.6 sigma.

ATLAS is a particle physics experiment at the Large Hadron Collider (LHC) at CERN. The ATLAS detector is searching for new phenomena in the head-on collisions of hadrons of extraordinarily high energy. ATLAS is studying the basic forces that have shaped our Universe since the beginning of time and that will determine its fate. Among the possible unknowns are the origin of mass, extra dimensions of space, the unification of fundamental forces, and evidence for dark matter candidates in the Universe.

At the time of writing, the ATLAS Collaboration comprises 3000 physicists from 176 institutions located in 38 different countries around the world. More than 1000 PhD students are involved in the operation of ATLAS and in the analysis of its data.

Information about ATLAS can be found on the public web site [http://atlas.ch].

Other sources of information