UiO The Faculty of Mathematics and Natural Sciences Department of Physics
Main navigation
Back to uio.no
Sub navigation Menu
Research > Research projects from A to Z > ZPATH > Z-path for High Schools > Z-path for high school

The International Particle Physics Outreach Group (IPPOG) has developed, for the International Masterclasses (IMC), an educational activity that brings the excitement of cutting-edge particle physics research into the classroom. The ATLAS group at the University of Oslo has developed the Z-path, a powerful and popular educational tool allowing high-school students to learn about particle physics, master concepts such as 'event' and 'statistics', and search for new phenomena using real LHC proton-proton collision data.

By studying collision events students use the invariant mass technique to identify short-lived particles that decay into 2 leptons, whose properties are recorded by the detector. A few properties of some particles, such as mass and lifetime, can be inferred. The students distinguish between the Z boson - one of the mediators of the weak force and other particles made of quarks. Furthermore, they apply the same technique to search for new particles, such as the Z’ - the mediator of a new hypothetical force. The ambition to bring important LHC discoveries to the “classroom” is realized using the discovery of the Higgs boson in 2012. Approximately 10% of the ATLAS Run 1 discovery data at 8 TeV centre of mass energy are made available for students to search themselves for the Higgs boson. 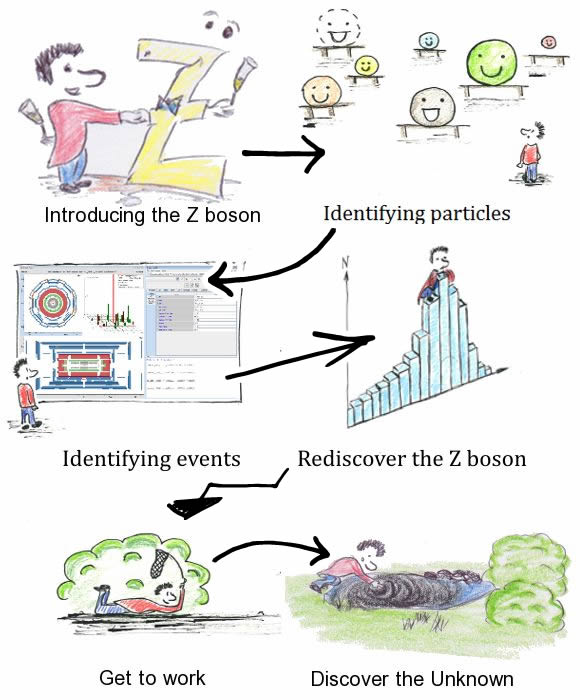 Right after the official announcement of the Higgs discovery, Higgs boson candidates were added to the Z-path program.

In 2016 Graviton resonances - related to the hypothetical mediator of the gravitational force - were included in the form of a Graviton excitation, as a follow up to the infamous 750 GeV di-photon excess observed by ATLAS and CMS in late 2015.

Now it is Dark Matter's turn, with or without Supersymmetry. New features include missing momentum in addition to the invariant mass; a key concept closely related to dark matter and Supersymmetry.

Next? We follow the "heart beats" of LHC and bring to the students any upcoming discoveries.