Volcanic activity primarily focuses at plate boundaries on Earth. But volcanoes can also form far away from plate boundaries due to plumes of hot material rising from the Earth’s deep interior. Eventually this material reaches the surface and breaks through the Earth’s crust to form a volcano – a so-called “hotspot”. Scientists now present a theory of how this type of hotspot activity can explain massive, past volcanic eruptions in Greenland and in the North Atlantic. 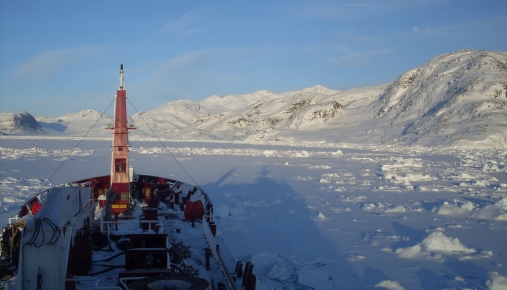 Greenland is the largest island on Earth. In central Greenland researchers have located a corridor with thinned-out landmasses running from east to west, which they explain by Greenland drifting over a stationary hotspot. The thin lithosphere assisted volcanic activities across Greenland 60 million years ago. Illustration photo: Colourbox.no

In Nature Geoscience, a group of researchers present a new theory and model of processes leading to volcanic activities on both sides of Greenland and in the North Atlantic region that started simultaneously at around 60 million years ago.

As lithospheric plates (the outer shell of our planet) move across a hotspot, volcanic island chains form. One of the most famous chains is the string of volcanoes on the seafloor that connect to Hawaii in the Pacific. Across in the Atlantic Ocean, Iceland is also a well-known site of active volcanism today that is related to a deep hot upwelling (a plume) but a similar string of volcanoes had not been previously found.

However, on Greenland and across the North Atlantic region there are vast amounts of extinct volcanoes that erupted around 60 million years ago. These volcanoes are not arranged in chains but instead are distributed over a large area, so they do not intuitively appear as traditional hotspot volcanism.

One of the authors of the article, Professor Trond H Torsvik (CEED, University of Oslo), says:

“It has remained an open question whether this widespread volcanism was caused by the Iceland plume as a single source. To address this we combined recent results from plate reconstructions, seismic tomography and geodynamic modelling to assess where the plume impacted and how and where plume material could have flowed beneath the lithosphere so as to give rise to the observed volcanism”.

However, the interdisciplinary group of scientists from Germany, Ireland, Canada and Norway demonstrate that these volcanoes can also explained by hotspot activity.

The research team, led by Bernhard Steinberger (GFZ and CEED), used high-resolution tomographic images – a technique to image Earth’s interior structure based on earthquake data – to locate a thinned-out corridor within the Earth’s lithosphere (Figure 1). The corridor they found stretches from east to west across central Greenland.

This feature may have been formed when Greenland moved westwards 90 to 60 million years ago over and across the Iceland plume (hotspot) that is still active within the Earth’s interior.

The research team reconstructed the activity of the Iceland Plume with high precision for the past 90 million years, but:

“After reconstructing the activity of the Iceland plume we were still looking for an explanation why, if the hotspot was already active 90 million years ago in the west of Greenland, volcanic activity only started about 60 million years ago.” explains Steinberger.

With a new model the scientists were able to reconstruct how hot material rising from the plume accumulated within the corridor. They found that the hot material caused the Earth’s lithosphere to be thinned out gradually, starting 90 million years ago (Ma).

Steinberger continues: “We surmise that the accumulation and flow of hot material in the Earth interior, together with the process of plates drifting apart towards East and West, caused the originally thick lithosphere to thin out over the course of millions of years. These geological processes eventually led to the eruption of volcanoes started 60 million years ago and their arrangement at both ends of the landmass”.

What is today known as the Iceland Plume was earlier centred beneath eastern Greenland at 60 Ma (Figure 1) and magma must have propagated horizontally more than 1000 km at the base of the thinned lithospheric corridor across central Greenland.

At the same time, magma also flowed southwards towards the British Isles, within an area that had undergone extensive continental stretching for several hundred million years.

“Iceland plume material flowed to the most thinned rifted lithosphere, and eventually also triggered continental breakup between Greenland and Eurasia (Norway) around 55 Ma because of upside-down drainage of the plume head”, explains Trond H. Torsvik.