Volcanism represents fundamental forces (heat and mass transfer) through the Earth’s crust that shape the Earth’s surface, influence the global climate and trigger mass extinctions. Most existing models of Volcanic plumbing systems (VPS) in sedimentary basins are too simplistic on critical aspects: (i) they ignore the magma dynamics, although magmas of contrasting viscosities give rise to very different conduit shapes; (ii) the modeled host rocks are elastic, whereas geological observations and seismic images reveal substantial visco-plastic deformation associated with intrusions; (iii) the mechanical coupling between the viscous magma and the deforming host rock is lacking.

In DIPS we aim to build a new comprehensive mechanical model of VPS in sedimentary basins that integrates (i) the realistic complex rheology of the host rocks with (ii) the viscous dynamics of compositionally diverse magmas. 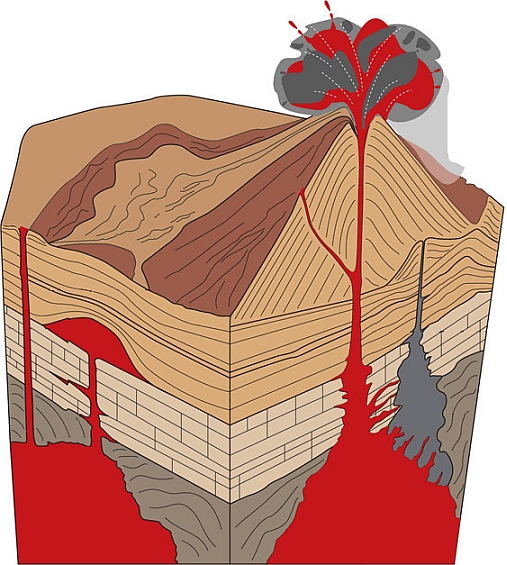 Volcanism represents fundamental forces contributing to heat and mass transfer through the Earth crust. Field and geophysical data in many sedimentary basins worldwide have shown that volcanism is linked with extensive sub-volcanic networks.

These Volcanic plumbing systems (VPS) have tremendous implications on (1) the gas flux for the volcanic system feeding the climate system, (2) the maturation, circulation and trapping of hydrocarbons in sedimentary basins, (3) the location and violence of volcanic eruptions, and (4) the formation of massive ore deposits.

Although VPS have been widely studied, first-order aspects of their emplacement dynamics are still not understood: (1) there is no unified mechanical model explaining and predicting the formation of the numerous igneous conduit shapes (e.g. dikes, sills, laccoliths, plugs, etc); (2) most existing models of magma emplacement only account for elastic host rocks, whereas geological observations show that substantial plastic and viscous deformation in the host accommodates magma emplacement; (3) most models ignore the magma dynamics, whereas the role of magma viscosity is evident.

In order to considerably expand our understanding of the dynamics of VPS, we propose a multidisciplinary project that (1) integrates quantitative fieldwork using state-of-the-art ground-based and aerial photogrammetric outcrop 3D modeling, (2) frontier quantitative laboratory experiments using the latest technical developments at UiO, (3) numerical modeling using Discrete Element Models (DEM) and (4) elasto-plastic theoretical modeling. This project has the ambition to develop a new generation of mechanical model of magma emplacement in sedimentary basins that realistically accounts for the complexity of geological systems.

The primary aim of the DIPS - Dynamics of  Igneous Plumbing Systems in Sedimentary Basins - is to bring our understanding of the dynamics of igneous plumbing systems to an unprecedented level by designing an innovative, multidisciplinary model which brings together both

The secondary goals are to:

This project is financed through the FRIPRO programme of the Norwegian Research Council.

The University of Oslo (UiO) is hosting this project, which is led by Dr Olivier Galland, in the Physics of Geological Processes Group (GEO-PGP), Department of Geosciences. Other scientists on the UiO team are Karen Mair, Sverre Planke and Dougal Jerram, Centre for Earth Evolution and Dynamics, CEED (CEO) and Anders Malthe-Sørenssen (Department of Physics).

The project links and integrates various complementary expertise from distinct research groups and departments at University of Oslo.

In addition to this UiO multi-disciplinary research team, the project team will cooperate with national and international institutions (researchers):

This group of scientists ensures the integration of various results at the interface between field geology, laboratory, numerical and theoretical modeling and will ensure excellent international network and competence building for Norwegian research.