The objective of the KeyCLIM project is to develop The Norwegian Earth System Model (NorESM) to assess performance, develop and evaluate physical processes in the modell. A special effort is addressed to the near and long term future climate for the Artic, northern latitudes and Norway. Open data from the project will be provided to the climate mitigation and climate impact community. 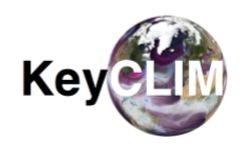 A warming of the northern latitudes in the forthcoming decades will impact the region’s hydrological cycle, the cryosphere and biogeochemical cycles, impacts which are associated with forecasted, significant changes of the Earth System functioning. It is not clear how the northern world will look like with a summer ice-free Arctic Ocean, changed atmospheric and oceanic circulation patterns and the many specific responses of the Northern Earth system.

It will require a powerful Earth System model to generate understanding of the possible future climate evolution in the North latitudes. Scandinavian and Norwegian climate will be in particular affected by Earth System changes in the North Atlantic, Arctic and adjacent land masses, thus this region is chosen to be key for this project.

Ultimately KeyCLIM shall achieve an improved picture of the near and long term future climate for northern latitudes and Norway, providing open data to the climate mitigation and impact community.

The overall primary objective of the project is to use a nationally coordinated Earth system approach to understand, quantify and reduce uncertainty in projected northern latitude climate change and in particular Arctic warming.

The KeyCLIM project will make considerable use of the Norwegian Infrastructure for Earth System modelling – INES, other related projects and research environments.

The name of the project is; Key Earth System processes to understand Arctic Climate Warming and Northern Latitude Hydrological Cycle Changes, in Norwegian: Nøkkel jordsystem prosesser for forståelse av arktisk oppvarming og endringer i nordisk vann syklus. The project is financed by Research Council of Norway through the KLIMAFORSK/POLARFORSK programme, with NFR-project number 295046.

The KeyCLIM project is a collaboration between researchers from several Norwegian research institutions.