CO2 to light olefins conversion by CASCADE reactions over bifunctional nanocatalysts: an ‘all X-ray’ approach 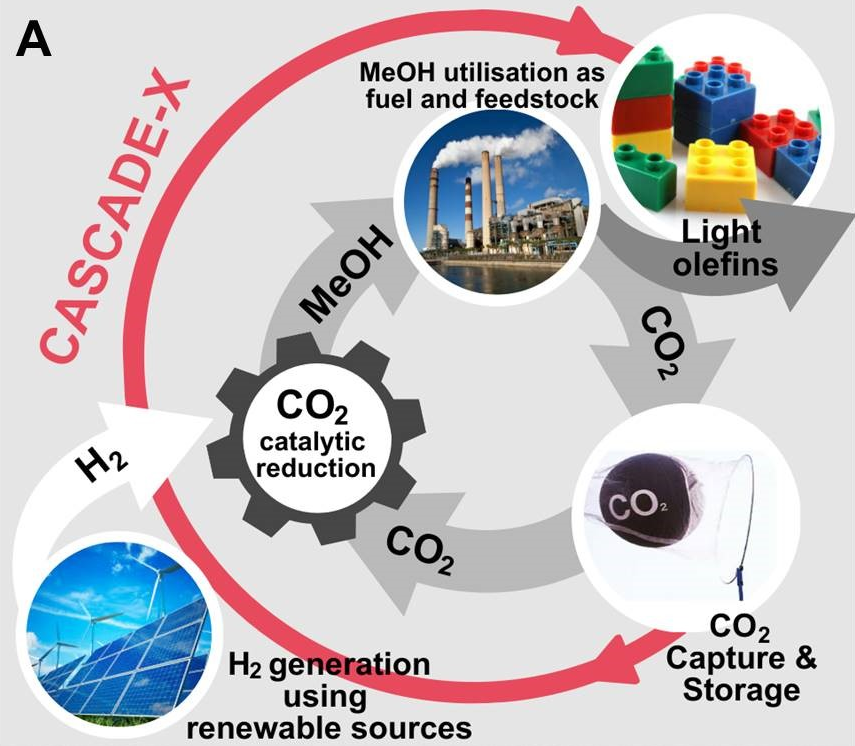 Light olefins (C2-C4) are key building blocks in the petrochemical industry, with an annual production of more than 120 million tons. They are mainly obtained from oil, but during the last decade, rising oil prices combined with the shale gas revolution were strong incentives for a gradual transition from oil to natural gas and coal as feedstock for the petrochemical industry. The use of CO2 as a raw material for the production of light olefins would be an important contribution to an anthropogenic carbon cycle through CO2 capture and re-cycling. In this context, CASCADE-X envisages an ultimate approach to directly convert CO2 to light olefins through cascade reactions over a bi-functional catalyst.

The proposed cascade process connects hydrogenation of CO2 to methanol (MeOH) and conversion of MeOH to olefins, both well-known industrial processes but requiring two reactors, individually operating at widely different temperatures (250 vs 400 °C) and pressures (50 vs 1 bar). The targeted bifunctional catalyst will be obtained by integrating, at the molecular scale, an active metal alloy for the CO2-to-MeOH reaction onto a zeotype catalyst for selective MeOH-to-olefins conversion.

The project aims at the rational optimization of bifunctional catalyst and reaction conditions for the cascade process, by gaining fundamental knowledge on properties ↔ performances relationships for the combined system and by interfacing in a positive feedback loop characterization, synthesis and catalytic testing tasks. These goals will be pursued by an ‘all-X-ray’ approach, synergizing in situ and operando X-ray absorption spectroscopy and diffraction/scattering at the laboratory and large-scale facility level in combination with complementary physico-chemical methods, to identify activity/selectivity/stability descriptors for the bifunctional catalyst.

This project has received funding from the European Union’s Programme for Research and Innovation Horizon 2020 (2014-2020) under the Marie Skłodowska-Curie grant agreement No. 793423